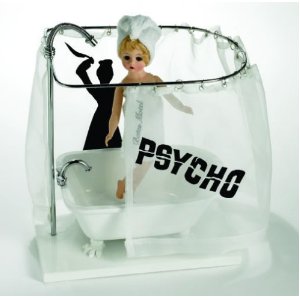 Hold on to your...shower curtain. Can you believe your eyes?

Yes. At one time, Madame Alexander actually created this doll to commemorate one of the most horrific scenes ever shown in film: the shower murder scene in Alfred Hitchcock's PSYCHO, considered by many to be a classic. Considered by me to be - not so much. But that's neither here nor there. I haven't seen it in years and it's possible I might have changed my mind.

At any rate, it's the doll I'm focused on today. (And notice she is very chastely covered with a towel.)