Book Review: Two for the price of one - POST CAPTAIN and H.M.S. SURPRISE by Patrick O'Brian 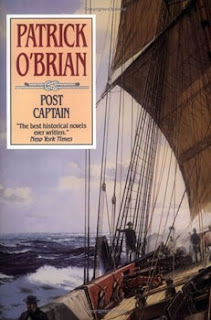 Remember how I raved and ranted (in a good way) about Patrick O'Brian's first book in the Jack Aubrey and Stephen Maturin series set in, around and during the Napoleonic wars? Link.

I was merely preparing you (and myself) for what I suspected would be a total Aubrey/Matruin immersion.

Sure enough, I read the second book, POST CAPTAIN in one great late night gulp, then picked up the third book, H.M.S. SURPRISE and read that straight through. Of course then I had no choice but to turn around and order copies of the next three books.

Reading O'Brian's stories has turned into a very exciting trip back in time for me. In fact I raved so much I've even got my brother reading O'Brian. What a beautifully written series this is. I don't think I've ever read anything like it. (Except for, perhaps, the Temeraire books by Naomi Novik set during the same time but with an element of fantasy. Now I see why Novik has been compared to O'Brian.)

What I know about the 18th and 19th century British navy I learned at the movies. And as many of you know, I tend to romanticize things - no apologies for that, just merely stating a fact. What I like most about O'Brian's books - besides the extraordinarily good writing, is that he doesn't spare us the grim reality, but doesn't mind coloring it a bit with a touch of the sea-faring romantic.

So far we've learned that Jack Aubrey is the type of battle-commander every man (or woman) would wish for. In the heat of battle, he's right there, shouting orders (some of them in incomprehensible ships jargon which I love reading aloud) slashing away with sword in one hand and gun in the other. He is totally fearless, careless of his carcass, and always ready to do his honorable duty for king and country. He is a brilliant tactician, a passable violinist,  has yellow hair and tends to put on weight.

On the negative side, he has been a bit of a womanizer in the past though lately he has been courting a certain Miss Sophia Williams whose mother is dead set against the match. The harridan is horrified to learn that Aubrey is currently penniless (his land agent ran away with his ship's winnings and left Aubrey in the lurch). To that end Aubrey is in the ignominious position of having to hide out from creditors - going so far as to disguise himself as a bear while his friend Maturin plays the gypsy leading him about the countryside on a chain. Unbelievable, but true. (Well, in the book anyway.)

If Aubrey is picked up and sent to debtor's prison, how would he then be able to take up his captain's duties when a ship becomes available? It's a quandary.

O'Brian has the gift of making you laugh even while dreadful things are going on.

POST CAPTAIN is the most Jane Austen-like (but with blood and guts) of the three books I've read so far. Probably because of the necessary social niceties in dealing with women characters of that era. Aubrey is in a marrying mood so we wait to see what happens next.

As for Stephen Maturin, ship's surgeon and British spy - we've learned that despite his thin, weathered, leathery physique, he is extraordinarily hale and hearty. He studies all aspects of biology and collects bug and small animal specimens, speaks several languages and owns a run-down castle in Spain. He has also, sad to say, given his heart to a totally undeserving woman who, last time we looked, had run off with a rich American. But I'm getting ahead of myself.

Loving the social interaction as much as I do, it's still the sea-going adventures that especially fascinate me. Though there is lots of jargon that is at times, incomprehensible,  I seem (to my surprise) to understand most of what goes on, ship-wise. I've always loved sea-faring adventures at the movies but these books surpass anything I've seen on the big screen. (Though the movie MASTER AND COMMANDER with Russell Crowe was excellent. Crowe made for a very believable Jack Aubrey and Paul Bettany is the perfect Stephen Maturin. I do so wish there would be a sequel.)

In POST CAPTAIN, Aubrey is captain of a clunker of a ship that he simply 'cannot love'. But even so, he still manages to do the impossible - wading into the middle of a huge sea battle and coming out ahead. Action, suspense, daring-do, swash and buckle AND two love stories. What more could you want?

Well, in H.M.S. SURPRISE, Aubrey is master - finally, of a frigate. A ship he loves. (Turns out that the relationship between a captain and his ship is rather a romantic one.) He must guide the H.M.S. Surprise through relatively calm waters (much to his chagrin, since Aubrey is itching for the spoils of war) to the Indian sub-continent acting as escort to ships of the East India Company.

When the inevitable fight finally comes, they meet up with an old enemy (from the first book, MASTER AND COMMANDER) engage in a spectacular sea battle in which we learn as never before (at least for me) how it is that ships must maneuver in and around each other to gain fighting advantage - how they avoid the phalanx of cannons or not, depending on their position. How ships' captains pit their wits and courage, occasionally saluting each other in face to face defeat or during bouts of extraordinary gallantry.

The maneuvering tactics had just never occurred to me. I really do enjoy learning all this minutia.

I have the next three books lined up and ready to go. I am loving this series. Enthusiastically.

If you haven't seen the movie, don't wait. It is truly quite wonderful. I'm not a big fan of Russell Crowe, but I admit I loved him as Captain Jack Aubrey.