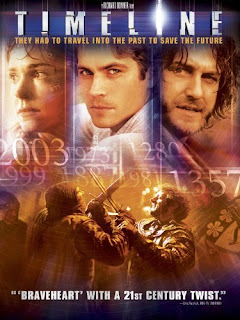 TIMELINE (2003), directed by Richard Donner, is one of those movies that should have been much better than it is but somehow manages to be good enough to recommend. I'd read the book by Michael Crichton a few years ago and therefore, watched the movie with my fingers crossed.

I really had enjoyed the book, probably because I am inclined to like time travel stories. Screenwriters Jeff Maguire and George Nolfi do their best and come up with a pretty good adaptation of what was originally a huge complex novel.

Of course, if it's a Crichton story, you know there's going to be lots of technological mumbo-jumbo and the movie is no exception. (Nor, for that matter, was the book.) Just roll your eyes and push on - that's what I do. There are just some things I am not meant to understand. I accept it. 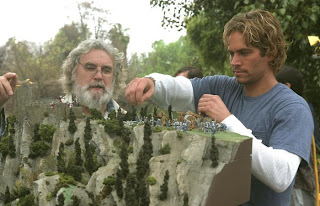 But still I am a huge fan of time travel plots and TIMELINE is one of my favorites (really there aren't that many others) though the cast of actors aren't all that memorable and really, are just good enough. Well, except for Billy Connolly (why doesn't this man work more - he is such an arresting screen presence) and Gerard Butler who steals the show as hunky Andre Marek, though he gets third billing on the official poster.

The story's premise is actually quite good: A sinister corporation known as ITC is developing a time travel gizmo which, I believe, starts out to be something else. At the same time the company has sponsored a group of college students headed by Archaeology professor Edward Johnston (Billy Connolly) to excavate an area in France known as Castlegard, the site of a bloody 14th century battle during the 100 Years War. The group has made some interesting finds.

But suspicious of some of the data fed them from ITC, Professor Johnston flies back to company headquarters to see what's what.

Before you can say back to the future, Johnston travels back in time to 14th century France but fails to return. The special effects of time travel, by the way, are dandy - entirely credible. Well, if you are inclined to favor this sort of wizardry, that is. In time travel, suspension of disbelief is key. 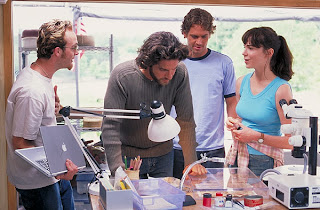 The students - one of whom, Chris Johnston (Paul Walker) is the Professor's son - are unaware of what has occurred. That is, until they make a rather startling discovery back at the site in France: a pair of bifocals and a letter written by the Professor which dates back to the 14th century.

They then travel to ITC headquarters to find out what's what. Once there, they are shown the time travel gizmo and told of Chris's father's trip back in time. The students - Andre Marek, Chris Johnston and a couple of others, decide they must go back as well to rescue the Professor. 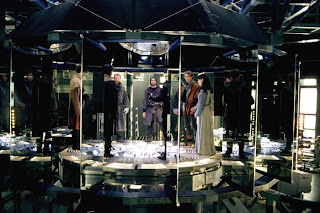 Obviously, in a lengthy Michael Crichton story, there's lots left out, but lots left in. Some of it makes sense, some doesn't. But somehow it all works pretty well if only you pay attention and not worry too much. 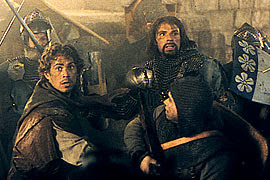 Once the modern day group arrives (properly attired) in Medieval France - not the safest place on the planet at that particular point in time - they are in constant danger. Local knights and their minions are waging pitched battles, a castle is under siege and chopping off people's heads appears to be an enthusiastic past time. They also stumble across an ITC employee who has been left behind after the time travel gizmo played havoc with his DNA and internal organs. (A little side-effect the ITC corporation would rather no one know about.) 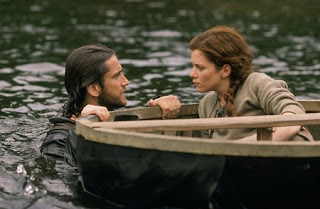 The costumes, the art direction and general Medieval atmosphere are believable - they didn't call them 'the dark ages' for nothing and it's all lots of improbable movie fun. I just shut my eyes if I feel a beheading or cross-bow or sword hacking incident coming on. There's also a love story between Gerard Butler's character and a local Medieval lass, which affects the outcome of the story. And near the end, the main ITC bad guy, the very unappetizing David Thewlis, gets his in a very satisfyingly ironic, time-related way.

I say, if you have the patience, read the book. If not, watch the movie. I liked both, with the book having the slight edge. (Though of course the book doesn't have Gerard Butler.) 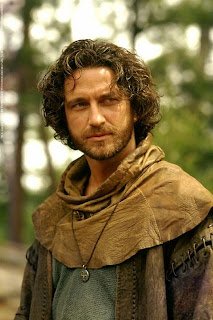 And no real reason to show this pix of Gerard Butler in costume but, really - do I need one?