Hi everyone! I'm back to what passes for normal around here. I've been resting and relaxing, taking it easy, playing on Pinterest, reading (though not as much as I wanted to) and dealing with 'stuff'. All is well and once again I'll be posting regularly beginning today. Thanks for being so patient.

Well, if it's Tuesday, it's Overlooked (or Forgotten) Movie Day, so I'm jumping right back into the swim of things with my favorite weekly meme. Don't forget, as usual, to check in at host Todd Mason's blog, SWEET FREEDOM to see what other movies and/or TV shows other bloggers are talking about today.
Link.

GOLD DIGGERS OF 1933 starring Joan Blondell, Dick Powell, Ruby Keeler and Warren William is a very early pre-code movie musical - a favorite of mine. It was directed by Mervyn LeRoy with super splashy, over-the-top singing and dancing numbers staged by the great mesmerizer Busby Berkeley. 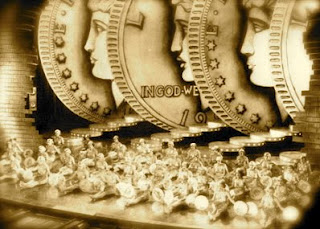 Chorus girls apparently about to be mowed down by giant nightmare dimes.

From the absurdity of the 'We're In the Money' opening sequence (a bit of Hollywood irony since the movie was made while an actual Depression was going on in the country) with poor Ginger Rogers in tacky costume (a large dime hanging front and center) singing lyrics in pig Latin we know we're in for some extreme silliness. 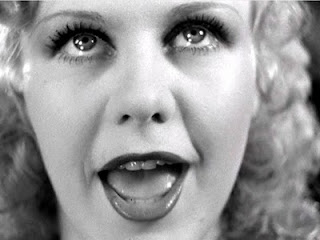 Sure enough we are soon treated to scantily clad young women stripping in silhouette, dancing neon violins, cops on roller skates, a snow storm (on stage) with giant snow balls photographed from above and rain showers in the 'Petting in the Park' scene (surely one of the more obnoxious songs ever written) and Dick Powell making googly eyes (literally) at Ruby Keeler whose singing voice I can only compare to fingernails scratching on blackboard. 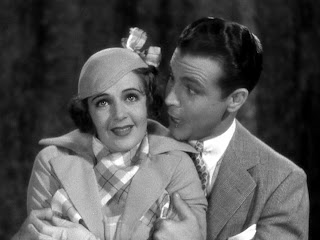 Ruby Keeler and Dick Powell petting in the park.

Her dancing is kind of odd too - she was one of those who tended to dance hunched over. 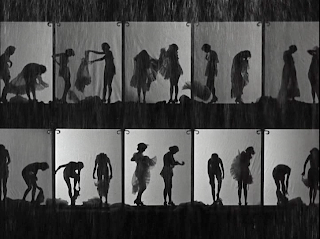 The chorus stripping behind shades. Remember, this was pre-code Hollywood. 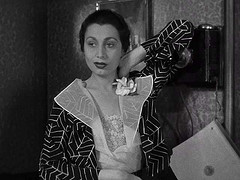 How do I look? It'll take more than a corsage to cheer up Aline MacMahon's prune face.

There's just something so endearing (and sexy) about Warren William playing a snobby Boston high society type who gets his comeuppance when he falls head over heels for showgirl Joan Blondell. He and she get to share a very special love scene when he tells her: "Every time you say 'cheap and vulgar' I'm going to kiss you." Of course, she can't resist saying it. Now that's a love scene. 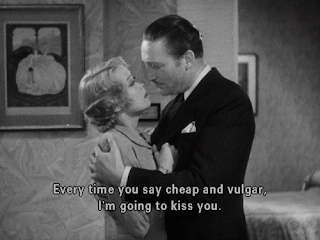 I'm also very fond of the preposterous 'Remember My Forgotten Man' razzle dazzle sequence which ends the movie. Some of the images are rather haunting considering this is basically a fluffy movie musical. 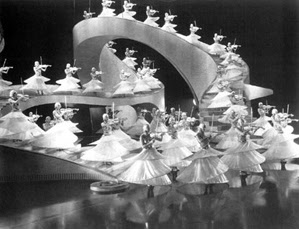 The good old days of the Great Depression.

But as Ned Sparks' character says earlier on, "This show is all about the depression!" Well, it really isn't, except for the last number, but the girls in the movie are feeling the pinch (in more ways than one) as they try to wangle show biz jobs and catch-up on the rent. 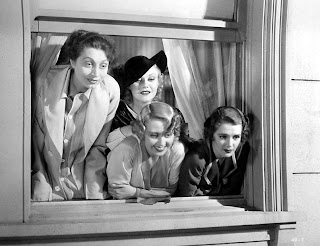 That's Ginger Rogers with the hat on. She's dropped by to visit.

Carol (Joan Blondell), Trixie (Aline MacMahon) and Polly (Ruby Keeler) live together in a cramped apartment hardly able to make ends meet. But this is Hollywood, so being poor is made to look like a romp. (The girls do have some pretty dishy undergarments.) Polly even goes so far as to pilfer a milk bottle from a neighbor's fire escape. After all, a girl's got to have her milk. 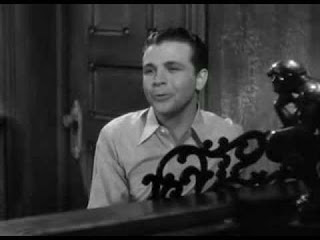 Dick Powell as Brad the singing and slumming millionaire.

The basic plot is this:

Goofy Brad (Dick Powell) is living incognito (he's really a Boston millionaire) just across the way from Carol, Polly and Trixie. Already he and Polly are making goo-goo eyes at each other having met previously and fallen instantly in love. He's a song writer hoping to make it big on the great white way and in fact, once Barney (Ned Sparks), the impresario, hears his songs, he wants Brad to write all the music for his latest show. 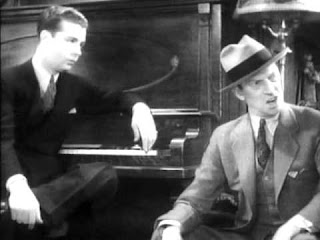 Dick Powell and Ned Sparks at his growliest.

But when the latest backer...uh, backs out, Brad steps in and offers to advance Barney the fifteen thousand bucks necessary to open the show and make Polly a star. The girls think he's kidding them about the money but he turns up in the morning with a wad of cash. (Trixie thinks he might be a bank robber currently on the lam.) 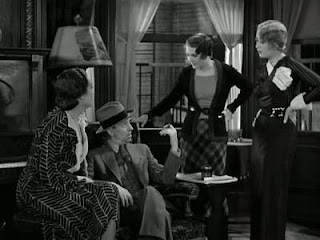 Brad's family (including his older brother Lawrence - Warren William) threatens to disown him if he marries a 'cheap and vulgar show girl'. So big brother and Peabody (Guy Kibbee) the family lawyer arrive on the scene the moment they discover what Brad is up to. But Lawrence mistakes Carol (Joan Blondell) for Polly and the girls then decide to teach him a lesson by pretending to be gold diggers. Lawrence, in the meantime tries to lure 'Polly' (Carol) away from Brad who thinks the whole charade is a 'swell' idea. Well, of course, Lawrence gets hoisted on his own petard when he falls for Polly/Carol. 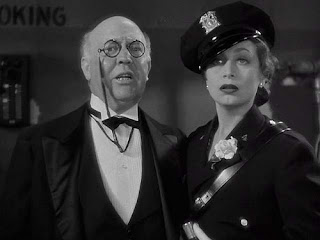 Guy Kibbee and Aline MacMahon - she's dressed like a cop for a dance number or else she's just arrested her future husband.

Peabody the portly lawyer, in turn, falls for Trixie and Brad and Polly run off and get married. There are scowling confrontations between big brother and Brad and threats of annulment  - though how one brother can annul another brother's marriage is beyond me. 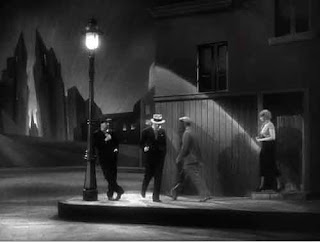 But everything turns out 'swell' in the end and Joan Blondell gets to do the big Forgotten Man number which, in parts, is actually quite moving. Can you remember any other musical which show-cased a bread line in its stark reality, not to mention soldiers coming back from the battlefield wounded, bleeding and dazed with terror? Berkeley shows 'em all and more. All set to a very stirring marching song. "Remember my forgotten man, you put a rifle in his hand. You shouted hip hooray but where is he today?" 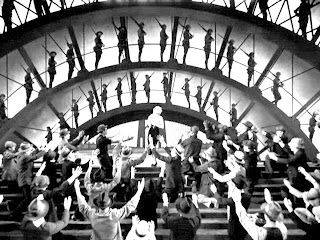 In reality, Joan Blondell and Dick Powell would later marry proving the old adage that for every man there's a woman somewhere willing to overlook his inherent goofiness. But that's a story for another day.

P.S. And isn't 'Ned Sparks' just about the best name for an actor ever?