The brilliant creator of Nero Wolfe and Archie Goodwin was born today in Noblesville, Indiana. As a young man, Rex Stout served in the Navy aboard President Teddy Roosevelt's yacht. He invented a school banking system which paid him royalties and enabled him to travel. He wrote for the pulps, and in several genres, including science fiction, before he found his niche in the mystery novel.

Prior to WWII, Stout was an avid proponent of Franklin Roosevelt's New Deal. He was an unabashed liberal and anti-communist who served on various propaganda making organizations during the war.

After the war he moved to an estate in Brewster, New York and served as President of the Author's Guild as well as the Mystery Writers of America which presented him with the Grand Master Award. He was also a member of the original board of the American Civil Liberties Union.

FER DE LANCE, published in 1934, was the first novel featuring the one and only Nero Wolfe, cranky genius, orchid lover, gourmand and reluctant private eye. The 'best detective north of the South Pole,' at least according to his alter-ego, associate, body-guard, bookkeeper and general all around weisenheimer, Archie Goodwin. 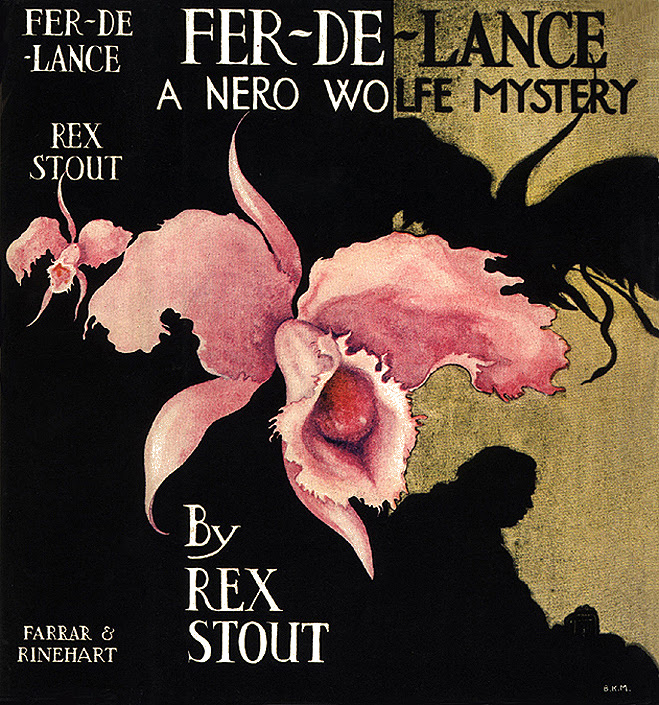 Stout went on to write 47 Nero Wolfe novels as well as many short stories featuring his entertaining duo. He also wrote stand-alone novels and created three other crime fighters:
Theodolinda Dol Bonner, a NYC private eye who appeared in her own book as well as occasionally in a Wolfe story, Alphabet Hicks who also appeared in one book, and Tecumseh Fox who appeared in several. For a complete listing of all of Stout's work, please check here.

To learn much more about Rex Stout, please use this link  to his Wikipedia page. and/or this link to the Wolfe Pack, the Rex Stout and Nero Wolfe veneration society which meets once a month in Manhattan for good food, good drinks and good talk about one of the great writers of the 20th century.