Favorite Books Of The Year. 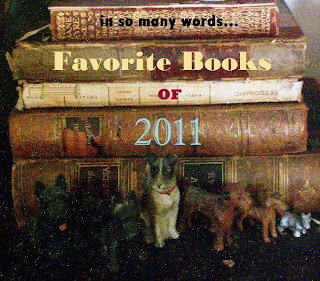 I decided to separate the Vintage from the More Recent Pub. Date Reads. Made more sense to me that way, especially when my reading for 2011 seemed to be in half and half mode.

Also thought it only fair to omit re-reads from Best Of consideration. I generally assume that any book I'm re-reading is already a 'best'.

2011 was a great year for books (despite the naysayers) and I loved many of them. (As you know, I rarely finish a book unless I'm enjoying it.) But, we're all enamored of lists and in the end, I decided to add yet another to the year end phantasmagoria of lists.

So, without further ado, here are my 2011 year end lists:

1) THE WOMAN IN WHITE by Wilkie Collins

3) A COFFIN FOR DIMITRIOS by Eric Ambler

7) THE EPISODE OF THE WANDERING KNIFE by Mary Roberts Rinehart

8) THE TALISMAN RING by Georgette Heyer

9) THE MOVING TOYSHOP by Edmund Crispin

12) JOURNEY INTO FEAR by Eric Ambler

1) THE AMAZING ADVENTURES OF KAVALIER AND CLAY by Michael Chabon

2) THE IRON HEART by Marshall Browne

7) AN UNCOMMON READER by Alan Bennett

12) ENSLAVED BY DUCKS by Bob Tarte

Most of these were reviewed, so if you want to check them out, please enter the book title in the Search Box at the bottom of the blog.

Many thanks to you again for following and commenting and otherwise making your interest in my blog known to me. This is very much a joint venture.