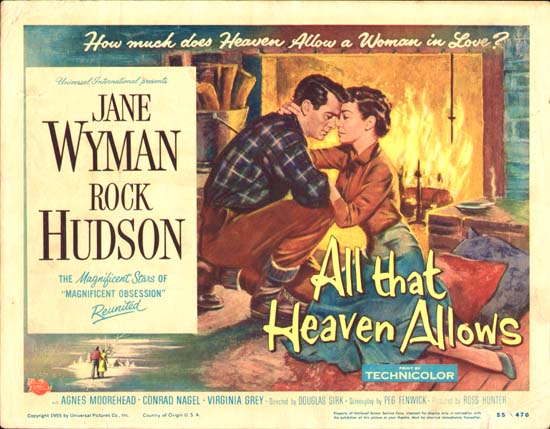 It's Tuesday once again and that means: Overlooked or Forgotten Films - a weekly meme hosted by Todd Mason at his blog, SWEET FREEDOM. Don't forget to check in and see what other overlooked or forgotten films other bloggers are talking about today.

Producer Ross Hunter and director Douglas Sirk were known for their larger than life full color interpretations of small-town living, the melodrama lurking behind the manicured suburban facades of the 1950's.

The lush soundtracks were musically overwrought with plenty of piano and violin to underscore the intense emotions being played out on screen.These films were called 'tear-jerkers' and 'women's pictures'. But that didn't stop some of them from being terrific movies. 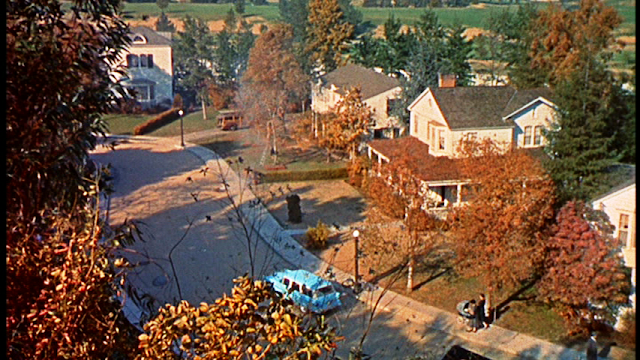 In 1955's ALL THAT HEAVEN ALLOWS, starring Rock Hudson and Jane Wyman, we get a May/December romance between a lovely older woman and her hunky gardener. A liaison frowned on by everyone (who's anyone) in town. 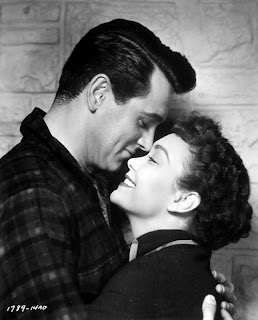 Wyman plays Cary Scott, a lonely widow whose college age son and daughter are rarely home. She finds herself with too much time on her hands, rattling around her large house, at odds and ends since most of her friends are married and busy with their own lives.

In these sorts of communities, attractive widows really do have a hard time of it - at least according to the movies.

Cary's best friend, Sara Warren (Agnes Moorehead) is one of those take-charge types who wants her friend to hook up with one of the few elder beaus left in town.

Sara convinces Cary to attend a party at the country club and we get to meet Cary's circle of well-meaning and not so well-meaning friends, including Harvey, the older guy everyone thinks is the appropriate date for her. But we're meant to see that Cary feels uneasy even among all her supposed friends - it registers on Jane Wyman's very expressive face. We're meant to think that Cary, despite being of the same social class, is not really a country club sort. She's just too sensitive.

When the local married Lothario makes a heavy handed pass at her, she is repulsed. 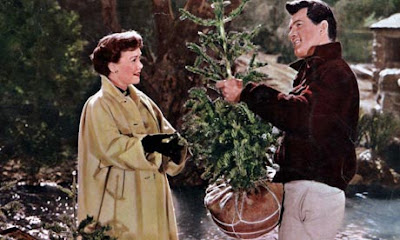 We discover that Cary is intrigued by her young gardener, Ron Kirby (Rock Hudson), the son of her family's original gardener who has since passed away. Ron has plans for a Christmas tree farm and, I think, some sort of landscaping business. (He drives a 'woody' station wagon!) Earlier that day, he and Cary had chatted over coffee and he'd impressed her with his tree-lore - so different from the empty cocktail chatter she would hear that night at the club. 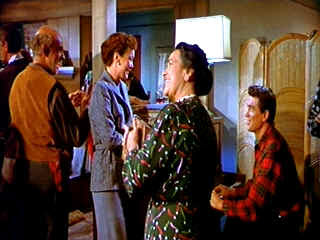 As she learns more and more about Ron and meets his down to earth friends who think nothing of sitting around a fire and singing songs (!?), Cary is quite taken by what she perceives to be, their free spirited way of life. Why, they even know someone named Manuel (Nestor Paiva)! Nothing at all like the more constricted life she's used to. 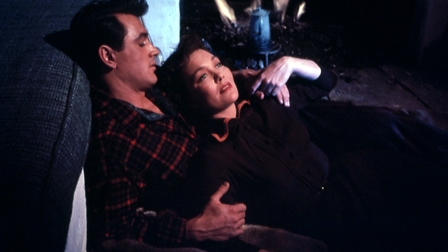 It's telling that earlier in the movie, Cary and her daughter Kay (Gloria Talbot) have a conversation as Cary is dressing to go to the club and Kay expounds that "...sex is incongruous as you get older" or words to that effect. Kay is studying psychology at Princeton. She also talks about how widows in some country or other used to be walled up with the husband's dead body and his possessions - the neighbors would see to it this was carried out.  "Of course, that doesn't happen anymore."

"Doesn't it?" says Cary, under her breath. So we know from the beginning, that Cary is antsy, but antsy in a lady-like way. 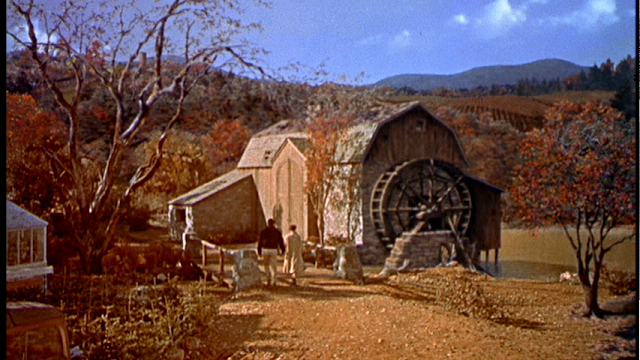 Cary is especially taken with Ron's future residence - an atmospheric old mill he is thinking of renovating. 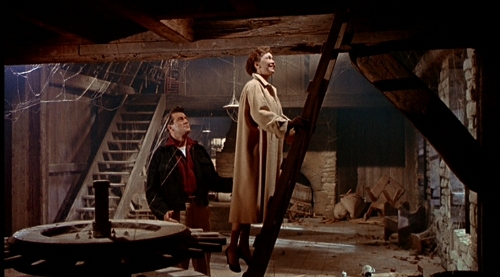 When it's obvious that Ron is serious about Cary and she about him, she attempts to involve Ron in her country club life. Cary introduces him to her friends who are all aflutter at this handsome young stud in their midst. My dear, imagine, the gardener! 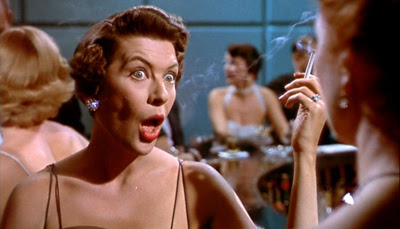 The  men are unsettled because there's an Alpha-male to deal with and the women are jealous because, well, Ron is so incredibly handsome and tall and Cary is THEIR age, for goodness' sake. 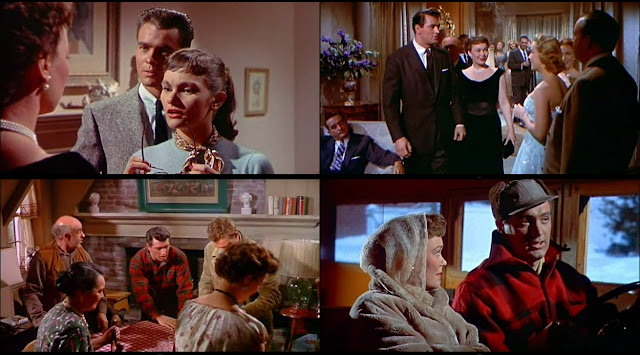 Needless to say, it doesn't work as well as Cary had hoped. Ron just doesn't fit into her social life. Though earlier, Cary had easily fit into Ron's circle of caring friends.

Cary is unsettled by the harsh criticism and ugly gossip. She stands up to it for a while because she has fallen deeply in love with Ron, but...

It's up to her two  kids to do their selfish best to break up Cary and Ron by playing on mom's insecurities. Her son Ned by saying she's being ridiculous and her daughter Kay by saying she's ruining her life - buckets of tears to follow.

Around the holidays, Ron and Cary have an argument and break up. 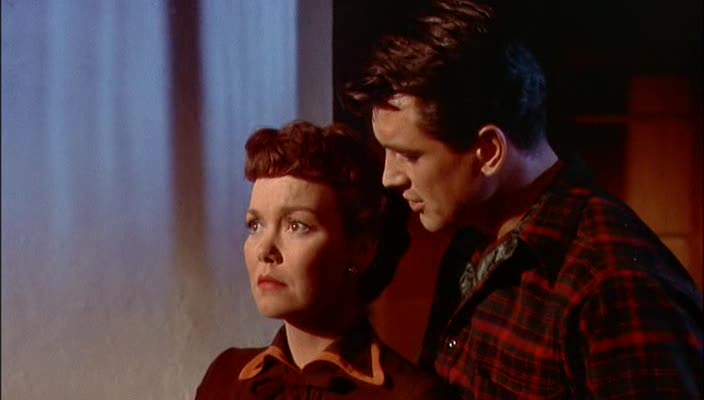 She simply will not go against the objections of her two children - even if they are grown up. She is being very foolish, but Jane Wyman makes it all work. Cary wants to do right by her family. 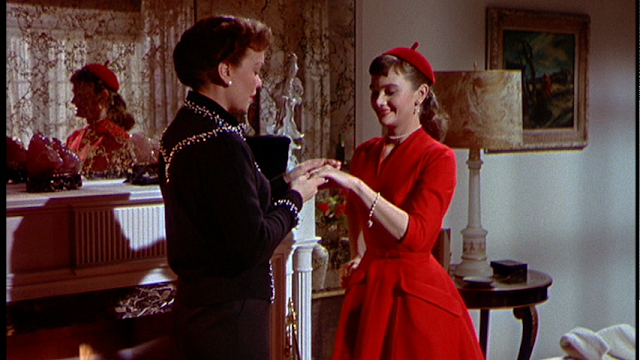 She then finds out that her daughter plans to be married and will, therefore no longer be living at home. Her son too is moving away for business reasons. So for Christmas they've bought her a television set for company, so she won't be lonely anymore. 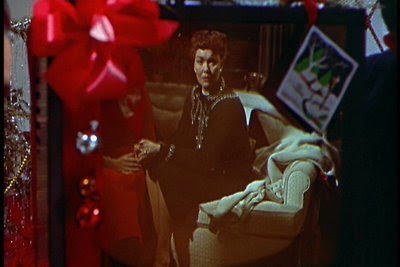 Cary says, bitterly, "It was all for nothing..." Your heart just breaks for her. It's really a well done scene. Once Kay finally sees her mother's heartache, she breaks down and apologizes for being a spoiled brat. 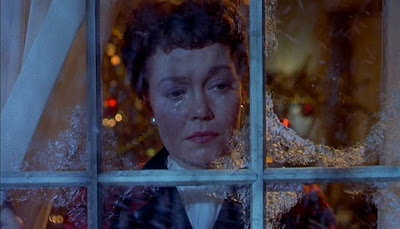 When Cary learns that Ron has suffered some sort of accident in the woods, she rushes to his bedside at the mill and they are reconciled in a wonderfully touching, happily-ever-after scene. 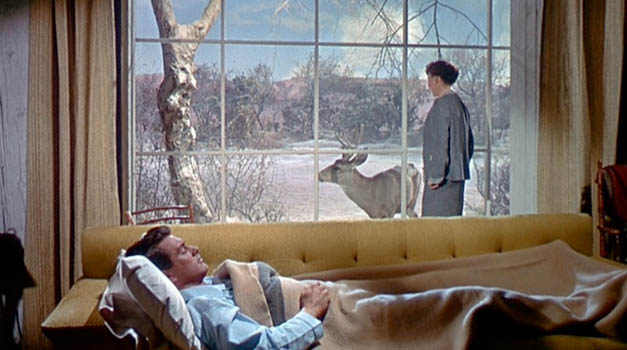 Such a romantic film to watch at this time of year. A cup of tea and a cookie or two wouldn't be amiss. Just tuck yourself in and get ready to sigh with contentment. 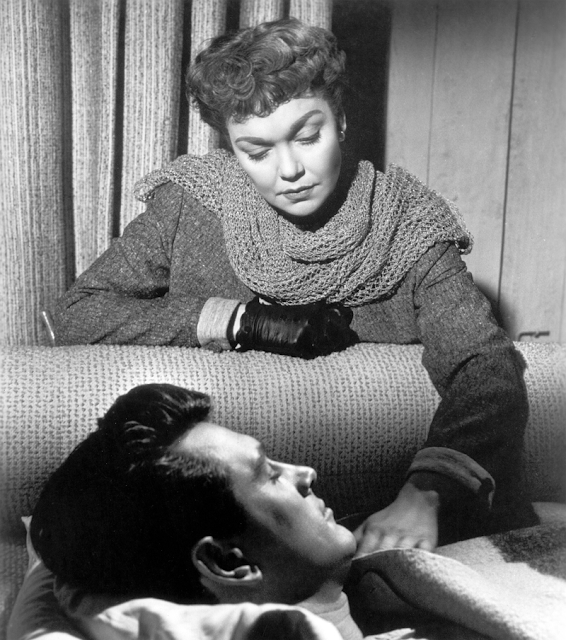 Director Douglas Sirk's splashy melodramas were used as a template by director Todd Haynes in 2002. His homage to Sirk, FAR FROM HEAVEN, starred Julianne Moore, Dennis Haysbert and Dennis Quaid. But the secrets revealed in this story were those that would have been impossible to film in 1955. (Though the story is set in the 50's.)

Haynes captured the brilliant color tones and camera angles used by Sirk and on the whole, it's an enjoyable, if ultimately unsatisfying, film. Julianne Moore is the image of Virginia Grey who co-starred in ALL THAT HEAVEN ALLOWS as the wife of Mick Anderson (Charles Drake), Ron's landscaping friend. To learn more about FAR FROM HEAVEN, please use this link.
Posted by Yvette at 10:25 AM