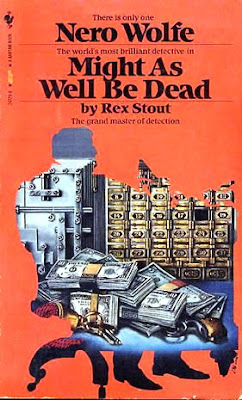 Nero Wolfe, the rotund genius of detection and his wise-cracking henchman, Archie Goodwin, must outrun the clock to save a wrongly convicted man from the electric chair.

This is my favorite Nero Wolfe book - I've lost track of how many times I've read it. And mind you, I've read all 33 Nero Wolfe books and as many of the novellas and short stories as I could find and in general am extremely fond of them all. Though of course, I have a whole list of special favorites, but MIGHT AS WELL BE DEAD is the novel I turn to more often than not when I'm in the mood for a Wolfe re-read. This particular story just never gets old for me. And it is so well set up by Stout.

James R. Herrold, a stiff-necked hardware businessman from Nebraska hires Wolfe to find his son. The young man was given a raw deal years before and the family wants to make it up to him. Paul Herrold was accused of embezzling a large amount from his father's firm and immediately kicked out of hearth and home. But come to find out, years later, the boy has been proven innocent by circumstances which don't concern us except that they have led his father to travel to NY. Paul has sent Christmas and birthday cards to his mother and sisters postmarked NYC each year since his disgrace, so apparently that is where he dwells. Wolfe almost immediately deduces that he must be living under an assumed name.

Now, at the moment, there is a murder trial going on in the city. The victim was a man of somewhat shady background who was married to a beautiful young woman who should have known better. At any rate, she (coming to her senses rather late in the day) is assumed to have been involved with a certain Peter Hays, a young advertising copywriter who had fallen for her and it is he, who is now on trial facing conviction for the murder of her husband. The evidence seems overwhelming, including the fact that Hays was found at the scene of the crime with the murder weapon in his pocket AND was foolish enough to get into a scuffle with the cops. He has since refused to cooperate with the police, his attorney or anyone else who desires to know what, when, where and why. In fact, he refuses to speak at all or help in any way with his defense.

Not for nothing are we fans of whodunits and detective fiction; with this set-up, you know what happens next.

Turns out that Peter Hays is none other than the aforementioned and much maligned Paul Herrold of Nebraska. And here he is again, years later, once again done in for a crime he hasn't committed. We learn that bit of truth rather quickly but that's what we would expect once Wolfe decides that Paul Herrold and Peter Hays must be one and the same - a guy who if he didn't have bad luck wouldn't have any luck at all.

Once Hays is convicted (just a few pages into the story), the rush is on (without his cooperation) to find out what actually happened.

The case itself was initially put together by Inspector Cramer (head of NYC Police Homicide Division) and his men. They do not take it very well that their work has apparently convicted an innocent man. Cramer is an old favorite around the 35th street brownstone and when he shows up, sparks generally fly. It is to his credit though, that he recognizes Wolfe's rather annoying bouts of brilliance and even if they are not friends, they are not exactly enemies - both working for the same side.

"Cramer's sharp gray eyes, surrounded by crinkles, were leveled at Wolfe's brown ones. He was not amused. On previous, occasions, during a murder investigation, he had found Wolfe a thorn in his hide and a pain in his neck, but this was the first time it had ever happened after it had been wrapped up by a jury.

"I am familiar," he said, "with the evidence that convicted Hays. I collected it, or my men did."

"Pfui. It didn't have to be collected. It was there."

Since the solution to the crime had seemed at first glance to be self-explanatory and Peter Hays such a convenient murder suspect, it's hard to blame Cramer for accepting him as a gift to be quickly brought to trial. But still - once Wolfe gets on the case, it becomes obvious that the crime was never investigated as thoroughly as it might have been.

And once the case is re-opened, more murders occur as a ruthless killer is frightened into desperation.

Some of the chit chat between Wolfe and Archie:

"I don't know." I sat. "She's either a featherbrain or a damn good imitation. She starts every other sentence with 'Oh' You'd walk out on her in three minutes. She drinks four parts ginger ale and one part gin."

"Good heavens. Did you?"

One of several pithy Archie observations:

Tom Irwin, with his dark skin and think little clipped mustache, looked more like a saxophone artist than a printing executive, even while holding his wife's hand. His wife, Fanny, was obviously not at her best, with her face giving the impression that she was trying not to give in to a raging headache, but even so she was no eyesore. Under favorable conditions she would have been very decorative. She was a blonde, and a headache is much harder on a blonde than on a brunette; some brunettes are actually improved by a mild one.

And of course, the gang's all here: Fritz and Saul and Fred and Orrie and Johnny.

But in addition, Peter Hays' lawyer Albert Freyer (who believes fervently in his hapless client's innocence) is a stand out. As is Peter Hays himself, a sad lumpkin of a dejected fall guy - someone who has been so badly knocked about by life, one hardly blames him for being a gloomy gus. (Though if I were him I'd wonder what it was about myself that had caused me TWICE to be wrongly accused and convicted of crimes.)

I also like that Wolfe's lawyer/friend Nathaniel Parker plays a larger than normal role. AND, last but not least, I like that there's more than one murder to liven up events. Though one of the murders hits too close to home for Wolfe and Archie and adds a personal impetus to the search for a vicious murderer.

A proviso: the truth is that the initial crime unravels very briskly once the killer makes a stupid mistake and one wonders that the cops could have been so ham-handed in following up on certain rather evident inferences. But I guess when fate is kind enough to hand you an on-scene, practically caught-in-the-act murderer, the rest is duck soup, investigation wise.

All in all, a more than terrific book which I do not think I'll ever grow tired of re-reading.

Since it's Friday, (and Rex Stout Day) don't forget to check in at author Patricia Abbott's blog, Pattinase, to see what other forgotten or overlooked books other bloggers are talking about today.