Friday Forgotten (or Overlooked) Book: TO SAY NOTHING OF THE DOG by Connie Willis 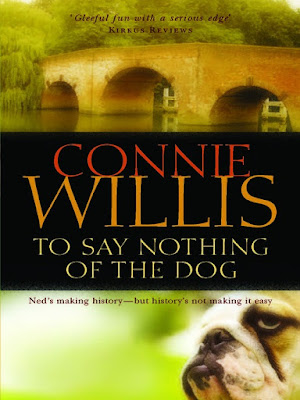 I'm not, normally, a HUGE reader of science fiction or even fantasy (though having said that, I do actually read some - I'm not a complete knucklehead) and therefore I'm not sure how to approach this post because I know there are many hard-core sci-fi and fantasy fans out there who will quibble with my effrontery. Me not being an expert and/or a REAL hardcore fan and all.

Nevertheless, I do appreciate Connie Willis who, for whatever reason, is apparently not the first name anyone thinks of when called upon to make a list of sci-fi favorites. (I understand that it's not called sci-fi anymore, but humor me. I like the sound of it).

To my mind, Willis has, so far, written three masterpieces, 1) DOOMSDAY BOOK, 2) PASSAGE and 3) the book we're talking about today. While the first two are dark, foreboding and very moving, this third book is hilarious even if it is sometimes thought of as a sequel (of sorts) to the infinitely more somber DOOMSDAY BOOK. I don't, however think of it that way, so don't worry about it. The only thing the two books have in common is the actuality of a time travel apparatus and a couple of characters if I'm remembering correctly. (PASSAGE, on the other hand, is a mesmerizing stand-alone with a shocker of a 'stop in your tracks' surprise halfway through.)

TO SAY NOTHING OF THE DOG (1998) owes its catchy title to Jerome K. Jerome's paean to Victorian leisure and the antics of three inept but jovial chaps: THREE MEN IN A BOAT (To Say Nothing of the Dog) published in 1889. Both books feature a long and somewhat leisurely boat trip down (or is it up?) the Thames between Kingston-Upon-Thames and Oxford. A similar trip is taken (as part of a more goal oriented agenda) by Ned Henry, a time weary (kind of like jet lag but without the jet) traveler from mid-21st century Oxford who must shuffle back and forth in time in pursuit of arcane knowledge.

It is 2057, Coventry Cathedral (destroyed by the Nazis in WWII) is being rebuilt and time travelers are busy plucking precise minutiae from the past. In return for a sizable donation (what we would call a grant) from the coffers of a certain Lady Schrapnell (whose self-appointed task it is to rebuild the Cathedral - something to do with her family's history), the technicians and apparatus of the Time Travel section of Oxford University have been made available to the somewhat crazed benefactor.

Nothing must go wrong at the great 'unveiling' of the Cathedral. And to that end, Lady Schrapnell has run amok, not caring about the hazards of time travel wear and tear, not to mention the dreaded 'slippage' and the vagaries of the entire time travel structure - she is only interested in results! And lately, to be sure, the Bishop's Bird Stump - a hideous Victorian artifact which must be located and placed in its niche if the Cathedral is to appear EXACTLY as it did before the bombing. Ned Henry, an exhausted traveler suffering from time lag syndrome is forced to trek back yet again after an unforeseen 'incident', the results of which may throw the entire time space continuum into a conniption.

"Oh, good, you're here, Mr. Chiswick," Mr. Dunworthy said. "I want to talk to you about an incident concerning - "

"And I want to talk to you about Lady Schrapnell," Chiswick said. "The woman's completely out of control. She pages me night and day, wanting to know why we can't send people more than once to the same time and place, why we can't process more drops per hour even though she has systematically stripped me of my research staff and my net staff and sent them running all over the past looking at almsboxes and analyzing flying buttresses ." He waved the bleeping handheld. "That's her now. She's paged me six times in the last hour, demanding to know where one of her missing historians is! Time Travel agreed to this project because of the opportunity the money afforded us to advance our research into temporal theory, but that research has come to a compete stop. She's appropriated half my labs for her artisans, and tied up every computer in the science area."

He stopped to punch keys on the still bleeping handheld, and Mr. Dunworthy took the opportunity to say, "The theory of time travel is what I wanted to discuss with you. One of my historians - "

Chiswick wasn't listening. The handheld had stopped bleeping, and now it was spitting out inch upon inch of paper. "Look at this!" he said...

Mr. Dunworthy broke in. "What would happen if an historian brought something from the past forward through the net?"

"Did she ask you that?" he said. "Of course she did. She's gotten it into her head to have this bishop's bird stump she's so obsessed with if she has to back in time and steal it. I've told her and told her, bringing anything from the past to the present would violate the laws of the space-time continuum, and do you know what she said? 'Laws are made to be broken.'

He swept on, unchecked, and Mr. Dunworthy leaned back in his desk chair, took off his spectacles, and examined them thoughtfully.

"I tried to explain to her," Chiswick said, "that the laws of physics are not mere rules or regulations, that they're laws, and the breaking of them would result in disastrous consequences."

"That is impossible to predict. The space-time continuum is a chaotic system, in which every event is connected to every other in elaborate, non-linear ways that make prediction impossible. Bringing an object forward through time would create a parachronistic incongruity. At best, the incongruity might result in increased slippage. At worst, it might make time travel impossible. Or alter the course of history. Or destroy the universe. Which is why such an incongruity is not possible, as I tried to tell Lady Schrapnell!"

"Increased slippage," Mr. Dunworthy said. "An incongruity would cause an increase in slippage?"

"Theoretically," Mr. Chiswick said. "Incongruities were one of the areas Lady Schrapnell's money was to enable us to research, research which has now gone completely by the wayside in favor of this idiotic cathedral!"

At any rate, due to this 'slippage' thing, hapless historian Ned Henry travels back to Victorian England, years before WWII, to try and correct an incongruity which could have enormous ramifications for the future.

Let me just add that involved in all this is a boat, the Thames river, an almost drowned professor, a dog, chaos theory, Victorian manners, a girl named Tossie, a seance, a sort of love story and a cat.

A time travel comedy is not something most of us might think of when thinking science fiction, but Connie Willis makes it work oh-so-very well.

P.S. I've read TO SAY NOTHING OF THE DOG three times and will probably read it yet again as time goes by. (I also have it on audio, which is tons of fun to listen to.)

Normally on Friday, author Patricia Abbott would be doing FFB hosting at her blog, Pattinase. But today Todd Mason has taken over hosting duties at his blog, Sweet Freedom, while Patti is on assignment. Don't forget to check in and see what other Forgotten or Overlooked Books other bloggers are talking about this week.