Friday Forgotten (or Overlooked) Book: ANNA, WHERE ARE YOU? (1953) by Patricia Wentworth 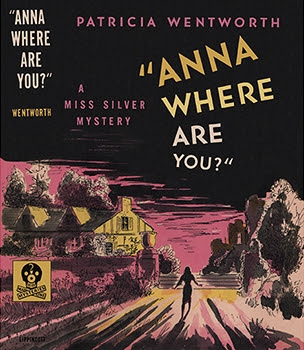 This is, for those of you unbelievers, an enjoyably compelling Miss Silver mystery - really and truly. Yes, Wentworth is a bit of an acquired taste, but in between the chaff and raff, she did create a few worthwhile (and fun) tales of suspense and even (yes!) eerie mystery. This is one of them.

In ANNA, WHERE ARE YOU? aka Death at Deep End, we have the well-worn trope: an acquaintance (the heroine's) of long-standing suddenly gone missing. I'm fond of this sort of thing. Wentworth has used it before, but never, in my view, as well as in this particular book which, actually, might make a neat little creep of a movie. (Lots of mysterious stuff taking place at night.)

Thomasina (I love that name!) Elliot is worried. Her school friend Anna Ball has suddenly stopped writing to her.

"She said she had got another job and she would write and tell me all about it when she got there. And she never wrote again. You see, I can't help worrying."

Actually, Anna Ball sounds kind of a hapless sad-sack, not the sort of young woman anyone would really want as a friend but she hasn't anyone else - so Thomasina feels she has a duty to keep in touch. Long time friend, Peter (a bit on the overbearing side and prone to pooh-poohing her fears) chides Thomasina for her efforts to find out what's happened to Anna.

“...you can’t go through life collecting lame ducks, and stray dogs, and females whom nobody loves. You are twenty-two—and how old would you be when I first patted your head in your pram? About two. So that makes it twenty years that I’ve known you. You’ve been doing it all the time, and it’s got to stop. You started with moribund wasps and squashed worms, and you went on to stray curs and half-drowned kittens. If Aunt Barbara hadn't been a saint she would have blown the roof off. She indulged you."

But Thomasina has a stubborn streak and Peter or not, she will find out what, if anything, has happened to poor Anna. First step, go to the police with her worries.

In the meantime, Miss Maud Silver, genteel lady detective, gets a visit from her long-time friend,  the ever-elegant, Scotland Yard Detective Inspector Frank Abbott. In a roundabout way, while having tea, they discuss (in general) cases of missing people.

"Do you remember a case which was in all the papers a few years ago?"

Eventually, Abbott also gets around to mentioning Thomasina Elliot's concerns about her 'missing' friend since it seems he was impressed by her eyes.

"The names are Anna Ball and Thomasina Elliot. Thomasina is the one with the eyes. Anna sounds as dull as ditchwater...School friendship. Pretty, popular girl taking up the cudgels for dreary, unpopular one. Three years' intensive post-school letter-writing on Anna's part. Generous response by Thomasina. Last letter saying Anna was going to a new job and would write when she got there. And then finish. No address. No hint of any destination. Previous jobs, nursery governess for over two years, and companion for one month. No clue as to new job. Might be anything from a housemaid to a henwife - and I rather gather she was likely to be a washout at whatever it was -"

He broke off to suddenly enquire. "Why are you looking at me like that? You can't possibly be interested. I can assure you that nothing can be duller than the whole affair."

She [Miss Silver] gave him her charming smile.

"Yet you have introduced the subject with care, and you are quite unable to let it drop."

From then on, things begin to happen as Miss Silver unofficially begins to prod. Her genteel questioning at Anna Ball's last place of employment garners information which had eluded the police and eventually, everybody involved winds up in Deep End, a community of would-be artists at whose center stands a bombed out manor house. In the house, or at least the habitable part of it, lives a chap named Peverell Craddock, a tyrant and self-obsessed pretend-writer with a family (cringing wife, odd children) who live in fear of upsetting his routine. Attached to this center, are various oddlings with artistic pretentious.

Needless to say, also lurking in the background, is a neighborhood story of an unfortunate accident (or was it murder most foul?) - the victim, a young woman who'd worked at Deep End. There are also, frustrating the local police and Scotland Yard, a series of murderous bank robberies carried off in broad daylight. How do these events link up? And what has any of this to do with Anna Ball?

Miss Silver cleverly finds her way into the center of the hive by getting a job as a mother's help to the ever-cringing and weary Mrs. Craddock at Deep End.

Lots of red herrings, lots of mysterious doings and lots of strange behavior follow. The final denouement, just when I was smugly thinking I knew everything there was to know, comes as a bit of a surprise - at least it did to me.

A nice evening's entertainment, if that's how you view this sort of book. And I do.

P.S. Here's a link to ANNA, WHERE ARE YOU? available at Project Guttenberg to download or read online - the copyright having expired in Canada.

Since this is Friday, don't forget to check in at author Patricia Abbott's blog, Pattinase to see what other forgotten or overlooked books other bloggers are talking about today.