Friday Forgotten (or Overlooked) Book: DEATH IN THE STOCKS (1935) by Georgette Heyer 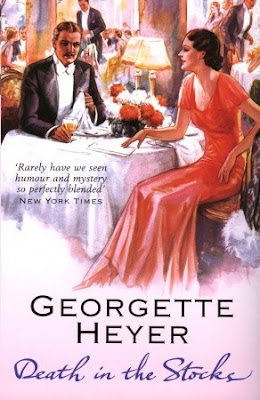 Georgette Heyer, as many of you might know, wrote a whole delightful selection of Regency and Georgian novels - mostly comedies of manners, but some heavier in weight - which are beloved by readers (myself among them) of all ages and stripes. But she also wrote a bunch of mysteries and though not considered one of the greats of that Golden Era, my feeling is that she would be if she'd written more than just a few. Though what's there is very much choice.

And with the turmoil in the world these days, Georgette Heyer makes for especially soothing reading. I've been indulging myself by listening to the audio versions of her books for days.

DEATH IN THE STOCKS (1935) is the first Inspector Hannasyde book (Hannsyde is one of two detectives featured in Heyer's mysteries - the other is Inspector Hemingway. (Heyer was apparently fond of the letter H.)

Ashleigh Green, a village outside London, is a convenient location for a snug little country retreat nicely named River Cottage. For Arnold Vereker, the unpleasant but wealthy London business man who owns it, the cottage is mainly a place for assignations of the romantic variety. However, on one moonlit night, Vereker's body is found by the local bobby while out on his rounds. Attired in evening clothes, the corpse is slumped over, knife in back, feet tucked in the wooden stocks on the village green. 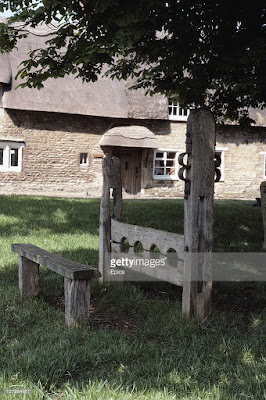 Stocks, an early system of public shaming, for those of you who may not know exactly what Heyer meant.

Called in on the case, Scotland Yard Detective-Superintendent Hannasyde finds himself immediately bombarded by a one too obvious suspect, Antonia (Tony) Vereker, the dead man's younger half-sister. Motive? Well, she was engaged to a a rather oily Vereker employee, Rudolph Mesurier, whom Vereker disliked intensely. Tony's brother controlled the purse strings and would not countenance a marriage - no more need be said. Except that Tony was on the scene on the night of the murder - had sprung an impromptu visit on her surly brother and having found the cottage empty, had decided to crash.

When the cops show up on the doorstep in the middle of the night, Tony immediately clams up (but not before making a general nuisance of herself) then calls her cousin Giles Carrington, who happens to be a lawyer.

The Verekers are a highly eccentric family, the sorts of people for whom telling the truth is an absolute social faux pas. Tony's brother Kenneth, now the presumptive heir, is an artist who seems to luxuriate in 'struggling' at his Chelsea flat. It's no big mystery that he welcomes his inheritance especially since he is lately engaged to a flighty young woman with acquisitive tendencies. Violet Williams is a beautiful fashion designer (or illustrator, can't remember which) who is not too eager to 'struggle' any more than she can help. Tony can't stand her. Neither can the less beautiful Leslie Rivers who has nursed a hopeless passion for Kenneth since they were youngsters.

Kenneth and Tony delight is making themselves unpleasant to the police, obfuscating the truth and behaving as if murder were not as big a deal as the cops make it. After all they have the mantle of  'bright young things' to wear about London.

It is enough to make cousin Giles quietly want to tear out his hair.

The Vereker siblings can do that to you. Doesn't Kenneth realize that the cops are fashioning a hangman's noose for his tender neck? Sure he does, but he has a persona to maintain. As Nero Wolfe is fond of saying (and I paraphrase): Eccentricity only works as true eccentricity if it is maintained come hell or high water.

That is, until long lost Roger Vereker, older half-brother to Tony and Kenneth, decides to come back from the dead. Complications ensue (including a second body) since Roger is now the presumptive heir to the Vereker fortune.

Someone may have committed murder for nothing.

While it is true, as many online comments attest, that there is no one in this book to cozy up to and/or especially cheer for (except maybe Leslie Rivers who does not have a major role), I still enjoyed (maybe because at my age, my eye is too terribly jaded) this whodunit enormously. Even if at some points in the proceedings, I wanted to strangle Tony and/or Kenneth and even, occasionally, the elegant Giles whom we immediately suspect rather dotes on Tony. Truth be known, I kind of liked Giles, he is just the kind of hubby Tony needs. But as usual, I get ahead of myself. First there is Rudolph to get rid of.

The killer comes as a surprise (though some of you may figure it out long before, I didn't, until nearly the end) and is, of all things, the least likely among the small cast. Money is a great motivator for deadly doings as we all know.

Author Patricia Abbott is traveling today so she's handed FFB duties over Todd Mason at his blog, Sweet Freedom. Don't forget to check in to see what other forgotten or overlooked books other bloggers are talking about today.