Friday Forgotten (or Overlooked) Book: THE HOUSE OF THE FOUR WINDS (1935) by John Buchan 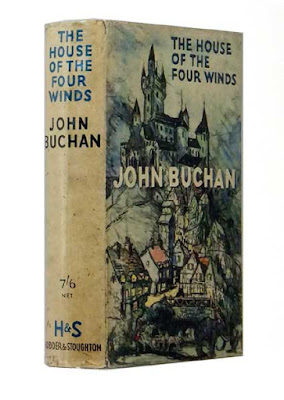 Sorry guys, I can't be reasonable about these books - when it comes to John Buchan, you could say that I'm close to becoming unhinged (but in a good way). Can't help it. I haven't read all he's written, but the books I have read I've loved and taken to my heart, they are books I will continue to reread as long as I live. You see, I love well-written (if improbable) adventures of long ago  - stories that recall a different world where codes of honor and good manners mattered. A world where people still dressed for dinner and occasionally read poetry. (It also doesn't hurt that I've been an anglophile since my teens.)

Before I forget, here's my review, from last year of HUNTINGTOWER just in case you missed it. It's the first book in the Duncan McCunn trilogy.

The three books (HUNTINGTOWER, CASTLE GAY and THE HOUSE OF THE FOUR WINDS) should be read in order so that the recurrence of certain characters (and their personalities and quirks) will have that much more meaning. But it's not the end of the world if you don't. Stay flexible - that's my motto. Though THE HOUSE OF FOUR WINDS is actually the sequel to CASTLE GAY.

Most of you are probably familiar with John Buchan from having seen Hitchcock's early classic THE 39 STEPS based on the first Richard Hannay book. Though the film script made many changes from the novel (there is no woman romantic interest in the book, for example) it has its own delightfully shadowy allure even to this day. The book is rather different, but it also has its own allure. I've read it twice and will read it again along with GREENMANTLE and MR. STANDFAST. Terrific stuff.

These are the sorts of books you either have an inclination for or you don't. The kinds of books I loved as a kid (books I could disappear into) and still love as an old lady. They are definitely of their time, but I don't find that a hindrance at all. If you enjoyed THE SCARLET PIMPERNEL by Bareness Orczy and THE PRISONER OF ZENDA by Anthony Hope and/or the books of Rafael Sabatini, for instance, then you will probably enjoy John Buchan's stories.

The McCunn books were a late find for me (I had only been familiar with Buchan's Richard Hannay books the last couple of years). And now I am incorrigible about recommending them to anyone who likes a good rip-roaring yarn full of adventure and derring-do, books where the good guys win and the bad guys don't. My kind of books. I mean, sometimes you do need a break from the grimness of everyday life.

Duncan McCunn is a retired grocer (with a romantic heart) and the endearing Scottish hero of HUNTINGTOWER, the first book in this trilogy. He jumps into the fray once again, years later when adventure comes calling in the very enjoyable CASTLE GAY, the second in the trilogy. But to my mind, THE HOUSE OF FOUR WINDS stands up even better to HUNTINGTOWER (which I consider to be 'brilliant') and makes for a perfect third installment.

It's years since Duncan McCunn and the Gorbal Diehards (Glaswegian slum boys without whom a princess would not have been saved and a dangerous villain routed) had an unexpectedly splendid adventure in the Scottish Highlands. After which, impressed by their devotion and intelligence, McCunn had taken two of the boys, Wee Jaikie and Dougal(Chief of the Diehards) into his home and raised them as surrogate sons. They are now young men off to make their way in the world.

All are traveling over the summer holidays to Europe from Scotland. Each on his own, but they will meet up at various places on the Continent which of course, accommodates the adventure nicely. Several characters from the second book, CASTLE GAY, will also be along to help as well as a menacing leftover bad guy in need of a strong rebuke.

Duncan McCunn who is feeling elderly aches and pains will be traveling for his health, Jaikie is on a walking tour and Dougal is on assignment for his newspaper.

It is 1935 and two pugnacious factions are gearing up to overthrow the corrupt rulers of the tiny country of Evallonia. The monarchists form one group and 'Juventus', a well-regulated rebellious youth movement (sort of like the brown shirts in Germany, but nicer) form the other. They see the monarchy in the person of Prince John (the rightful King of Evallonia) as nothing more than a puppet leader and not to be trusted. Needless to say, there are some very nasty villains trying to make sure that neither of these groups succeeds in their aims, setting them against each other and generally stirring the pot.

To prevent a blood bath and place good Prince John on the throne will take all the amateur skill and ingenuity first evinced in HUNTINGTOWER by McCunn and his 'diehards' not to mention the skill and heroics of friends met along the way - the novel is told from several points of view and doesn't suffer in the least from this since John Buchan handles it all skillfully. The last third of the novel is as exciting as just about anything I can remember reading. (Which isn't saying a lot because my memory is not what it once was, but you get my drift.) The beginning is rather slowish and a bit meandering, but stay with it. I did. It soon picks up speed and you'll be off on a grand adventure. Hold on to your hats - because there will even be a Prince in disguise!

Needless to say, there are plot machinations galore and a bit of a love story (involving darling Jaikie whom we've come to have great affection for over the three books) as all the links are finally woven together in an expert way - though I might add that the story-line does require that you pay attention. It's all in the mind-set, you know. If you're in tune, you'll love all this as much as I did. If you're not, you won't.

What can I say? I'm not sensible about any of this.

And since it is Friday, we usually check the FFB links at Patricia Abbott's blog, but this week Todd Mason is doing hosting duties later on today at Sweet Freedom.