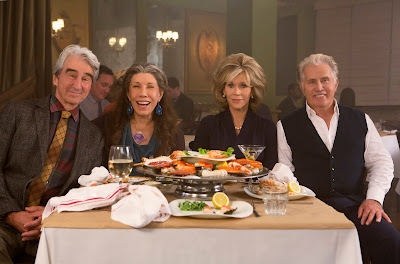 And don't get me started on what passes for entertainment these days.

At any rate, I lately didn't have to bother much about that since I haven't had a TV or the services of cable in several years. But the funny thing that happened is/was that I didn't miss any of it. People missed it for me, but I didn't. I had my computer (a desk top PC) because - call me crazy - I just don't like watching ANYTHING on a screen smaller than your basic desk top. But as time went by I realized I didn't like to sit at my desk and watch movies. I would get impatient and fast forward or just stop the movie and go watch a baseball game. Very little held my interest online except for, maybe, baseball and occasionally, football.

But shows and movies - not so much.

Anyway, this is my long-winded way of getting to the point of this post.

I've signed up again (for the second or maybe, third time) with Netflix since 'streaming' seems to me to be not as 'silly' as some other things I could mention. Plus I guess I got tired of everyone else raving about shows that I never got to see or films I never got to watch. (The films are still an on-going project. Don't know if I'll EVER get used to watching them online. It is possible that at my age, I just don't have the patience to sit still for two hours and watch anything, but we'll see.)

But turns out I do enjoy watching (some) shows. And I suppose I have a lot of catching up to do if I want to be 'part of the conversation' as Frankie says, on my new favorite show, GRACE AND FRANKIE.

Yes, I'm hooked on GRACE AND FRANKIE after watching about five episodes or so.

Jane Fonda, Lily Tomlin, Martin Sheen (whom I adore), and Sam Waterston. I mean, what's not to like?

In case you're not familiar with the basic plot, here it is:

Robert Hanson (Martin Sheen) and Grace Hanson (Jane Fonda) live in San Diego. They have been married for forty years.

Hanson's law partner is Sol Bergstein (Sam Waterston), he and his wife Frankie Bergstein also live in San Diego and have also been married for forty years. 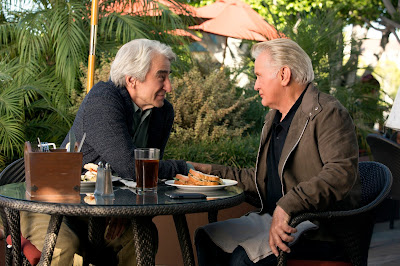 This comes out of the blue for the women, not to mention their grown children who have their own (and less fascinating) problems to deal with. At any rate, it all sounds preposterous, but Sheen and Waterston make it work - their scenes together have warmth and affection reined in a bit by healthy doses of guilt.

I very much like Jane Fonda and Lily Tomlin (both are producers of the show) in these 'odd couple' roles. Tomlin plays Frankie as an eccentric ex-hippie mom with two adopted sons (one black, one white) very believably. She is funny but also poignant and goofy and strangely likable. Jane Fonda plays Grace as a bitter, brittle, fashionable and rather typical (I think) California type. (She hasn't had ice cream in fifteen years.) She is less likable, but grows on you as the show progresses. Dealing with their new lives and slowly becoming friends, Grace and Frankie come to realize that in society's eyes, they've become extraneous. They are 'invisible women'.

As happens so often when marriages break up, Grace has lately been dumped by her supposed 'best friend' of many years - at a funeral, no less. She and Frankie need each other and luckily, they have an ocean beach house (which belongs to both couples) to share. (Hey, none of this would be fun if they were poor.)

Events happen at a rather rapid pace since this is a television show and things have to be kept moving I suppose, but so far I've enjoyed what I've watched (and it's possible that the act of streaming unintentionally increases the apparent pace of what happens in the shows).

I like the addition of Craig T. Nelson lately to the cast and am hoping that Ernie Hudson has not been written off.

Yeah, it's gimmicky, but you know Martin Sheen can make just about anything work. He is one of the last of the old time actors working today who has undeniable 'presence' (not to mention acting brilliance) and that counts for a lot.

So yes I guess I'm hooked on GRACE AND FRANKIE. At least, for now.