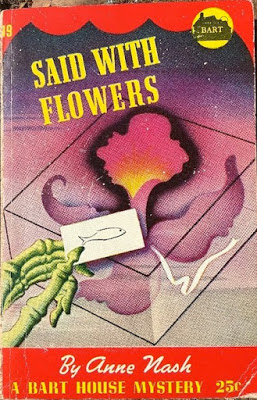 My blogging friend and fellow vintage book zealot, John Norris, wrote about Anne Nash's SAID WITH FLOWERS just a little while ago (May 27th, to be exact - here's the link) So why am I daring to write about it just these few weeks later? Well, because, his [John's] are recommendations I always pay attention to and I found the book easily online and ordered it immediately. (Not always the case with the rarities that John likes to tease us with.) And I thought it might be fun to compare each other's reviews while still fresh in mind - well, at least in my mind. And I was warned that other Anne Nash books are almost impossible to find so this is probably it.

John is the expert when it comes to flushing out details about author's lives and publisher's imprints and the like, it all seems to come naturally and easily to him. I, on the other hand, have a much harder row to hoe. So for those details, see John.

I really enjoyed this book. (Well, I kind of knew I would.) In fact, I gave it four stars - must remember to add this to my Christmas murder cozy list too since it fits that category so very nicely. I also like that this is the sort of vintage book which quaintly names the characters up front. I wish mysteries still did that.

Though this was Anne Nash's debut, I liked the author's comfortable ease with this tale of two women who own a flower shop out California way and how they become intimately involved in the horrendous murder of a friend. Well, not in the actual murder itself, but practically right on the scene and the first to see the body. Yes, as John points out in his review, there's a touch of the 'had I but known' school of mystery writing, ala Mignon Eberhart or, for that matter, Mary Roberts Rinehart. But only a touch or two.

Doris Trent (called Dodo) and Nell Witter are two nice women of a certain age who live together (but are not a lesbian couple far as I can tell - at least the author doesn't make much of their cozy living arrangement) and together run a shop which is called, very aptly, The Flower Shop. (Or maybe I missed the actual name somewhere along the line.) At any rate, it is just a couple of weeks before Christmas and business is booming. Who knew that florists did this much frenzied business? It seems that plant and flower buying patrons throng the small shop all hours of the day and night. Never a dull moment for Dodo and Nell.

But misfortune has dealt them a blow; their regular jack of all trades and delivery man, Patrick, suffers a broken leg while on the job (slipped on some leaves in the backroom - is there a lawsuit in the offing?) and is suddenly not available to carry out his Christmas duties. Well, as luck would have it, in steps a charming young man named Barney Miller who is not the star of a cop comedy series from back in the day, but a stranger new in town and providentially on the outlook for a job. It also happens that he knows a thing or two about plants and flowers so almost immediately he becomes the answer to a flower shop proprietor's prayer.

However, it's not all roses and baby's breath, these are dark times. It just so happens that a serial killer called Karp the Killer (yeah, I had to laugh) is on the loose and wreaking havoc around the country. This guy travels. And he leaves a calling card of a fish (not a real fish, a drawing of one) at each of his murders - hence, the moniker given him by the press.

Is Barney aka Karp the Killer? Lots of hinting going on as Dodo (especially) begins to suspect that there is more to their savior than meets the eye. Especially when Rosalind Vance, a close friend, is found murdered in the alley behind the shop - a pruning knife stuck in her chest and a calling card nearby.

The cops and the press converge on the small coastal town on the hunt for news and clues about Karp whose wretched excesses have captured the imagination of the entire country.

Into the mix comes a solo (and rather accommodating) cop named Mark Tudor along with his canine partner, the highly trained German Shepherd, Svea. In the long run, it is Svea who will save the day, but I'm not telling you anything you won't have suspected almost immediately.

But was Rosalind Vance - a woman older than Karp's regular targets - an actual victim of the serial killer? More and more it begins to look like a copy cat affair as Tudor starts hunting closer to home for a killer. Dodo and Nell think otherwise but it turns out that Rosalind Vance's home life was not as benign as might have first appeared. Unbeknownst to the town and to close friends who took her to be a happily married lady blessed with a devoted husband and beautiful (but spoiled) daughter Sheila, there was a cauldron of frayed emotions bubbling beneath the calm surface. The things we don't know about our neighbors private lives would fill a book. And here it does.

Adding to the confusion, it seems that charming Barney has been sneaking off to meet a woman in between making his nightly flower deliveries. This guy is a fast operator.

And again I ask, who knew that flowers and plants were so high up on the Christmas 'must have' list? Why, the shop even makes Christmas day deliveries! Well, this was 1943, things were different then. Women wore corsages.

Yes, there are lots of anachronisms running rampant throughout the story - but that never bothers me if I'm engaged - and some of them I find rather endearing. SAID WITH FLOWERS engaged me even as it seemed set in a different world, in a different century (well, that is true enough) and filled with the sorts of people that populated B-movies (and later, early television) of the time.

Though in the end, the real reason for Barney's appearance in town and on the spot seems loosely conceived to me, I still enjoyed the book and recommend it highly to those of you who like this sort of thing. Plus, don't forget, there's a dog.

Since it's Friday, don't forget to look in on author Patricia Abbott's blog, Pattinase, to see what other forgotten or overlooked books other bloggers are talking about today.