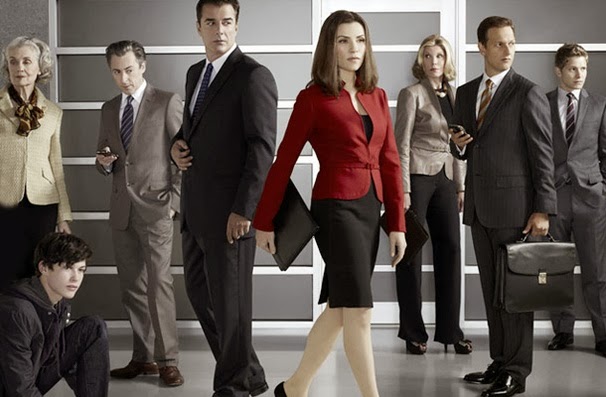 After self-indulging in a multi-episode bacchanalia of the television series, ELEMENTARY and PERSON OF INTEREST, I naturally thought I'd have nothing left to watch (television-wise) until the next seasons of said series make their appearance on Netflix. (And don't think I'm not anxiously awaiting same.)

But just to see what's what, I decided to take a peak at THE GOOD WIFE since everyone praises the show to the skies and and back and what the heck.

Well, just so you know sometimes 'everyone'  is right. It's a terrific show. Nah, more than terrific - it's FABULOUS! Well-plotted, well-acted and well, just amazingly good television for those not really expecting any true-to-reality lawyerly shenanigans - just true-to fictional-life lawyerly shenanigans. Seen through a jaundiced eye, THE GOOD WIFE makes for a sometimes humorous, sometimes serious, sometimes moving, occasionally mind-bogglingly duplicitous fun time. Yeah, I like it a lot. And I'm not a big fan of lawyer fiction. So go figure.

I've always liked Julianna Margulies and I especially like her in this powerhouse part seemingly tailor-made. As Alicia Florrick (love that name!), once a betrayed housewife and currently on the partner fast track at the well-known Chicago law firm of Gardner/Lockhart, she manages somehow to be both sympathetic, feminine, clever and hard-nosed, all at the same time. Not bad for a lawyer who'd taken thirteen years off to raise her family.

And wow! the casting gods didn't stop there. JM is surrounded and supported by a very talented cast of all-pros. My favorite being Alan Cumming minus his Scottish accent and sporting a nice American drawl. I simply adore him as Eli Gold, a political fixer/lawyer/conniver who manages to make you like him no matter what skullduggery (though he has mellowed out a bit in recent times) he happens to be up to. I'm hoping for a nice romance in Season 5 between Eli and Natalie Flores. She is played by America Ferrara (who, by the way, is simply wonderful)  - another bit of offbeat casting which works beautifully.

My third favorite cast member is Josh Charles as Will Gardner who, I understand, has gone from pining ex-lover, current lover, ex-lover, boss, ex-boss of Alicia Florrick. Haven't seen Season 5 yet, but I know that major fireworks have occurred. Here is a man who is not classically handsome, but yet manages to be sexy as all heck. A flawed character who earns our sympathy and then, maybe, squanders it. We'll see.

I also love Matt Czuchry as Cary Agos, once Alicia's rival at Gardner/Lockhart, now Deputy State's Attorney. This is an actor I've not been familiar with at all, but boy does he have a way about him. I've been really impressed by his easy on-screen manner, the way he has of observing. Attitude-wise he reminds me very much of Nick Carraway, the narrator of Fitzgerald's 'The Great Gatsby'.

Let's not forget the always fabulous and appealing Christine Baranski as wheeler/dealer Diane Lockhart, Will's partner and cohort. She is everything one would imagine a powerhouse lawyer to be and more.

Archie Panjabi as the mysterious Gardner/Lockhart investigator/enforcer Kalinda Sharma is intriguing in a part that seems to fit her like those skin-tight knee-high boots she wears. This is another actor I was not familiar with at all. I am very impressed by how she handles a part that could easily have been unlikable and even bizarre. When she takes a baseball bat and smashes in the windows of a smarmy co-worker's SUV, you know this kick-ass babe means business and you like her for it.

I'm not a big fan of Chris Noth, but he is, admittedly, quite good as Peter Florrick, Alicia's once disgraced, slightly sleazy husband and current Chicago State's Attorney. How he went from one to the other is a story not so hard to believe in today's America.

Oh, and speaking of sleazy, I almost forgot the odiously likable Zach Grenier as David Lee, a Gardner/Lockhart equity partner and family law expert. I always look forward to his scenes and always expect something over-the-top and delightfully dreadful.

I've got four episodes of Season 3 set aside for tonight and I've got Season 4 lined up and ready. Whoopee!