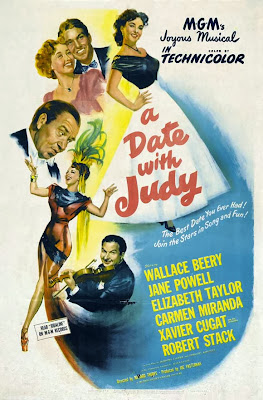 It's that time of year again, well, almost. Valentine's Day is just a few weeks away so I'm going to concentrate on romance for the next few weeks on Tuesday's Overlooked (or Forgotten) Film posts. 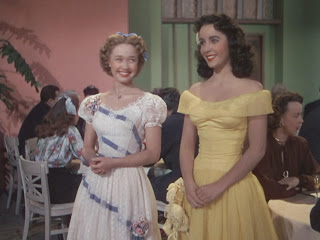 A DATE WITH JUDY (1948) is a film directed by Richard Thorpe, written by Dorothy Cooper, Dorothy Kingsley and Aleen Lesley based on a popular radio program begun in 1941. The film stars Jane Powell, Wallace Beery and a very young and startlingly beautiful 16 year old Elizabeth Taylor. (In fact, she is so beautiful she almost looks other-worldly. An exotic bloom tucked in among more plebeian blossoms.)

The setting is a make-believe Santa Barbara, California where most of the town's kids hang out at Pops Pharmacy, drinking malts and gossiping about their romantic entanglements. The sort of place where the 'soda-jerk' wears a uniform (with cap) and Pop is usually around to dispense advice. It's a way of life long gone, but looked back on by most of us with affectionate if hazy nostalgia. 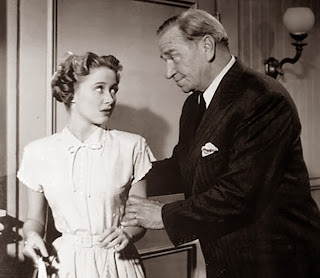 Judy Foster is a vivacious 16 year old miss on the borderline of woman-hood, but still hanging onto her coltish kiddy-ness. She is adorably played by Jane Powell. Her dad, Melvin Foster, is played, incongruously enough, by Wallace Beery, an Oscar winning actor who made a career of curmudgeonly old codgers (mostly in black and white dramas), often with hearts of gold.

Here he's called upon to dance the rhumba and play a devoted family man and hubby to Mrs. Foster (Selena Royle, a very attractive lady of a certain age) in bright Technicolor. And guess what, he pulls it off. Beery is entirely believable and even, dare I say it, a little bit sexy. In fact, he and Carmen Miranda steal the picture from the kiddies. But I'm getting ahead of myself as usual.

Judy Foster lives within the comfortable bosom of a close-knit American family: Mom and dad and pesky little brother Randolph (who wears one of those cut felt 'Jug-head' beanies you might have spotted at a flea market) plus a sweet old grandfather (George Cleveland) known as Gramps. As usual with most of the adults pictured at this time, they all look too old to be who they are (except for maybe, Gramps), but why quibble. It was the style of the time. 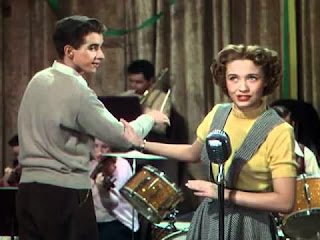 Judy has a beautiful singing voice as we are immediately made aware of when from the beginning she's shown rehearsing for the dance at the high school. Her boyfriend Oogie (Ogden) Pringle (Scotty Beckett) is the band's arranger and conductor. His father, the richest man in town (or one of the richest) owns, among other things, the local radio station and is president of the bank. He and his sister Carol (Elizabeth Taylor) are two lonely but self-sufficient rich kids being brought up in a huge house by the family's butler since the father is mostly absent, concerned with his various businesses. The mother is long-gone.

The Pringles live in a big house. The Fosters live in a smaller one. You are meant to prefer the smaller one which is snug and warm and charming. Mr. Foster owns a successful local fish cannery business but it's been years since he was actually out at sea. They have a maid named Nightingale who sings, 'Swing low, sweet chariot...' as she's serving dinner. The Fosters are a very affectionate and loving family.

The Pringles are otherwise, though sister and brother, Carol and Oogie, seem close. However, midway through the film, the all too busy father (Leon Ames) will see the light and return to the bosom of his startled family. 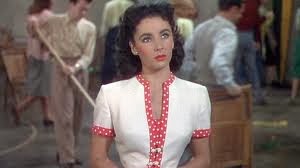 Judy and Carol are best friends, though Carol is meant to be older - she looks 18 or so in the film. Judy relies on Carol's well-meant (and often wrong) advice, especially when it comes to men. 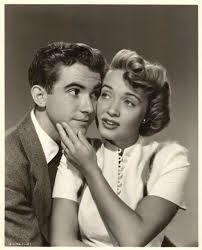 Judy and Oogie have a volatile relationship apparently based on Judy's emotional ups and downs. (You remember what is was like to be 16 - don't you?) Poor befuddled Oogie walks around in a daze, completely at sea when it comes to 'women' - one almost feels sorry for him - he is prone to bad advice from his sister as well. The course of true love n'er did run smoothly as we all know. 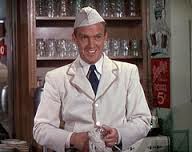 Anyway, into the mix comes the new man in town, Stephen I. Andrews  (Robert Stack - totally too old for the part) playing the new 'soda-jerk' at Pop's (who happens to be his grandfather or uncle or whatnot) - we later learn that the guy is working his way through medical school. Stack looks like an undercover cop more than anything else, he just couldn't help himself, even back then. 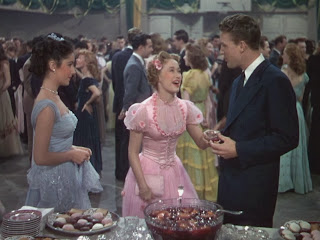 But Judy takes one look at his rugged physique and decides she's in love. As a favor to Pop, Stephen takes Judy to the big dance since Oogie failed to pick her up on Carol's bad advice. At the dance, Carol takes one look at Stephen and he at 'the prettiest girl in town' (you think?) - and all bets are off.

In the meantime, the Foster's wedding anniversary is coming up - the 20th (though it seems to me it would have been more appropriate to make it the 30th) - and a big celebration is planned at a local club with Xavier Cugat and his orchestra. Mr. Foster wants to surprise Mrs. Foster by learning to rhumba for the big bash. To that end, Foster hires Miss Rosita (Carmen Miranda), Cugat's fiancee and principle singer and dancer, to teach him the dance.

Miss Rosita shows up at he fish canning office every afternoon to instruct Mr. Foster (hilariously) in the terpsichorean art of the rhumba, wiggly hips and all. Those scenes are a hoot. Beery looks like a giant bear attempting to dance. 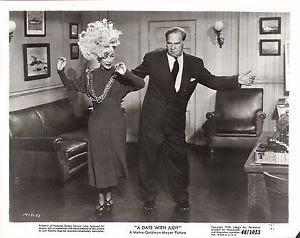 Mr. Foster tries to keep his secret by stuffing Miss Rosita in a closet so that Judy, paying an impromptu visit to the office, won't see her and guess what he's up to. Uh-oh. 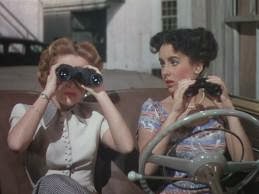 Unfortunately, Judy soon suspects that her father is involved in some hanky-panky. She consults Carol, the all-wise and all-knowing. Carol gives her bogus advice. Judy is devastated. The two girls decide to wait until after the big anniversary bash to break the news to the unsuspecting Mrs. Foster.

In the end, Mr. and Mrs. Foster dance up a storm (adorably), doing the rhumba at their Anniversary bash and all is made clear, all is forgiven and Carmen Miranda gets to slink and sing 'Cuanto le gusta, le gusta, le gusta...!' with Cugat at the helm of the orchestra. 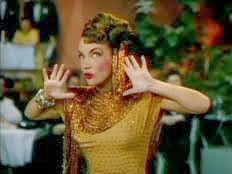 The one and only Carmen Miranda.


A DATE WITH JUDY is a charming movie heavily laced with pleasant nostalgia in which the unlikely pairing of Wallace Beery and Carmen Miranda upstages everyone else. Well, Carmen usually upstaged anyone who appeared in scenes with her anyway. She was a human dynamo on platform heels, a very vivid and likable screen presence. I, for one, adore her. Being a Latina myself, I never took umbrage at her shtick. Instead I appreciated her gusto and talent. She shakes up what would otherwise be a rather sleepy sort of movie musical full of pleasant songs and pleasant if not memorable (except for Liz) small town folk.

Being it's Tuesday, don't forget to check in at Todd Mason's blog, Sweet Freedom, to see what other films and/or audio visuals, other bloggers are talking about today.


An aside: of all the main actors in the film, Jane Powell has proven the most long-lived and is still with us at the age of 84. Charmingly so.
Posted by Yvette at 12:00 AM