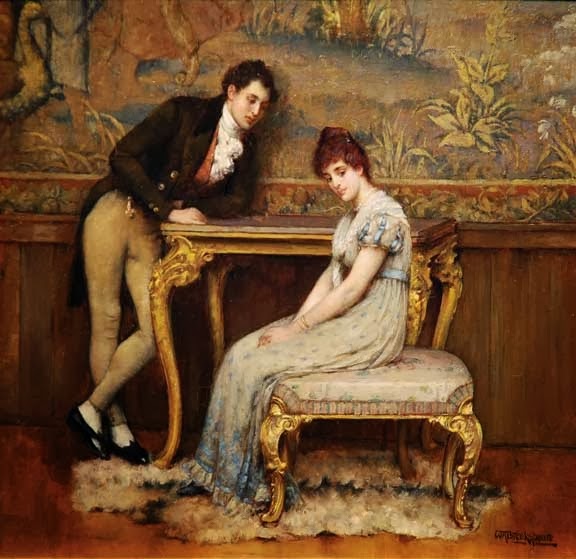 I'm doing a bit of re-reading lately, mostly Georgette Heyer - it's the mood I'm in. For those of you not familiar with Heyer's work, Wikipedia is generously informative re: Heyer's biography and bibliography.

A new year benefits when begun with Heyer. (Words to live by.)

The author's expertly researched Regency Romances as well as the couple of Georgian Romances I've read are - dare I say it? - enchanting. Well, why not? Heyer invented the genre. Best of all, her sense of humor coupled with the occasional absurdity always make me laugh out loud. (I love a book that doesn't purport to make me laugh out loud but does so anyway.) Heyer's occasional use of Regency slang takes getting used to, but hey, it's not rocket science - plus it's loads of fun.

The wicked delight Heyer takes in her characters and their lives is totally evident in her best books and transfers itself to the reader immediately. Her affection for the often endearing secondary characters is also obvious from the first. No one can write a better Regency fop or a lack-wit gudgeon or a brainless twit (but always with affection), better than Heyer.

This era in British history lends itself to romantic imaginings probably because of Jane Austen. Of course the reality was somewhat different and mostly rather grim, but while reading Heyer's Regencies you can make believe that happily ever after really existed once upon a time.

I also enjoy Heyer's less well-known 'contemporary' detective fiction which, to my mind, rivals some of the best of Golden Era. I haven't, yet, read any of her more serious historical work so can't say anything about those. But I've heard very good things about AN INFAMOUS ARMY which is said to contain one of the best accounts of the Battle of Waterloo found in fiction.

The following is a list of my favorite Georgette Heyer Regency and Georgian books. Where I've reviewed the book, a link is included.