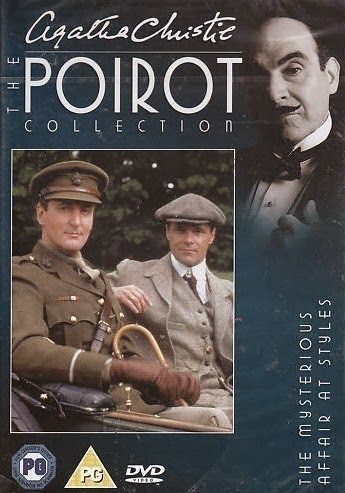 THE MYSTERIOUS AFFAIR AT STYLES was not only the first book featuring Hercule Poirot, it was the first book written by the young Mrs. Christie who, I understand, wrote it in a response to a challenge from someone in her family. According to Wikipedia, the actual writing was done during WWI, but the publication came later - 1920 or so.

I'd recently bought the audio version (which was a steal on audio.com) narrated by the wonderful Hugh Fraser and after listening to it, decided to re-watch the 'film' (actually 103 minutes made for television - Season 3, Episode 1 of Agatha Christie: Hercule Poirot which originally aired on PBS) once again, having nothing but happy memories of it.

THE MYSTERIOUS AFFAIR AT STYLES (1990) was directed by Ross Devenish and 'dramatized' cleverly (perhaps lovingly) by Clive Exton from the novel. Take note that the storyline follows almost completely the original created by Christie (miracle of miracles), no 'improvements' or additional nonsense added except for some scenes early on of Hastings (Hugh Fraser) recovering from shell shock after enduring trench warfare in France. This is implied in the novel but I think the additional footage in the film works very well in establishing who Hastings is and leads very nicely into the story.

I might almost say that this is a lavish production, but let's tone it down to just plain gorgeous and take it from there. The production team of designer Rob Harris, art director Peter Wenham and cinematographer Vernon Layton does a splendid job show-casing the unspoiled English countryside at its loveliest and greenest. While the guns of war are still firing and men are dying across the channel, England seems a kind of lyrical haven for those on leave, left behind or recuperating.

Not only is Hastings' (I adore Hugh Fraser) melancholy 'stiff upper lip' attitude charming, but so is life in a small English village, full of the sorts of things and the kinds of people we all go to Christie for. Add, this time around, a group of Belgian refugees for some exotic flavor and we're all set. Some of the beautifully bucolic scenes might almost be paintings, set up as they are to illustrate a time long gone.

The contrast with the mostly unlikable (as they are in the novel) cast of characters at the heart of the story couldn't be greater as the gentle Hastings meets up with an old friend, John Cavendish (David Rintoul), and is invited to stop at the family home, Styles Court, for continued rest and relaxation.

The rather stiff-necked Cavendish is in a snit (I don't quite understand why he isn't at the front - even if it is explained in passing, I gather he's doing some sort of home-front work) because his elderly mother has married a man twenty years younger than herself - Alfred Inglethorpe (Michael Cronin) - a man whom the rest of the family considers an unprincipled bounder. Well, he wears a bushy black beard and dresses in totally inappropriate funereally dark clothing - what more is there to say? Obviously the man is beyond the pale.

What's worse: Not only is the foolish Mrs. Inglethorpe (Gillian Barge) besotted by her obsequiously doting hubby, she has changed her will so that Alfred will inherit everything except Styles Court and the house in London. John Cavendish gets those, but none of the money. Uh-oh.

John has never really worked, you see - not actual work. Neither has his younger brother Lawrence (Anthony Calf) who has studied medicine but would rather be a poet or writer or something - though he is currently helping out at the local hospital. Both men would benefit from some hard labor far as I can see, but these are the landed gentry of the time and I suppose that was the way of it - the mother rules the roost and controls the money and the sons go along with it. Naturally that leads to resentment and murder. At least in Agatha Christie's world.

Working at the hospital dispensary is another member of the household, young and lovely Cynthia Murdoch (Allie Byrne) who is a kind of protege of Emily Inglethorpe's, an orphan taken in - that sort of thing. Rounding out the inhabitants of Styles Court are John Cavendish's jealously inclined wife Mary (Beatie Edney) who suspects him of hanky-panky with a saucy local widow, and Evie Howard (Joanna McCallum) a general all purpose factotum (tweeds and stout walking shoes) who is not only a long-time friend of Mrs. Inglethorpe's but has her own various duties around the house all the while making sure everyone knows how much she detests the new hubby.

Hastings is bowled over by the beauty of Styles Court as he is soon partaking of all the family's rituals, afternoon tea, tennis, riding (the few horses not commandeered by the army), etc. But he can't help notice the change in his old friend, the tension hanging over the family; there is evil lurking within the bosom of the Cavendish clan. The only problem for us is that these people are just not very likable - as I've mentioned - so that when the old lady is killed - as we know she will be - there's not much sentiment for the family or, for that matter, for us, to feel. These are not people one can cozy up to.

But never mind, once Hercule Poirot (David Suchet) enters the picture - he unexpectedly meets up with his old friend Hastings (they knew each other in Belgium) at a local village tobacco shop - the entire demeanor, the feel of the movie changes. David Suchet has such warmth and charm and is such a likable presence that nothing much else is needed.

Poirot is a refugee, fleeing from his Belgian homeland and the scene in which he and Hastings reconnect is just delightful - 'Mon ami, mon ami!' It always makes me misty to see the affection these two men have for each other. Of course, one can immediately cozy up to them - and later to Inspector Japp (Philip Jackson) - and leave the rest of the characters to fend for themselves. Poirot makes everything fine and dandy.

Once the indefatigable Belgian is on the job, the murderer of Emily Inglethorpe aka Emily Cavendish is as good as done for. But of course it has to be the correct murderer. I mean, everyone knows the husband did it - right? Needless to say, when the wrong person is arrested and tried, it's up to Poirot to straighten everything out. Which of course he does, rounding up all the suspects in one room where, to the consternation and general amazement of all, he then patiently explains what really happened.

This is one of the best adaptations of Chrisite and if you've somehow managed to miss it, then head on over to Netflix where the entire first (and best) seasons (1989 - 1995) of Poirot are currently available for streaming.

Don't forget to check in at Todd Mason's blog, Sweet Freedom, to see what other Forgotten and/or Overlooked Films (and other A/V material) other bloggers are talking about today. As usual, it's an eclectic list.