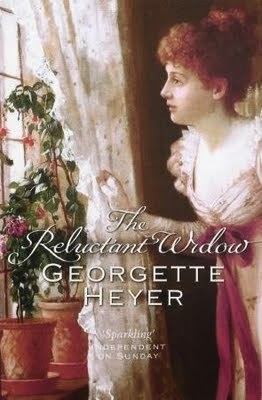 This book by Georgette Heyer has the most preposterous 'hook' - as preposterous as a writer gifted at creating preposterous notions has ever conceived. THE RELUCTANT WIDOW is a Regency romance/spy thriller/mystery caper combination which has plenty of the well known Heyer mischief as well as a raised eyebrow or two. It's the delightful plot here that works wonders, though the characters have their own inevitable share of Heyer charm.

Here's the hook: A youngish, impecunious gentlewoman having no alternative but to accept a position as governess on a distant country estate where she will, no doubt, be bullied about and her life made miserable, suddenly finds herself confronted by an outrageous alternative. Eleanor Rochdale, daughter of a destitute and dead gentleman who's squandered the family's inheritance is traveling to reach her new employer when due to a mix-up at a Sussex village coach stop, she makes an assumption, steps into a waiting carriage and is taken instead to the wrong destination.

At this wrong destination, where apparently someone like her had been expected but for an entirely different reason, Eleanor is soon caught up in an implausible plot: she will be asked to marry a man she's never met and doesn't have to live with - a business arrangement to her benefit. Originally mistaken for the woman Edward Carlyon had hired to marry his dissolute younger cousin Eustace Cheviot (in order to avoid inheriting Cheviot's estate himself - all is explained as you go along), Eleanor balks at the preposterous plot and demands to be returned to the coach stop. However Carlyon rightly points out that it's much too late for a would-be governess to arrive anywhere. They'll have to wait until morning.

Within minutes, however, Carlyon's younger brother Nicky arrives unexpectedly. He has been sent down from school for the term, the result of an impromptu escapade involving a dancing bear. But that isn't the worst of it, he blurts out that he's killed Eustace Cheviot in a fight at a public house. It seems Cheviot had insulted Carlyon and then pulled a knife (there is a witness) when Nicky tried to defend the family name. Cheviot is still alive but will not last the night.

The perfect time for a wedding.

Carlyon apologizes to Eleanor for recent events and for the mistaken identity but needs must. He is not the sort of man to take no for an answer especially when time is running out and the wretched Cheviot is at death's door.

I ask you:  Rather than become a meek governess skulking in the shadows, prey to any employer's whim or roving eye - wouldn't you rather inherit an estate which even if run down at the seams, is still worth a goodly amount, becoming thereby a respectable widow with property and means? This is the reward which Eleanor will earn simply by saying "I do," at the appropriate time and shutting her eyes to the impropriety. After all, she will not be called upon to perform any 'wifely duties' for the dying man, who, by the way, is well-known in the neighborhood as an unspeakable cad and generally unpleasant fellow.

But that's neither here nor there, there's no point speaking ill of the soon to be dead.

Lord Carlyon is persistent and persuasive and before too long, a wary Eleanor finds herself married and widowed and caught up in a plot involving sinister French spies (it is 1813, after all), murder, unlikely romance and a rather large dog named Bouncer.

Somehow I'd overlooked this book last year when I began - in earnest - my own Georgette Heyer festival of reading and rereading. But a post on another blog (can't remember where - apologies) alerted me to this book and also to the fact that it had been turned into into a film at some point. Haven't seen the film yet, but mean to.

And since this is Friday, don't forget to check in over at Patti Abbott's blog, Pattinase, to see what other Forgotten or Overlooked Books other bloggers are talking about today.