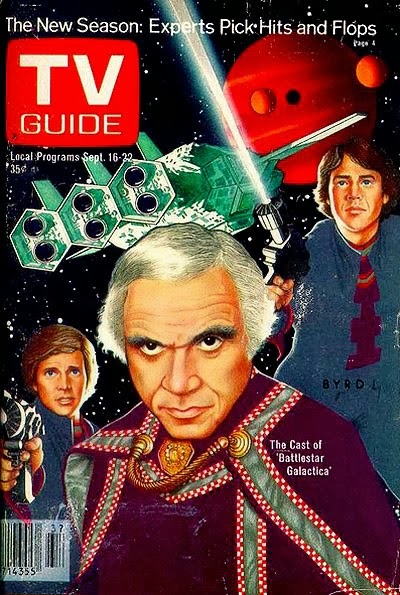 I never did watch the new and updated version of BATTLESTAR GALLACTICA primarily because I couldn't get used to and couldn't like the new and updated version of the Cylons. Why - they look just like us! What happened to the shiny bright metal armor and little red flashing lights zooming across their visors? More importantly: what happened to the catchy phrase, "By your command." ? 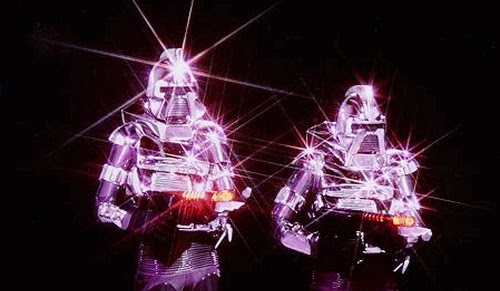 So back to 1978 and here's where I ask: Is it so very wrong of me to be rooting for the Cylons?

The 70's was the era of bad haircuts, bad fashions and clunky television effects effects, not to mention, embarrassingly bad acting by homogenized actors in luridly banal plots. Looking back it's a laugh-fest. So why am I talking about BATTLESTAR GALLACTICA at all? 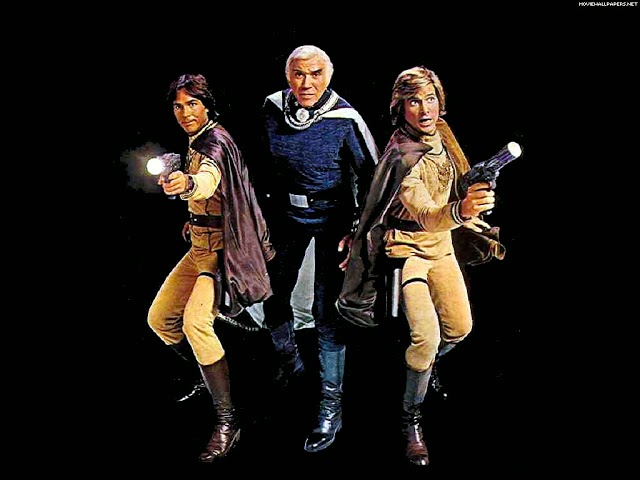 Well, snow is still coming down and I must be in a nostalgic sort of mood - hell, when am I not? Not that I miss the 70's much, but admittedly I did watch this show when it first came on and I must then have liked something about it. So I thought I'd do a little time-traveling since Netflix is streaming the full 24 episodes. It's always intriguing to play tag with the past.

Lorne Green starred as the fatherly figure (literally as he is the father of three of the Galatica's crew members) who heads the cast and crew of the Battlestar Galactica as it heads into the void hoping to run across the planet Earth. But wait, I'm getting ahead of myself as usual. First up: war with the Cylons.

Watched the initial two part episode when all hell broke loose in space and the guys promulgating peace were taught the terrible error of their ways (especially Lew Ayres as the chief peace monger for the human race) who should have known better than to trust John Colicos as Baltar, a 'tireless worker for peace'. 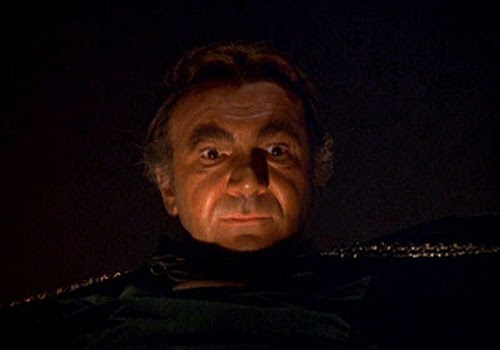 John Colicos? Are you kidding me? You only have to look at this guy to know that he's up to know good now, then, and forever. And here he is working hand in glove with the Cylons. I remember him in an early episode of the original STAR TREK. He played a Klingon when the designated make-up was just lots of eye shadow, a Fu Manchu mustache and raised eyebrows. It was in one of my favorite episodes so I do remember him vividly. He was deliciously wicked. Trust him? Nope.

Soon as I saw him in the first episodes of BATTLESTAR GALATICA, I said: Uh-oh.

Sure enough he betrays humanity but that was only to be expected. At least by me.

Is there anything about the show to like? (Besides getting a glimpse of all these old actors, some like Ray Milland, Lew Ayres, Dan O'Herlihy, Barry Nelson, Lloyd Bridges and even Fred Astaire near the end of their careers. Fred Astaire? Haven't seen that episode yet. Can't wait. )

1) The Cylon Centurians
2) John Colicos
3) The little robot dog.
4) The pilot warriors' helmets shaped something like the ancient Egyptians head gear.
5) The Cylon catch phrase: "By your command."
6) The opening sequence voiced by Patrick MacNee (Though it sure sounds like Wilfred Hyde-White to me.)
7) The gorgeous sound track by Stu Philips and Glen A. Larson


I'm currently re-watching BATTLESTAR episodes online but it's possible (indeed, probable) that I may overdose at some point in which case I will switch over to MIDSOMER MURDERS and give the newer episodes of that series a look. It's that kind of day.

Since it's Tuesday, don't forget to check in at Todd Mason's blog, Sweet Freedom, to see what other films, television or other audio/visuals other bloggers are talking about today.
Posted by Yvette at 10:00 AM