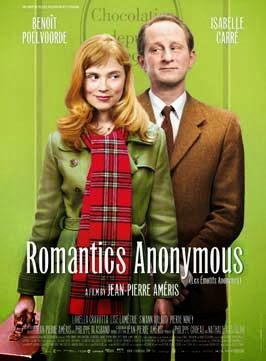 I've got the perfect little film for those romantics among us, what with Friday being Valentine's Day and all.

ROMANTICS ANONYMOUS is a delightful love story, a very French film (with English subtitles) which had me smiling throughout and actually laughing out loud in spots. What a captivating movie. The sort of light-hearted thing the French excel at and Americans stopped making ages ago (if they ever did). 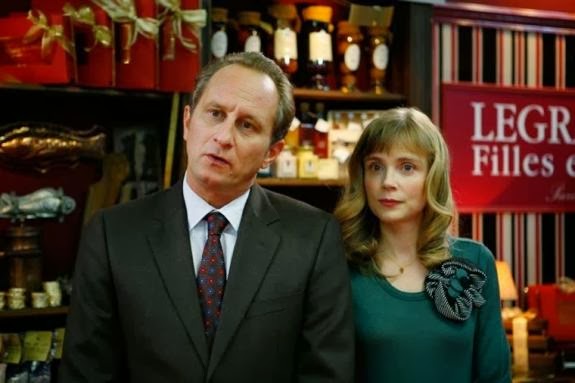 The leading man is not handsome, in fact he's kind of homely and hapless, but homely with charm will always win the day. As played by Benoit Poelvoorde (never heard of him either) he's got the kind of rubbery large nosed face which usually lends itself to humor and only occasionally to a love story. He plays Jean-Rene Van Den Hugde, the owner of a small chocolate factory (four employees) on the verge of bankruptcy. 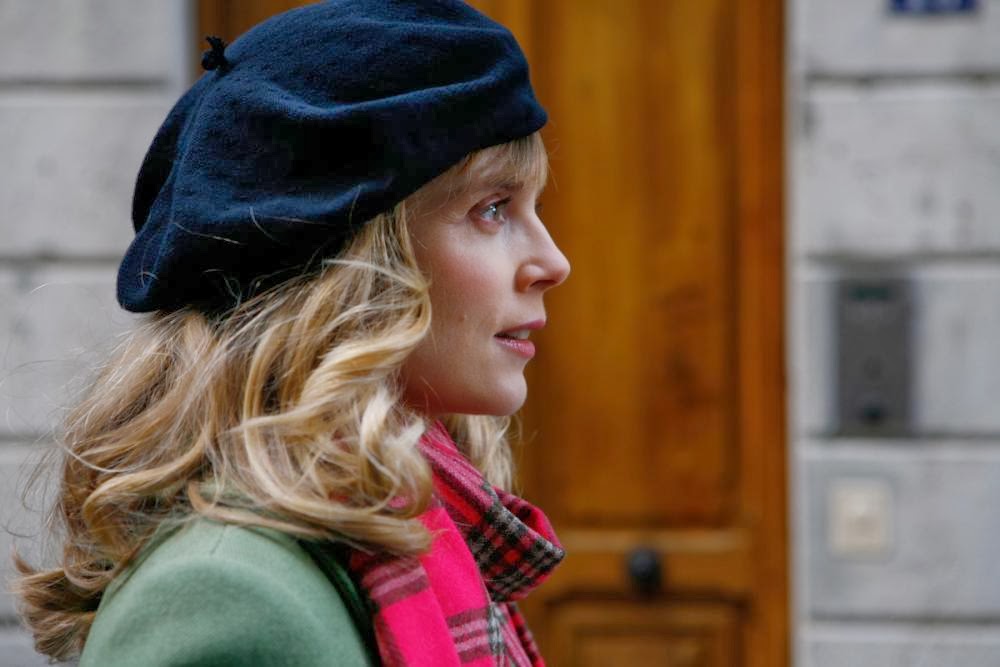 The adorable (but not TOO) Isabelle Carre plays Angelique Delange, a young woman who Jean-Rene has recently hired as a chocolate sales rep for his faltering company, though in fact, Angelique is a chocolatier extraordinaire and would much rather be making chocolates than selling them.

But here's the thing: Unknown to each other, Jean-Rene and Angelique suffer from the same emotional malaise. They are both uncommonly timid, afraid of life and totally, socially inept - to the point of acute embarrassment and the occasional fainting spell.

So when it's obvious that things are sympathique between employer and employee, can it lead anywhere? Neither of these two hapless beings has ever been in a relationship. 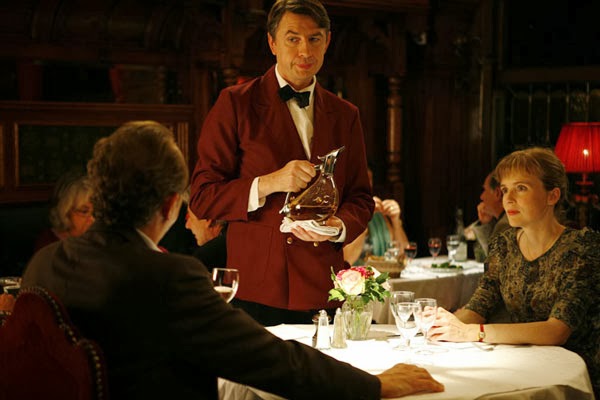 Angelique attends a Romantics Anonymous group where she and fellow sufferers bare their emotional mishaps.

Jean-Rene sees a psychiatrist who listens wisely and gives him little exercises to do. 'Ask someone out to dinner.' 'Touch someone.' That sort of thing.

What follows is an occasionally hilarious comedy of errors which proves once again that the road to true love is often bumpy and even chocolate cannot always save the day. (Though it doesn't hurt.) There are, of course - this being a 'chocolate' movie - several resolution-breaking chocolate tasting scenes which made me want to rush out and buy a pound or two of my favorite chocolate covered caramels. Though the chocolates created in the movie are of a much more esoteric sort. They're French, you know.

It's been a while since I've seen a film this sweet-natured and endearing. There are even a couple of songs included - both musical scenes low-key enough to be perfectly in keeping with the general spell of enchantment. Yes, I'm getting carried away, but you know, it's THAT kind of movie.

Since it's Tuesday, don't forget to check in at Todd Mason's blog, Sweet Freedom, to see what other forgotten (or overlooked) films, television or audio visuals other bloggers are talking about today.
Posted by Yvette at 9:30 AM