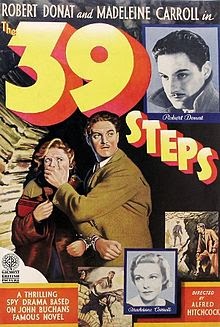 I know, I know, this is not REALLY a 'forgotten or overlooked' film, but it's one of my all time favorites and I've been meaning to write about it for awhile now and what the heck. Make believe you never heard of it. And it does, after all, fit my definition of 'romance' - I'm bound to the theme since Valentine's Day is just around the corner.

THE 39 STEPS is a film directed by Alfred Hitchcock, written by Charles Bennett who adapted it from the novel by John Buchan. In my opinion, it is one of those very rare instances when a film is better than the book source. (I think I read somewhere that Buchan thought so too.) 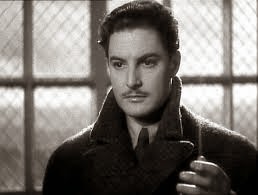 The low-key sexy charm of Robert Donat, his enticing screen presence, cannot be underscored enough. It is one of the main reasons for the success of the film - at least in my eyes. Here he plays Richard Hannay, an innocent man on the run from the authorities - sound familiar?

Hannay is a Canadian visitor staying in London. One evening - garbed very attractively in a fetching coat with upturned collar - he attends a 'variety' show where one of the acts is a certain Mr. Memory.  This is an odd little man who, apparently, has instant recall of thousands of facts with which he amazes the audience whom he invites to hurl questions at him. When a loud disturbance erupts among the rowdy audience, Hannay slips out and is accosted by a fellow theater-goer, a mysterious woman (played in just the right mysterious and slinky way by Lucie Mannheim) who tells him she is being followed. Hannay, intrigued by the idea and her attractiveness, gallantly agrees to escort her. She tells him her name is Smith. Uh-oh.

Hannay takes Miss Smith home to his flat for what, I'm sure he imagines, is some sort of romantic tryst even if she will keep talking about spies, deadly conspiracy and something called 'the 39 steps'. Surely she must be fantasizing.

He fries her a kipper.

She warns Hannay to look out for a man with a missing finger-tip.

However, Hannay does begin to believe her tale when out of his window, he spots two men lurking by a phone booth - men the mystery woman insists are following her. When the phone rings, she tells him not to pick it up. (I've always wondered how the two shadowy men knew his phone number.)

Later that same night, Miss Smith is stabbed in the back with a kitchen knife.

How will Hannay explain a murdered woman in his rooms?

In the morning, the resourceful Hannay disguises himself as the milkman and goes on the run - entrusted (by circumstance) with Miss Smith's assignment to help stop a spy ring from passing on top secret information to the enemy. To that end he must make his way to Scotland. He does so with the police hot on his trail. 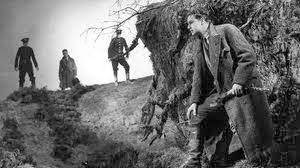 The shadowy scenes of fight or flight that ensue are elegant and frenzied, somehow both at the same time. This is director Hitchcock honing his skills then and for later use - innocent man on the run seemingly being a favorite motif.

There are three pivotal women in this film, two I like, one I don't - at least not at first. 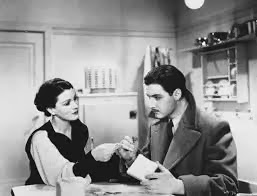 1) I liked Lucie Mannheim as the mysterious Miss Smith and I've always felt she was just too intriguing a character to have been killed off so immediately. But for plot purposes, she had to go. (The original spy in the book is a man, by the way. For the film, a woman just makes more visual sense.) 2) I liked the gutsy young crofter's wife (Peggy Ashcroft) Hannay meets in Scotland. Though she is trapped in a marriage to a brutal and suspicious older man (John Laurie), that doesn't stop her from helping Hannay to escape. I really wish that this was the woman Hannay had wound up with - somehow. Donat and Ashcroft's scenes together are quietly intense and very moving. 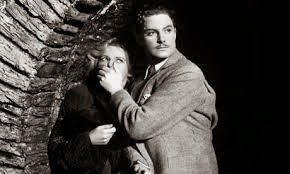 3) And now we come to Madeleine Carroll as Pamela, the requisite blond of the piece. She begins by antagonizing the audience and it goes downhill from there until it FINALLY dawns on her that she should be helping Hannay, not hindering his desperate progress. (They first meet on a train, for goodness' sake! What could be more intriguing? Has this woman no romance in her soul?) Can't help it, it always takes me a long time to warm up to this character (who doesn't exist in the book) as she goes from dither-head 'hostage' to willing help-mate. (They spend part of the film hand-cuffed together.) I just wish Hitchcock hadn't waited so long to make her see the light. Though Hannay is remarkably patient, at a certain point you just want to throw up your hands and give old Pamela the heave-ho. 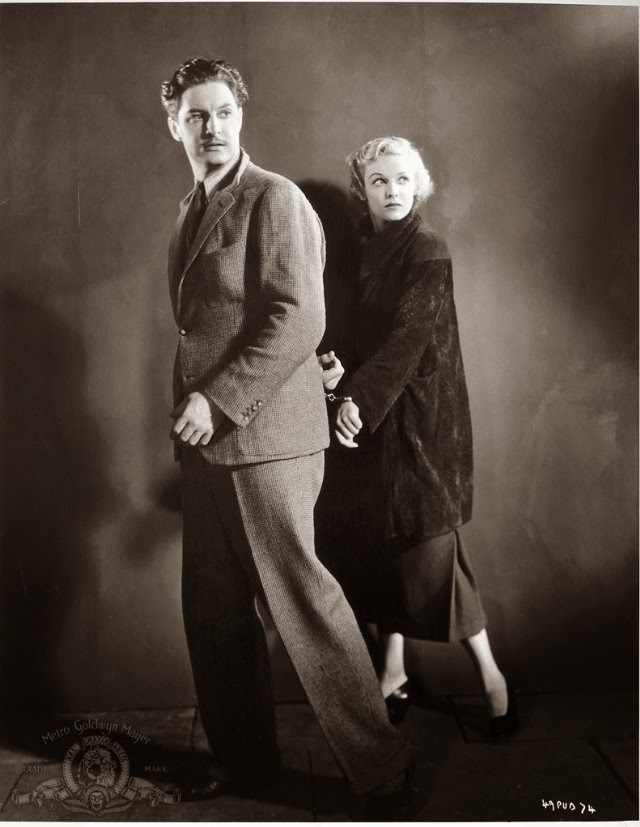 Yes, yes, they wind up together in the end. I said this was a romance.

How the story unfolds is wonderfully rich in esoteric detail - remember the missing finger-tip? Love the scene where Hannay is mistaken for an expected public speaker and must give a speech to a women's garden club. Another favorite scene is one in which an afternoon tea party/family gathering embodies the 'banality of evil' ideal. And the ending comes full circle in satisfying way. Remember Mr. Memory?

It it's Tuesday, it's time to check in at Todd Mason's blog, Sweet Freedom, to see what other forgotten or overlooked films, television or other audio/visuals other bloggers are talking about today. Behind the scenes with Hitchcock on the set of The 39 Steps.