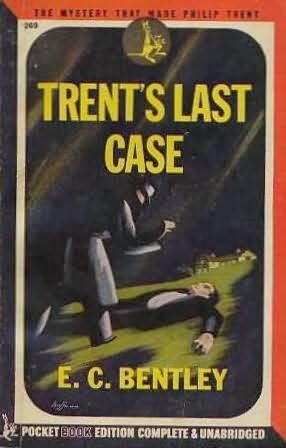 I'd heard of this book over the years and always meant to read it but with one thing and another just never got the chance until this past month- helped by a free download from Project Guttenberg.

Next to Sherlock Holmes I believe this to be one of the first 'gentleman detective' whodunits in which an impressively prescient all-knowing detective with the correct class British accent makes his debut. Though Arthur Conan Doyle's writing style was much brisker and less flowery than Bentley's, TRENT'S LAST CASE is not much hindered by the tone of its occasionally overwrought early 20th century writing style - at least not so much as you might think. It takes a bit of getting used to, but once you're in, you're in.

Not that our detecting genius Philip Trent knows what's what from the first, he just gives that impression. Unlikely as it may seem, Trent is apparently well known all over Britain as the prime crime solver. He is backed by a newspaper although he is not a regular reporter, just a crime solving journalist - apparently the one to go to when mysterious murder occurs and the police are baffled. In truth he is some sort of artist who manages to squeeze in his paintings between crime solving - or vice versa. He is unique in the annals of crime, I suppose - very choosy and select about the mysteries he will undertake to solve.

When renowned international financier (living in Great Britain) Sigsbee Manderson is found dead on the grounds of his estate, financial institutions around the world shudder in dread and the police are stumped. What was the dead man doing outside in the middle of the night? Was it suicide? If so, where is the weapon? And why was the dead man wearing such an odd assortment of clothing? Most importantly, why wasn't he wearing his dentures?

All questions are soon to be answered (apparently) by Philip Trent once he arrives on the scene and begins his immediate sleuthing.The odd thing is, to my  mind at least, that the cops don't seem to mind Trent's arrival and bustling interference. In fact, they welcome it.

Trent discovers that the wealthy and somewhat reclusive Manderson was a very difficult man to live with and had no friends to speak of. He did, however, have two secretaries, both male, one American, one British, and a staff of properly respectful if keen-eyed servants. He also had a beautiful wife - the melancholy Mabel, clearly unhappy in her marriage to the much older man.

Several stylistic 'rules' are broken in the telling of this tale which was occasioned by a challenge to Bentley by his friend, mystery writer G.K. Chesterton, to write a story about a 'new kind of detective.'

While Trent furiously deduces a solution to the whole mystery (quick as a wink in three days) he is hampered by the fact that he's fallen for the beautiful Mabel. There are several clever (if convoluted) twists in the story which are not unraveled until the very end. That Trent's initial deduction is completely wrong doesn't dawn on him until much later (he's gone away to mend his broken heart) when he has occasion to confront one of the initial suspects and get the full true story.

(Luckily, through some adroit plot machinations, no innocent person was arrested.)

To read more about TRENT'S LAST CASE and its author, please check out J. Kingston Pierce's post at one of the best mystery/thriller websites on the web, The Rap Sheet.

And since it's Friday, don't forget to visit Patti Abbott's blog, Pattinase, to see what other Forgotten or Overlooked Books other bloggers are talking about today.