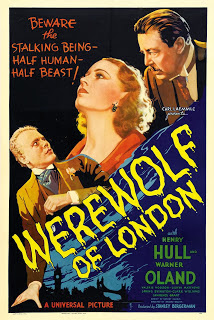 Not to worry, I'm not talking about that odiously brutal and bloody film made in 1981 (with all kinds of newfangled hairy and fang-y special effects) about two callow American youths on the loose in London - one of them a werewolf. Ugh. Not my kind of film whatsoever.

Nor am I talking about THE WOLF MAN (1941) starring the eponymous Lon Chaney, Jr. which I suppose has become the standard by which all werewolf films are judged. At least among those of us with good long affectionate memories. Plus this is the movie with the never to be forgotten Maria Ouspenskaya as a gypsy woman. If you had to pick just one werewolf film to watch above all others, this would be it.

But luckily, we're not forced to choose. 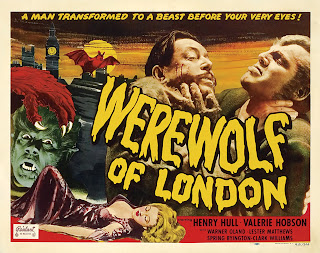 My particular film is from 1935 and offers a version of a wolf man whose terrible side-effects can be contained by the serum from a flower which only grows in the mountains of Tibet. (Of course.) And which only blooms by moonlight. (Of course.) The mariposa something or other - a supposedly Latin name which Warner Oland as a fellow werewolf stumbles over in conversation with Henry Hull who is about to blossom (so to speak) as a werewolf in the full bloom of a London moon.

WEREWOLF OF LONDON (1935) is a film directed by Stuart Walker starring Henry Hull, Valerie Hobson and Warner Oland. Despite the year, this is not as archaic as one might think or expect. In fact, it's not a bad film at all, probably because of the terrific cast which also includes Spring Byington as a chatty air-headed friend (or aunt) of the leading lady and a guy named Lester Matthews who is quite good as Valerie Hobson's childhood chum and spurned boyfriend, Paul, who has arrived back on the scene, it would seem, just in the nick of time. 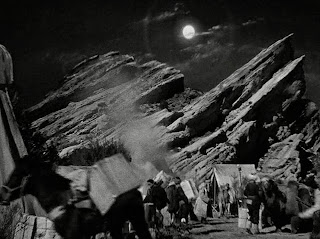 Henry Hull plays Dr. Wilfred Glendon, a botanist traveling in the wilds of Tibet searching for a rare flower. While in the mountains, his superstitious bearers desert him and his traveling companion, but the two men soldier on. Hunting for flower specimens is not a job for the faint of heart. 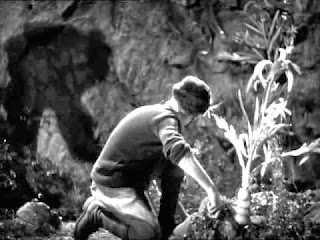 When Hull stumbles across the elusive blossom on a mysterious ridge in the moonlight, he is attacked by a werewolf and bitten on the arm. Watching the goings-on is yet another werewolf hidden behind some rocks. Little did we know that the hills of Tibet are apparently teeming with lycanthropic bad guys. 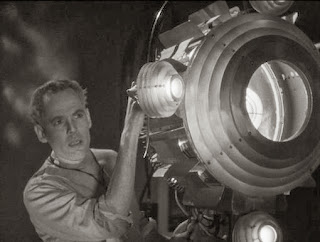 At any rate, the scene then switches to the civilized environs of London and Dr. Glendon's home and laboratory where he is currently attempting to force the rare moon flower to bloom (he's managed, despite his tribulations, to bring a specimen back from Tibet). We meet his lovely wife, Lisa (Valerie Hobson) and their chatty friend Ettie Coombs (Spring Byington) - both of whom are forbidden entrance to the inner recesses of Glendon's lab.

It develops that the scene outside the laboratory on this particular day is that of a jovial afternoon tea party/exhibition of the collection of rare plants that Dr. Glendon is famed for. Among his many specimens available for public viewing are large carnivorous plants that eat bugs and frogs and manifest all sorts of odd behavior - kind of like that plant in Little Shop of Horrors. In fact, we notice that Ettie Coombs has a small dog and we immediately fear for its life in that garden of nasty flora. I mean, I had heart palpitations.

Fortunately for us and the little dog, the director doesn't go there - though that doesn't lessen our expectation that he might. 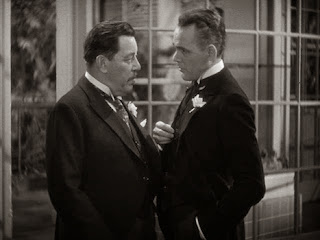 Well, as the party progresses, a sinister stranger (played by Warner Oland of Charlie Chan fame) named Dr. Yogami (but whom Ettie persists is calling Dr. Yokahama) shows up uninvited. He tries to get in to see the Tibetan flower he knows that Glendon has in his inner lab. Dropping hints all over the place about 'werewolfery', we are led to understand that Yogami must be the other werewolf - the one who was watching the attack on Glendon from behind the rocks. Glendon seems awfully dense about this and refuses to help Yogami. 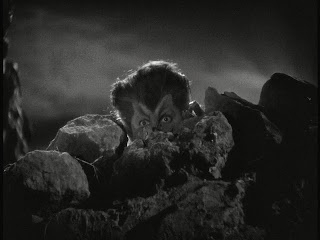 When Glendon asks Yogami whether they have met before, Yogami eerily says, yes, they met in Tibet, in the dark. Hmmmm....

Later, Yogami goes so far as to warn Glendon that a werewolf must kill the thing he loves most. Uh-oh. 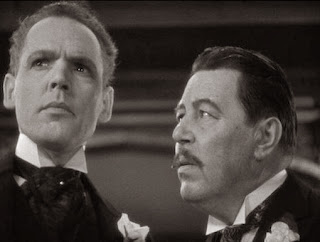 What I don't understand is how Yogami is able to keep from changing into a werewolf for what seems like an inordinate amount of time, but that's neither here nor there. We never do see Yogami growing fangs or covered in messy hair.

Later, when the blossoms are stolen from the laboratory, we see a smiling Yogami using the serum. But he knows and we know that there are only two blossoms and none readily blooming in the lab. Glendon is devastated at the loss of his moon flowers because he too was using their serum to prevent his lycanthropic tendencies from coming to the fore - as it were.

What's a werewolf to do? 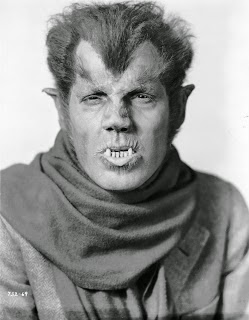 Without the serum, Glendon runs riot in and out of the dark alleys of London and even goes so far as to climb up into Ettie Coombs' bedroom during a party - her new house is located at the edge of a not so nice neighborhood. Isn't it interesting how werewolfs (and for that matter, vampires and such) always seem to stick to the poorer districts. Don't the rich deserve to be killed with the same impunity? But I digress...

Ettie - being rich - manages to shriek loud enough to save herself as everyone comes stampeding into her room. Assuming she's had a bad dream (the head of Scotland Yard is one of her guests) - Ettie was taking a nap after imbibing too much at her own party - the men poo-poo her claims of being assaulted by a beast. (You'd think she'd have SOME marks on her. But apparently not.) 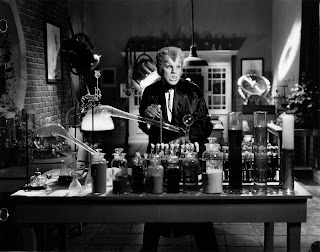 After several nights and several deaths of low-life women (the expendable kind), their bodies torn apart by some sort of animal, it dawns on the cops that maybe there was something in Ettie's story. Then of course, there's that unnatural howling heard in the night.

In the meantime, Wilfred's marriage to Lisa appears headed downhill. Even when he's not being a werewolf, he treats her as if she is his to command. Though she tries hard to include him in her activities, he is always too busy to take part. (Don't forget he spent months traveling in Asia without her.) And that's where Paul her childhood friend comes in. He's still in love with her and though an honorable man, he is only to happy to spend time with Lisa. 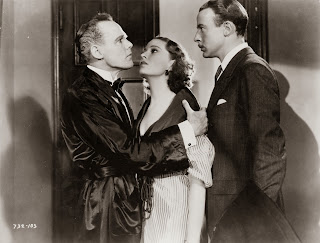 Wilfred is naturally jealous and who can blame him? But Lisa has had enough of his coldness and shutting himself up in his laboratory at all hours of the day and night, she wants to have a bit of fun. Who can blame her?

The ineffectual doctor takes a small room in a shabby neighborhood and barricades himself to spend the night. (There is a funny bit between two gin-soaked rival landladies who keep knocking each other out in their quest to rent their rooms and/or find out what is going on.) But soon as he turns wolf, Wilfred jumps through the window and off he goes. Then later he heads on up to his country manor and barricades himself in the tower much to his servant's consternation. But that doesn't help either, especially when Lisa and Paul show up so that Paul can get another look at the house he knew as a boy.


Wilfred attacks Lisa but Paul steps in and yet somehow both avoid being bitten. But the damage is done, Paul recognizes the werewolf as Dr. Glendon. Uh-oh.


Near the end there's also a fight to the death in the laboratory between the two werewolves, Wilfred and Dr. Yogami.

Wilfred survives only to be shot dead later at his home, by the head of Scotland Yard. As he dies, of course his appearance reverts to that of his human self.

The special effects in this film (the hairiness and fangs and all) are not as comprehensive as they will appear later in Lon Chaney Jr.'s version of the wolf man because, from what I read somewhere, the actor Henry Hull didn't want to spend hours sitting in a make-up chair.

Besides in this version of werewolfery, as Dr. Yogami explains:

"The werewolf is neither man nor wolf, but a Satanic creature with the worst qualities of both."

That would explain why before he heads out for a night's butchery, Wilfred puts on a coat and scarf and hat. Those cold London nights can be killers. 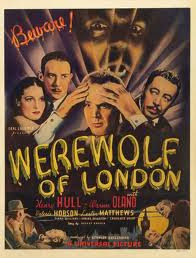 This is an excellent movie for Halloween or for that matter, any other night of this spooky old month when the forces of evil are exalted. If you'd like, you can watch it on youtube at this
link.

Since it's Tuesday, naturally it's Forgotten (or Overlooked) Films day. But Todd Mason who normally would gather the links has family business to take care of, so there may be no links today. Please check in at his blog, Sweet Freedom, to see what's what.
Posted by Yvette at 10:00 AM