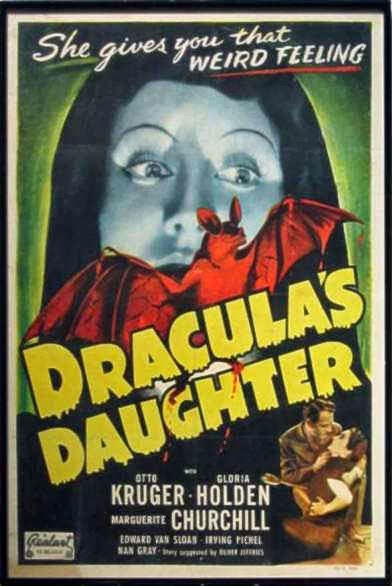 Since Halloween is just around the corner, I'll be featuring some 'overlooked or forgotten' horror films each Tuesday before The Big Day. As many of you know, I'm not REALLY a horror movie buff, but just to be contrary (as I am fond of being) I do like and enjoy 'monster movies' from the past, most of which left the blood and guts stuff to the imagination - thank goodness. It was mostly about atmospherics then.

Last Tuesday it was WEREWOLF OF LONDON (1935) and this week it's DRACULA'S DAUGHTER (1936). This is a spooky gem I haven't seen in years and years and just found recently on a neat website (not youtube) where apparently anyone can watch a very good print of this creepy old movie for free.


DRACULA'S DAUGHTER is a 1936 film directed by Lambert Hillyer starring Gloria Holden and Otto Kruger. Wikipedia has a comprehensive page detailing the wrangling over the script and cast and who would direct (it was originally meant for James Whale - director of FRANKENSTEIN - who wanted no part of another horror film) but no matter, after many re-writes (the script was only marginally based on a Bram Stoker short story), and even more wrangling with the Production Code people who objected to the film's rather obvious lesbian overtones, a director and cast were finalized.

The film was not as fabulously ghoulish or successful as its predecessor, DRACULA, starring Bela Lugosi, nonetheless DRACULA'S DAUGHTER has enough foggy atmospherics, dark shadows, mysterious murders (which happen off screen) and vampire mumbo-jumbo to satisfy those of us who relish this sort of thing - within reason. We even have the presence of the satisfyingly eccentric Professor Von Helsing and near the end a mad dash in the dead of night from London to Transylvania and Dracula's castle. 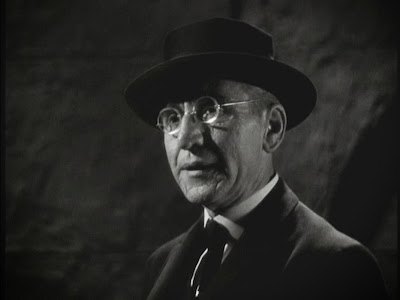 Mild-mannered vampire hunter Professor Von Helsing (Edward Van Sloan) is picked up by Scotland Yard for the murder of Count Dracula - he was caught red-handed in a dark underground crypt near an open coffin - dead vampire within, wooden stake driven through heart. (Is it murder if you kill a man who's been dead for 500 years?)

Von Helsing spins the usual vampire tale to the cops. He is disbelieved by Sir Basil Humphrey (Gilbert Emery), Head of Scotland Yard, who assumes the good professor must be mad. 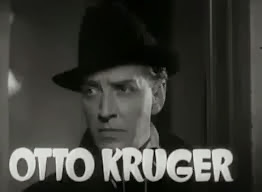 Von Helsing turns to his old student, steely-browed Dr. Jeffrey Garth (Otto Kruger), a successful London psychiatrist. Though Garth is no detective, he will try and help his friend even if he doesn't believe in vampires.

He's an 'it's all in your mind' practitioner who comes complete with a perky socialite secretary whose main job it appears, is to manage the good doctor's bow tie. 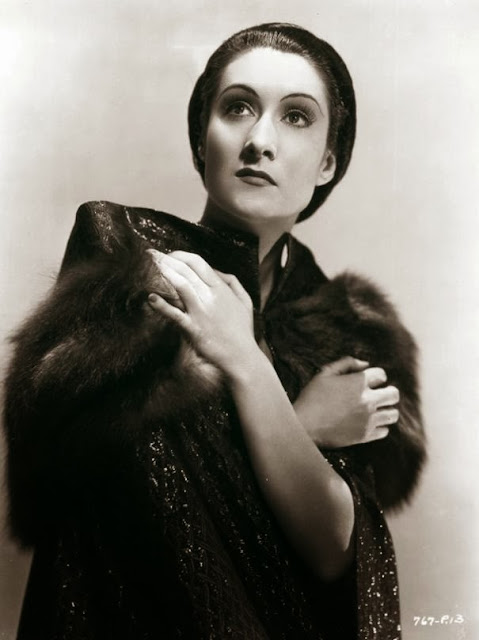 
She comes complete with a lamentable Servant/Henchman With Aspirations named Sandor (Irving Pichel). Sandor's grooming, unfortunately, leaves a lot to be desired. He looks as if he's wearing lipstick and worse, he parts his hair in the middle. Tsk. Tsk.

We meet the creepy pair early on when under the noses of the cops, the Countess disables a London bobby and absconds with Dracula's body. Out in the dark countryside she then sets fire to the coffin and contents, watched over by her sartorially-challenged henchman. 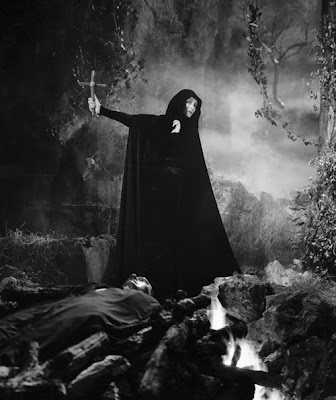 See, the countess figures that if she burns Dracula's body she'll be free of its cursed influence. She's not happy being a vampire. She wants to lead a 'normal' life once again. She wants to play happy music on her piano. 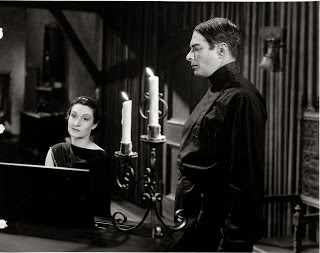 Sandor scoffs at her wishful thinking. He sees nothing but death in Zeleska's eyes. Let's face it, the guy is a total downer. 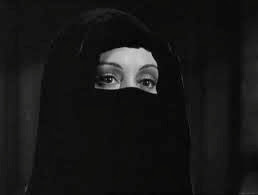 But as it happens, his doom and gloom prognostication is right. Zeleska's hideous compulsion is not to be denied. Soon enough, on a suitably foggy night, a dandy in top hat and tails becomes the next hapless victim. 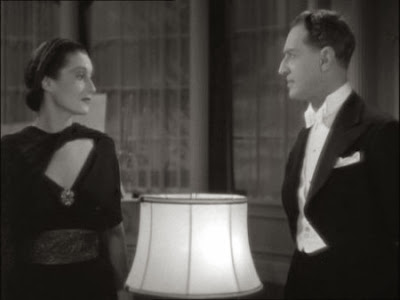 In the meantime, Zeleska (she passes as a mysterious artist in society circles) has zeroed in on Dr. Garth (Otto Kruger) at a London party. Since he's a renowned psychiatrist he must help her fight her deadly compulsions. At first Garth is intrigued and confident he can help her - but that's only because he's not aware she's an actual member of the undead fraternity. 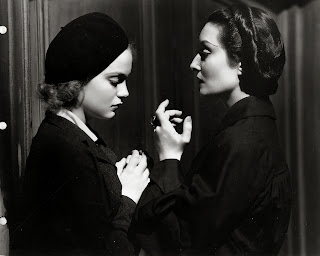 When a sweetly innocent (and indigent) young thing is brought to the Countess's studio to pose for a portrait (now where have I heard that story before?) she soon meets her fate as yet another of Zeleska's victims. 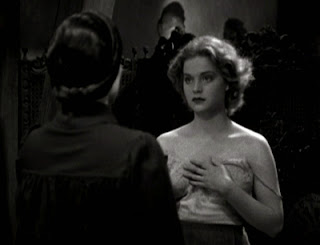 But fortunately not before the girl is hypnotized by Dr. Garth in her hospital bed and with dying breath clues him in to Countess Zeleska's real nature. (They also notice the two tiny puncture marks on her neck. Zeleska is not a sloppy diner.)

Somewhere in the vague recesses of my mind there lurks a scene full of creepy allegory in which the young model is strapped to an X shaped wooden cross while the Countess leers at her. But damn if I can find any proof of this scene's existence in any of my old film books. I know I've seen it and I thought I remembered reading the scene had been cut from later versions of the film. But I'm probably wrong. Of course it might have been another film altogether. You know how old lady memory works...or not.

At any rate, once the jig is up, so to speak, the Countess, who is nothing if not adaptable, insists that Doctor Garth accompany her on a late night flight to Transylvania. Once there she will welcome him into the legion of the undead and he will rule by her side forever. Sounds like a plan. 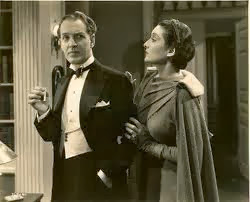 Except: Sandor balks. Wait a sec, he was promised eternal life first. But really, with hair parted in the middle - what did he expect?

The doctor balks too. He has no wish for eternal life, Zeleska must be mad. 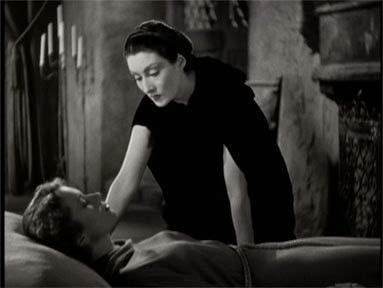 So to ensure his cooperation, the Countess kidnaps the doctor's perky secretary (whom Garth secretly loves, of course) and off we go to Transylvania. Where the first thing we see is a happy peasant wedding and happy peasants dancing.

Until they spot a light on in the supposedly abandoned Dracula Castle. Uh-oh.

Terror has returned to the foothills of Transylvania. The peasants scatter. Hot on the trail of the Countess, Garth lands his plane (did I forget to mention that the good doctor is also a pilot?) in the Transylvanian countryside and hires a coach with a nervous coachman to take him to Dracula's Castle. Having some iota of good sense, the coachman will only go so far and the rest of the way the doctor must manage on foot.

In the end, good triumphs over evil (in a roundabout way) as a second plane carrying the Head of Scotland Yard and Professor Von Helsing arrives in the nick of time.

Though most of this film takes place in London, there is nary an English accent to be heard in the cast. It's a mish-mash of American accents and English pretending wannabes. Even the very few English actors, don't sound quite right. The young model who meets her fate at the Countess's hands sounds positively American Southern. Very odd.

And oh by the way, since when does the head of Scotland Yard actively chase criminals? And country to country? Transylvania is not exactly next door to London (as perhaps implied in the film).

In a scene early on, Doctor Garth is supposed to be on a shooting holiday. He stands holding a shotgun stock down, double barrel pointing up at his own head while leaning against a car and talking to his secretary who has shown up to cut his holiday short. I don't know much about guns and things, but this seems not the advisable way to handle firearms. And oh by the way, does it really take a double barrel to shoot grouse?

Despite these minor blips, DRACULA'S DAUGHTER still makes for a creepily good film for any dark and stormy night - especially in October.

Since it's Tuesday, this is my entry in the weekly meme usually hosted by Todd Mason as this blog, Sweet Freedom. So don't forget to check in and see what other films and/or audio/visuals other bloggers are talking about today. 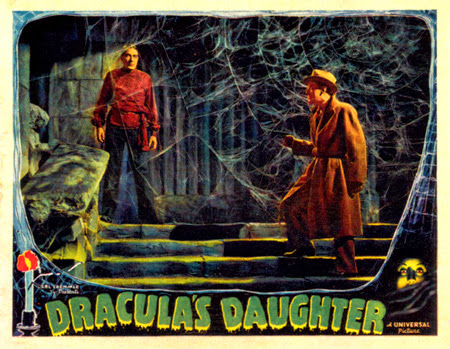