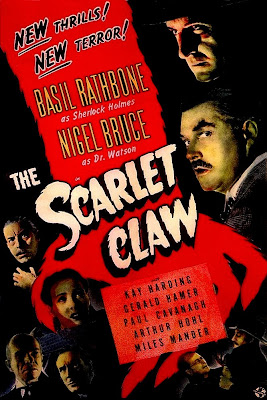 Of all the Sherlock Holmes films starring Basil Rathbone and Nigel Bruce, I think this is the one with the most creepy-scary moments - so I am hereby qualifying it as a tip-top Halloween offering.

THE SCARLET CLAW (1944) is a film directed by Roy William Neill (as were most of the Holmes/Watson movies released by Universal) and it is based, far as I know, on nothing Conan Doyle ever wrote (except for the characters), especially since the action takes place in Canada.

Holmes (Basil Rathbone) and Watson (Nigel Bruce) are, for no apparent reason that I can make heads or tails of, traveling in Canada to attend some sort of conference on the occult. Here's why it makes no sense: Holmes doesn't believe in spooks and spirits so why would he travel halfway around the world just to tell people who do, that he doesn't. See what I mean? 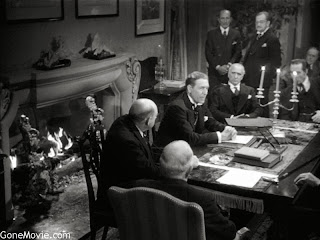 At any rate, here we are in Quebec at a posh hotel.

Just as Lord Penrose (the always good for a 'sneer' Paul Cavanaugh) is addressing the conference on his belief in things supernatural - coming up against Holmes' disbelief - he receives news that his wife has been found dead back home. Without much hint of emotion, he stiffly informs the conference members that Lady Penrose's body has been discovered by the village priest in the local church - her throat torn out. I mean, jeez.

Though mortally wounded, she had dragged herself to the church where she clutched at the bell pull in a last desperate attempt to bring help. (The manor house has no phone.) Unfortunately for her, the village people in the charmingly named village of La Mort Rouge are not inclined to go out in the night just to answer the odd bell ringing or two.

Eventually, the priest did set out for the church and discovered the body. Now I don't know about you, but I'd imagine a cut throat would be rather a bloody thing, but nary a hint of blood or wound are we shown even when the priest looks down at the unfortunate lady's body. I'm the last person in the world - heaven knows - to call for blood and guts, but really, the whole thing looks a little too antiseptic even to me.

Lord Penrose declines Holmes' immediate offer of help in investigating his wife's death. He is convinced that Lady Penrose has been done in by some supernatural evil lurking in his aptly named home town.

But Holmes is surprised the next morning as he and Watson are preparing to return to London, to discover a letter asking for his help. The letter was written by none other than Lady Penrose herself just days before her tragic death.

As Holmes' says, "Imagine the irony, Watson. For the first time we have been retained by a corpse." (Or words to that effect.) 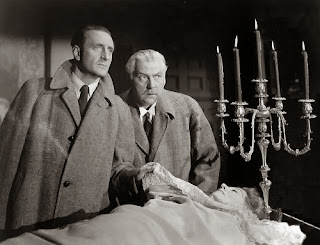 Despite Lord Penrose's standoff-ishness, Holmes and Watson travel to the gloomy (not to mention, foggy and shadowy) village of La Mort Rouge to investigate the murder of Lady Penrose. 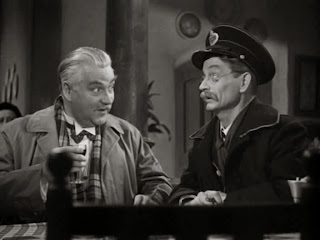 To that end, the villagers they meet up with, including a rather garrulous post man and a surly publican with a sweetly innocent daughter, are a nervous and suspicious lot full of superstitious nonsense stemming from the fact that some sheep have recently been found nearby with their throats cut. Yeah, that would be enough to make me nervous and suspicious, I admit it.

La Mort Rouge is one of those grim places with a tedious history where everything happens at night and daylight is a rare commodity. 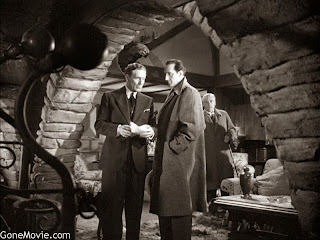 Of course Holmes, the most rational of men, is not convinced that the evil they're dealing with is of the supernatural variety, not even after coming across a ghostly figure prancing about the fields in the dark. 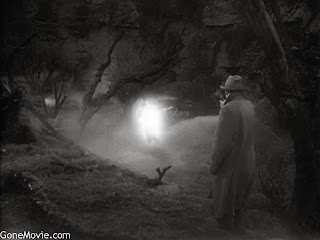 Unable to prevent a couple more murders, Holmes comes to realize that the victims (except one) all share a common - if improbable - link and that a brutal killer, adept at disguise, is actually lurking among the villagers, hiding in plain sight.

In this as in so many Holmes' movies made at Universal, we have a familiar cast of character actors who appear over and over again in various and sundry parts: Gerald Hamer, Paul Cavanaugh, Arthur Hohl, Miles Mander, David Clyde and the always wonderfully creepy Ian Wolfe among others. 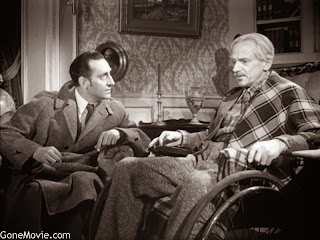 It's almost like little theater where the same actors take different parts, sometimes as villains, sometimes as heroes, sometimes bit parts, sometimes more. It's always fun to distinguish among them and realize where and when you've seen them before. The only constants are Holmes and Watson and occasionally Inspector Lestrade of Scotland Yard (Dennis Hoey,who does not appear in this film).

If THE SCARLET CLAW is successful, believe me it is not because of the rather hackneyed, illogical script. (Which is basically a version of The Hound of the Baskervilles, minus the hound.) What works for me best are the creepy atmospherics (and you know how important I think those are). 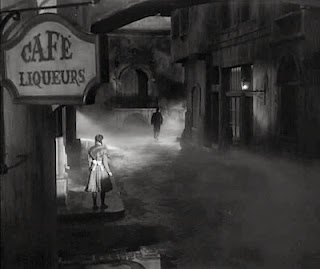 As I mentioned, everything happens in the dark of night - all is doom and gloom, and the murder weapon, a five pronged garden weeder, is as nasty as it sounds. 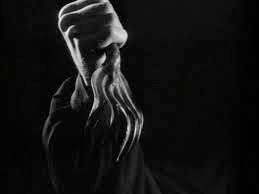 So, throw logic out the window, fix a batch of popcorn and prepare to enjoy another moody Halloween flick which will get you in the mood but will not gross you out.

Preview the original trailer here.
Posted by Yvette at 10:00 AM