EVENING IN THE PALACE OF REASON - Bach Meets Frederick the Great in the Age of Enlightenment by James R. Gaines 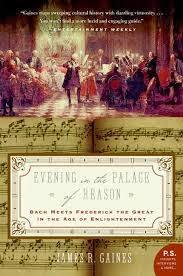 A book I've just finished and LOVED and am recommending to the heavens (as in highly) even if you can't read music (I can't) and are not familiar with some of the musical work mentioned (that's easily rectified).

But as much as I loved EVENING IN THE PALACE OF REASON - Bach Meets Frederick the Great in the Age of Enlightenment by James R. Gaines, I won't be reviewing it only because I rarely if ever review non-fiction, especially historical non-fiction. I find it too intimidating.

However, I will just post this heads-up for those of you who have any modicum of interest in European history, music, the workings of genius, Bach in particular (not to mention Frederick the Great) and, oh by the way, splendid writing.

I'll also thank Roberta at Books to the Ceiling for originally recommending Gaines' book a while back. You can read some of her comments at the link and also link through to a couple of stirring performances of Bach. Some of the links have faded away into oblivion since this was posted in 2010, but there's enough to whet your appetite.

Additionally, here's a link to a BBC bio (on youtube) of Frederick the Great.

Bach in Baltimore features Sunday with Bach and other musical goodies for those fortunate enough to live in the area. For those not, there's plenty of Bach on youtube. But I have a suspicion I'm going to be buying a few more CDs.
Posted by Yvette at 2:04 PM