Friday's Forgotten (or Overlooked) Book: THE MAN IN THE TRICORN HAT (1960) by Delano Ames 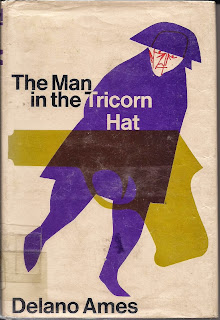 The English writer Delano Ames (1906-1987) wrote lots and lots of books, the titles of which I've just recently discovered online. Most of you know how enamored I am with Delano Ames' Dagobert and Jane Brown mystery series since I've (unashamedly) shared my enthusiasm - gone overboard, some may say. But when it comes to newly discovered authors, there's no such thing as too much shouting from the rooftops far as I'm concerned.

Isn't it thrilling to find an unknown vintage author (unknown to me anyway) and suddenly realize that there's a bunch of unread/unheard-of books out there? If you can find them, of course. The hunt is on!

To that end, I've just ordered two more Delano Ames books (all I can find that are affordable at the moment) and can't wait to see if they live up to the previous Dagobert and Jane puzzlers. Oh how I love those two amateur crime solvers.

But I'm not writing about them today, so enough of that.

Turns out that Delano Ames had another series, this one featuring the affable Juan Llorca, a member of the Spanish constabulary:

"You know those gaunt figures who appear in pairs on lonely Spanish roads, scaring the wits out of everybody with their black tricorn hats, great green cloaks and rifles? Well, one of them was my friend Paco. The other - the one with the five days' black stubble on his chin and a patch of dirty sticking-plaster on his left ear - was me.

Also my feet hurt. We'd had nearly a week of what they call 'servicio de campo', which means pushing around the countryside listening to complaints about the neighbour's goats, keeping the gypsies on the move and sleeping in our cloaks.

When we left Madrigal del Mar fives days ago there were the usual rumours that the hinterland was crawling with suspicious characters. Paco, who reads El Coyote and the comics, had great hopes about Red spies, or at least white slavers; but we hadn't seen anything out of the ordinary except old Don Fernando, who is well known to be crazy."

I love the first person point of view so I was already won over by time I finished reading these opening paragraphs of the first Juan Llorca book. I also love when an author has a droll sense of humor which (coincidentally) more or less matches mine. Delano Ames and I are on the same wavelength. Ah, bliss.

Juan Llorca is apparently the only Civil Guard member, currently assigned to duty in the small fishing village of Madrigal, who has any active sleuthing brainpower. Everyone else is out for numero uno including the alcalde (mayor), playing political one-up-man-ship, not really caring if justice is served. Sound familiar?

On the outside, the attractive if somewhat nebishy Llorca is a punctilious officer ready to do his duty even while wearing a black patent leather tricorn hat. But at heart he is a romantic with a somewhat sensitive self-image. Llorca has his eye on the beautiful but confounding English artist Julia Fairfax, newly settled in Madrigal. Is she sending Juan come hither signals or is she not? Is she married or is she not?  Why is she so reluctant to discuss her background? Aside from that - is she a murderer? And oh by the way, who is Angus Smith to her?

Let's back up a bit:

When a Texas oil millionaire named Rittenbacker and his curvaceous niece and young nephew rent a Madrigal villa, they settle in to contribute to the local tourist economy and soak up the determinedly quaint Spanish atmosphere. In turn, of course, they become objects of local gossip and speculation - especially when the niece, Mary Lou, shows up on the local beach wearing a bikini.

Rittenbacker, it turns out, is intent on buying some 'art masterpieces' newly discovered by the aforementioned Don Fernando, Madrigal's rather peculiar arts and antiques dealer. As Juan Llorca says: His "... shop is called the Bricum-ad-Bracum, which is, I'm told, Latin for junk.

Even so, Don Fernando and his Dona Carmen (a disreputable toothless lady with a roving eye), do a raging good business discovering long lost masterpieces hidden under a rock or two here and there. Juan Llorca is aware that the Texas oil millionaire is probably going to be fleeced, but he tries to be diplomatic about it, not wanting to come out and actually accuse one of the town's more well-known and indulged eccentrics. Besides, Rittenbacker is old enough to take care of himself.

In the meantime, there is the nagging question of Angus Smith, a tall good-looking sort with a sneer and an attitude. He has shown up in Madrigal and immediately assumed an annoying proprietary air over Julia Fairfax. Obviously these two know each other. Is he the absent hubby?

When the body of the Texas millionaire turns up dead, the natural conclusion that Smith (having been found to be a vile blackmailer) is the perp seems rather convenient. Maybe too convenient. It's then up to Juan Llorca to get at the truth of the sordid matter before the approaching Fiesta of the Moros and Cristianos (Moors and Christians) - which usually culminates in a 'pretend' battle involving the entire town of Madrigal del Mar - forges ahead and helps a murderer escape justice in the ensuing melee.

Just when you think you more or less know what's going on, turns out you don't. Delano Ames holds back a couple of surprises until the very end - just as it should be.

This is not Dagobert and Jane Brown, but on the whole, not a bad mystery with as engaging a leading man as you could want - even if he does have to wear a black patent leather tricorn.

The reader also gets to learn a bit about Spanish law, police proceedings, investigations and other esoteric minutiae. If I can find another Juan Llorca mystery, I will definitely be reading it.

George Kelley is doing 'link duty' this week, so don't forget to check in to see what other Forgotten Books other bloggers are talking about today.