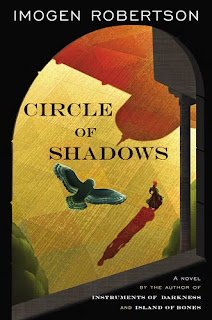 England, 1784. Harriet Westerman is an adventurous well-to-do widow, mother and detecting enthusiast. She and her companion Gabriel Crowther, anatomist, forensic specialist and reclusive but wealthy older gentleman (he has spurned his family title), are off to the Duchy of Maulsberg.
CIRCLE OF SHADOWS is the unlikely duo's first foray into crime solving on the Continent, having heretofore concentrated on crimes closer to home.

Westerman and Crowther are the stars of a historical mystery series which in my view, rises head and shoulders above most others for these fairly simple reasons: the author's writing talent, sleight of hand research ability and gift for vivid characterization and plotting. The series is four books along - at least in this country, though I understand that the schedule here lags behind the British pub. dates. My local library doesn't even have the entire series on their shelves.

Additionally, these are the only mysteries I've read which are set during England's Georgian era. That adds to their uniqueness. But this wouldn't have been enough to get me interested in reading these books if the writing weren't so damned good. There are many popular historical mysteries which just, for one reason or another, don't hold my interest no matter how many times I've attempted to read them (mostly due to friends' recommendations), but Imogen Robertson fixed my attention from the first paragraph in her first book and I've been hooked ever since.

Now for a brief interruption:

1) Location. Location. Location. As a reader (which makes me a kind of time traveler) I must WANT to travel back to where the mystery is. It's up to the writer to make this happen. And usually, it must happen quickly. If it's England, we're already a couple of steps ahead of the game.

2) Very important: The dialogue should not be anachronistic in tone, it must sound as if people of a particular time are speaking though not to the point where it becomes pedantic. The writer is speaking to a modern ear after all.

3) If a specific actual event, place, person or thing is used in the story, the dates must be accurate unless we've been informed beforehand that the author switched things around for some purpose. However, that purpose must make some sort of sense. This applies too if the writer is including characters created by another author and transplanted.

4) The writing style of a historical mystery should appear - in sentence cadence, for instance - not only as if it were knowledgeably written, keeping the era in mind, but also as if it were effortless. The behind the scenes nuts and bolts of research should not be apparent and obviously, the work should be approachable enough so that the modern reader/mystery-lover/history maven, can jump right in. Above all, it must NEVER be written in the present tense. In fact, nothing should ever be written in the present tense except maybe blog posts. (I'm guilty of that.)

I admit that I might have read one or two books written in present tense - but only rarely, in my opinion, does it ever work. The talent must be prodigious. There should be a reason for telling a story in this way, not merely the fashion of the moment. I have never read a historical novel written in the present tense and probably never will.

5) When it comes to history I'd always assumed that everyone shared my enthusiasm. (History was my favorite topic in school.) But to my consternation I've found that this is not always so. I know, the mind boggles.

Obviously you don't have to be a historian to read a book set in the past. But the truth is that there are always things it helps to know (even just generally) or at least have an interest in - points of reference and whatnot - the more you know, the quicker you can acclimate. I don't want a history lesson while I'm reading a mystery. (I read non-fiction for that.) I want the author to assume that I know a little something about the era, the setting or the events or else I wouldn't be there. The thing must be, first and foremost, a murder mystery.

Those are my rules and by gum they've always worked for me. Yeah, I know, I know, rules are meant to be broken. But when it comes to historical mysteries I can be pretty strict. I want a comfortable but intriguing setting. I want wonderful characters. I want suspense. I want mystery. I want knowledgeable writing. That's about it.

Author Imogen Robertson meets all of my criteria.

Okay, back to CIRCLE OF SHADOWS:

The Duchy of Maulsberg is a small German state roiling with poisonous intrigue, spies and more than its fair share of shadowy behind the scenes political chicanery. What's more, Maulsberg is currently preparing to celebrate the up-coming betrothal of their duke to a princess of a neighboring state. The marriage is to be a typical if formidable combo of lands and power - though the Duke brings rather less to the mix than is commonly known. But amid the pomp and circumstance, there are first some very nasty murders to be dealt with. The authorities, naturally enough, are eager to quell speculation, sweep the matter under the rug and quickly hang the most likely suspect.

Unfortunately, the most likely suspect this time is Daniel Clode, the brother-in-law of intrepid sleuth Harriet Westerman. An attorney and agent of the Earl of Sussex who happens to hold Duchy of Maulsberg bonds, newlywed Daniel had been traveling abroad with his wife, Harriet's younger sister Rachel.

During a masquerade ball at the castle, Daniel, raving incoherently, was found in a locked room with his wrists cut. Also in the room, the dead body of the Duke's current mistress. Daniel doesn't remember anything about the crime or even how he came to be in the room. It's obvious he has been drugged. But how gratifying for the Duke's investigators to have a foreigner conveniently on hand to blame for the murder.

When Harriet, back in England, receives a hysterical letter from her sister, she and Gabriel Crowther must travel to the continent to save the condemned Daniel and, as it turns out, solve several horrific murders in the process. While in Maulsberg hobnobbing with the German aristocracy, Harriet once more crosses paths with the diabolically clever spymaster Manzerotti, this time a special 'guest' of the Duke of Maulsberg. Manzerotti is a famed castrato opera singer renowned for his physical beauty as well as his magnificent voice. He is also the man Harriet blames for her husband's death.

Unexpectedly forced to work with her nemesis, Harriet and Crowther are swept up in court intrigue at an especially 'iffy' time when even the hint of scandal could put the kabosh on a very beneficial state marriage. Murder can hardly be allowed to interfere with matters of this monumental importance. Therefore the investigation must be carried out in a hush-hush sort of way - nothing new for Westerman and Crowther.

Question: How was it possible for the duke's mistress to drown inside the castle, in a dry locked room?

Ah, my friends, this is one of many questions which will be answered as Westerman and Crowther's investigation turns up more grisly deaths - deaths which have passed for 'accidents' - gone unnoticed as murder.

Author Imogen Robertson has peopled this particular book with an especially interesting group of characters. Besides the Duke (who is apparently more than just another aristocratic flounce) and the mysterious castrato, we are also introduced to a set of ruthless spies, some 'pie in the sky' revolutionaries, a mad alchemist or two, and an Arab duo who excel at creating incredible automatons of great beauty. There is more than enough court intrigue, deadly secrets and chicanery to sweep everyone up, especially those not quick-witted enough to step nimbly out of the way.

By the time the truth is known (much of it unpalatable) Harriet Westerman and her friend Gabriel Crowther are more than ready to congratulate the Duke and head back to England, relatives and friends in tow, ready for whatever new mystery awaits them.