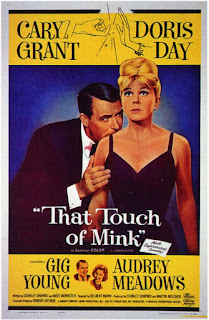 THAT TOUCH OF MINK (1962) is a film directed by Delbert Mann, starring Cary Grant, Doris Day, Gig Young and Audrey Meadows. I consider it one of Day's 'perpetual virgin' entries and as such, should be viewed through that prism.

That this movie was made a little over fifty years ago (yegads that reads like ancient history) is obvious from the fashions, the Pan American Airways planes, the Greyhound bus logo and most of all, the Horn and Hardart Automat restaurant where the wise-cracking Audrey Meadows (Doris Day's room-mate) works. Ah, the 'rock-solid' symbols of the good old days.

But more telling than any of the fondly remembered product placements (though Greyhound, at least, is still with us) are the social attitudes, the sexist drivel which is at the heart of this movie. There's a lot of nonsense spoken by Doris Day and Audrey Meadows, not to mention, Cary Grant and assorted others.

But as I watched this last night, occasionally cringing, I found myself laughing out loud (and being embarrassed the neighbors might hear) at some key scenes I'd forgotten about. (Yes, I saw this in theaters and loved it then. What did I know?) 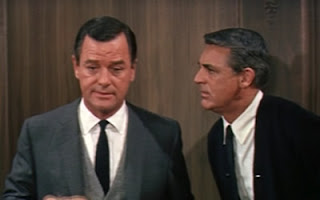 Most of these laugh-out-loud scenes are Gig Young's doing since he steals the picture from under everyone's noses (and doesn't Grant realize it). If there's any real reason to see this ancient bit of male/female will-she-won't-she, it's Gig Young, an underrated actor with one of the sweetest smiles ever recorded by a camera. Though his personal life was tortured in a way that led to eventual tragedy, his on-screen persona was generally damned endearing.

His Oscar win however, was for a 'straight' dramatic role, the sleazy dance marathon emcee in THEY SHOOT HORSES, DON'T THEY? Young was adept at drama, but it's his comedy performances that I remember most with fondness.

In THAT TOUCH OF MINK, Young plays a perpetually hapless guy (his specialty) named Roger, an ex-academic who has, according to him, succumbed to the lure of an exorbitant salary ($50,000 - chickenfeed today, but back then seen as Big Bucks) and continued bonuses offered him by investment tycoon Philip Shayne (Cary Grant), which Roger is unable to turn down.

In his job as company right hand man to the suave Shayne, Roger is continuously maligning the life he is unable to walk away from as Shayne threatens to raise his salary. These bits are amusing and often seem ad-libbed.

Cary Grant plays the aforementioned suave millionaire (back when millions was important money) in an unusually deadpan way which makes him seem miles away while filming. It's a bit hard to understand why he is so taken with Doris Day's character, Cathy Timberlake.

It's all probably meant to be a kind of 'opposites attract' type thing, but there is not one iota of sexual energy being discharged by anyone in this film, not even by the sleazy, slimy, reptilian and repulsive unemployment insurance clerk Everett Beasley who has the unacceptable hots for Cathy (Doris Day). Beasley is played by John Astin, a very odd looking actor with, nevertheless, hidden suave, who later went on to prove it by starring as Gomez Addams in The Addams Family television series. 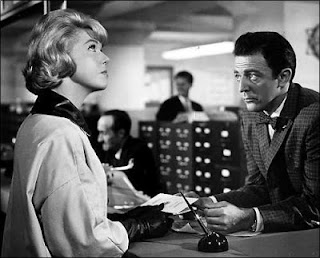 In truth, Grant and Astin (so diametrically opposite in looks and manner) occupy two sides of the same coin. Grant's character is rich beyond avarice, handsome, suave and looks good taking a shower or running out into the street wrapped in nothing but a towel. 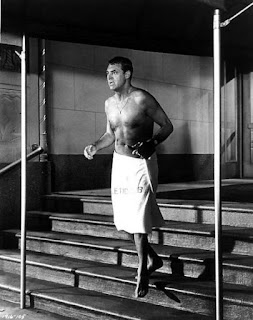 He is after Cathy Timberlake in the same way and for the same reason as Beasley, but Grant does it with finesse, splendid good looks and a mink coat. Beasley does it with protruding hungry eyes and by trying to withhold Cathy's unemployment check unless she goes out with him. He simply cannot hide (as Grant can) the lascivious thoughts running rampant through his psyche when he looks at Doris.

It's that either/or thing so beloved of movies of that era. 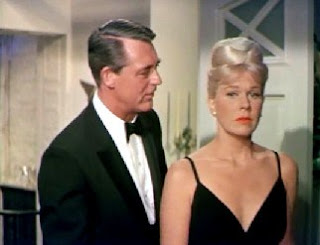 Anyway, on to Doris Day. I was never really crazy about the Rock Hudson/Doris Day pairings  beloved by many movie mavens. I preferred her with David Niven in PLEASE DON'T EAT THE DAISIES among other films, and even here, in this ancient chestnut opposite Cary Grant.

Day had a sweetly spunky (and very blond) screen persona which she played to the hilt and could often be endearing and quirky (she was also a talented singer though she is not called upon to do so here).

But you know, she really was a bit too old to keep playing the perpetual virgin as long as she did. In  THAT TOUCH OF MINK she is, again, protecting her virginity, this time from Cary Grant's rather tired playboy persona. Doris is, however, fabulous at physical comedy and has a couple of really hilarious scenes with Grant even if it's hard to believe he has designs on her person at all. (Although she does look mighty good in a sleek black evening gown.)

Cathy Timberlake (Doris Day) is an unemployed clerk from Upper Sandusky, Ohio, who first meets debonair millionaire Philip Shayne (Cary Grant) when his limo has a drive-by encounter with her clothing on a rainy day in New York. That innocent enough beginning soon leads to romantic complications, several unconsummated trips to Bermuda plus this that and the other including a wild taxi drive chase to Asbury Park, New Jersey (of all places). 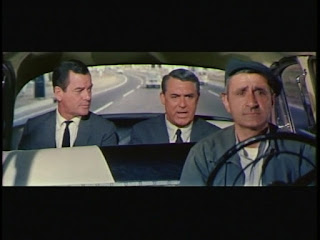 It's all an excuse for several very funny sight gags (one concerning Gig Young's attempted visit to Cathy's Manhattan apartment) and some fun dialogue between Grant and Young. Not to mention Young's dialogue with his psychiatrist who mistakenly gets that impression that...But wait, you have to see these scenes to believe them.

Audrey Meadows, as Cathy's room-mate Connie, has the sort of cynical, wise-cracking lines that are clearly meant to be funny (and maybe once upon a time, they were) but in hindsight, are anything but. She plays a nagging mother hen leery of men in general but at heart, we know, anxious to fashion her own happily ever after. The only problem is that she's not really likable. 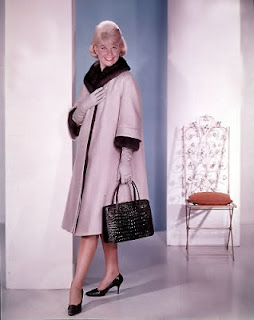 An aside: THAT TOUCH OF MINK always made me wonder why a woman needed a mink coat while traveling in Bermuda. I mean, isn't it hot there? But why digress, the mink is obviously meant as a symbol of decadence - The Purchase Price. I mean, if not marriage, then mink was the next best thing.

Dumb and simplistic. Yeah, but that's the way things worked back in the day. Though I still say that Doris Day and Audrey Meadows were both a bit long in the tooth to be worrying about this sort of thing even then.

The movie is worth watching mainly for Gig Young (I might even watch it yet again) and I did love the sight of that Pan American plane headed to Bermuda. I guess I never did understand how companies like Pan America and Horn and Hardart lost their way. They seemed such a permanent part of life back then.

THAT TOUCH OF MINK trailer can be viewed here.

Don't forget to head on over to Todd Mason's blog, Sweet Freedom, to see what other Overlooked (or Forgotten) Films and/or Other Audio/Visuals, other bloggers are talking about today. We make for an eclectic bunch.