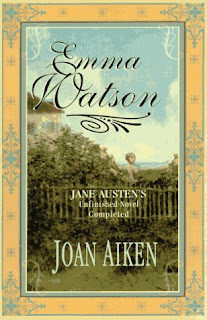 Jane Austen left behind two unfinished manuscripts: THE WATSONS and SANDITON. Both works have been finished and published over the years, other authors taking up the stories and continuing them ala Austen with varying degrees of success. After all, who can replace or replicate a genius? Especially such a finely tuned one.

I hadn't read any of the Austen 'continuations' until the name of Joan Aiken entered the mix and knowing of Aiken's finesse with words, I decided to see what she'd made of THE WATSONS. This was a novel begun by Austen in 1803(or 04) and abandoned after only about 1700 words.

The other novel, SANDITON (originally titled THE BROTHERS), begun in 1817, was cut short by the author's illness and untimely death at the age of 41 in that same year.

EMMA WATSON (the book, not the Harry Potter actress) as completed by novelist Joan Aiken (author of - among many, many other books - THE WOLVES OF WILLOUGHBY CHASE and the even better, MIDWINTER NIGHTINGALE) and published in 1996, is a fascinating return to early 19th century England. The Regency era, years known for their strict and convoluted social conventions and rigid class divisions. Not to mention the antiquated and unfair laws of property and entailment which excluded women, keeping them bound to the males in their household either by marriage or family connection no matter how distant.

Austen herself used sly satire and wit to carefully pick apart the foolishness and injustice of her era, but only to the point where most casual readers would not take any real offence. Her books on the surface are mannered romances, but underneath may be found some rather pointed observances of English country life, actually of 'life' in general. Even within the strictures of the sheltered society she inhabited with her not very well-to-do family, Austen was able to draw sharp inferences and connect all the relevant dots.

How property and sex were bound together to the mutual benefit of a male dominated society which disguised any unjust behavior with regal manners and the myth of good 'breeding' was forage for a woman who had a very keen sense of observation and acute deductive reasoning.

The fact that what was true in her day may, on many levels, still be true today is part of the reason we so cherish Austen's writing. Human nature never really changes. It is what it is. Somehow, Jane Austen knew that.

I'm not quite clear which part of the WATSON novel is all Austen or for that matter, which part is all Aiken. Primarily because I've never read the original - I'm looking forward to doing that sometime soon. I'm assuming that Aiken her own sort of weaving method to flesh out the story and make heads and/or tails of the various relationships.

Aiken is no Austen (well, who is?) but she has a knack for embroidering a story. So much so that I stayed up all night reading EMMA WATSON. Near the end I still wondered what it was about the story that held my attention. If you asked me to pinpoint, I don't think I could. That's the way of it with Austen, she grips you and you're not sure exactly why or how.

Mr. Watson is a widowed clergyman with two sons and four daughters. The youngest daughter, Emma, has been brought up by a wealthy aunt and is consequently better educated and more refined than her sisters. But when her aunt contracts a foolish second marriage, Emma is obliged to return to her father's house. There she is chagrined by the crude and reckless husband-hunting of two of her sisters. She finds the kindness of her eldest and most responsible sister, Elizabeth, more attractive.

Living near the Watsons are the Osbornes, a great titled family. Emma attracts some notice from the boorish and awkward young Lord Osborne, while one of her sisters pursues Lord Osborne's arrogant, social-climbing friend, Tom Musgrave. Various minor characters provide potential matches for Emma's brothers and sisters.
Mr. Watson is seriously ill in the opening chapters, and Austen confided in her sister Cassandra that he was to die in the course of the work. Emma was to decline a marriage proposal from Lord Osborne, and was eventually to marry Osborne's virtuous former tutor, Mr. Howard.

Joan Aiken takes these characters and I'm assuming, all of the 1700 words left by Austen, and fleshes out her own version of what might have happened to the Watsons and the Osbornes and their neighbors.

In Aiken's hands, there are several new characters introduced (an assumption on my part), among them a sea captain who falls instantly in love with Emma and she with him, but who is bound by duty to return to sea until who knows when. Will he and Emma ever get together? Stay tuned.

The hapless curate Mr. Howard (who according to Austen was destined to marry Emma in the end) is not at all the sort of man a spunky Austen heroine should marry. (I'm glad Aiken realized that.) He is embroiled in a relationship (chaste of course) with the older Lady Osborne, a widow with money who is flattered and not above 'using' the attentions of the young man to her own advantage. The handsome Mr. Howard is poor and needy and fooling nobody, but a man's gotta' do what a man's gotta' do to get by in Regency England.

At the age of 25 or so, Emma is considered too old to be seriously contemplating marriage at any rate. I mean, who would have her? The fact is that she will be expected to live with an older sibling, serving the role of the poor relation so beloved of novelists of that era. The rectory is not the family's in perpetuity and soon as the father is no more, the Watson women are expected to immediately depart the premises.

Emma's plight is not helped by the fact that her unkind and rather unfeeling older brother is married to a grasping, foolish, money-hungry woman with no tact and little familial affection. So no help to be had from that quarter. Emma's younger brother, a kindly, intelligent young man is a poor and struggling student. Emma can not count on him.

Emma's two sisters are eager to marry but respectable men (with a living or property) are in short supply. The two eligible men in the neighborhood (supposing Howard is already taken) are painted by Aiken (or Austen) in a rather unattractive light. In fact, one has caused the tragic accidental death of Emma's only real friend.

In the meantime, Emma is apparently expected to act as the sisters' drudge since servants are few and money almost non-existent. Emma, having returned to the bosom of her family after many years absence (see notes above) is willing to do what's necessary to maintain peace in the household - mainly to keep her sickly father from becoming unnecessarily upset and to keep her sisters from behaving badly.

This early part of this story showcases how unmarried women without money or property or helpful connections were often destined to lead unhappy lives at the whim of their relations. (Something Austen was particularly fond of writing about.) How Aiken manages to keep Emma from this fate is intriguing if a bit un-likely. Hint: it has something to do with sewing and later when someone from her past shows up unexpectedly, with horses. And don't forget about that sea captain sailing the seven seas...

The book isn't very long (221 pages) and I wish Aiken had developed parts of the story in a more expansive manner, but still I couldn't put the thing down and read it in one night, eager to find out what would happen next.

In the end, rather abruptly, we get a postscript which details the various marriages and what happened to whom and how. Oh what the heck, I love a good postscript.

Don't forget to check in at Patti Abbott's blog, Pattinase, to see what other forgotten or overlooked books other bloggers are talking about today.

It's Elmore Leonard Day at Patti's, but I went in a different direction.