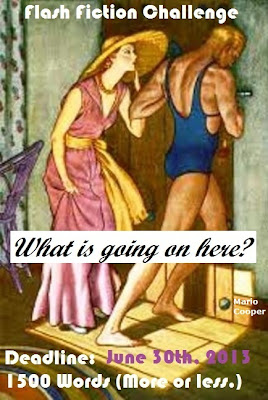 Some of you may have missed this alert the first time around. (Maybe I should have added a trumpet blast!?) I'm posting it again in the hopes that a couple more brave souls might join the challenge. Right now it looks as if there will only be two of us. No matter what, though, I'll still be writing mine up.

Yes, it's time for another of our infrequent fan-fiction debacles...uh, delights. (I really ought to have more than one a year, but life just gets away from me, especially these days.)

I have my blog friend Kathy to thank for urging me on almost since the moment she first saw my new (at least for the summer months) header design. The artwork by the wonderful Mario Cooper naturally gives rise to speculation so I've decided that we should do just that - speculate - in 1500 words.

What is going on in Cooper's artwork? (Never mind it's original intention.) What is happening that that nicely muscled blond man in a bathing suit has to lock the door with such ferocity? Is he in the process of barricading it? Or is the lock just stuck and he's trying to pry it open while, perhaps, showing off his muscular...uh, magnificence? (It never hurts to advertise.) Is he trying to let someone in or keep someone out? Or is he, despite his heroic good looks, just a Lothario trying to keep the worried Miss in the nice outfit and stylish hat from leaving?

You decide. You invent. You decipher. In 1500 words (more or less, I'm not a very strict taskmaster).

We'll have until Sunday, June 30th, so that gives us plenty of time. On that date you can post your stories and I'll pick up the links and include them here along with my own story. So that means YOU MUST LET ME KNOW in advance if you'll be participating. If you don't have a blog, then post your story in 'comments'. We're flexible around here.

So, think it over (well, really, what's to think - you know you want to do it), and let me know as soon as you've made up your mind. Use your imagination.Write whatever you like, however you like, in any style you like just so long as it answers the question: What is going on here?

P.S. I would much appreciate if you would pick up the 'badge' and place it somewhere on your blog. Let's not keep it a secret that we're about to have some fun around here.


*******************
In the meantime, I'm also planning for our very own Georgette Heyer Blogathon (you know how much I love her work), so keep that in mind as well. It won't be until later in the summer - August 16th is the 111th anniversary of Heyer's birth - but you can certainly begin your reading now so you won't have any excuse not to join in later when it all becomes official. I'll have a badge and more info up after we finish with the Flash-Fiction Challenge.