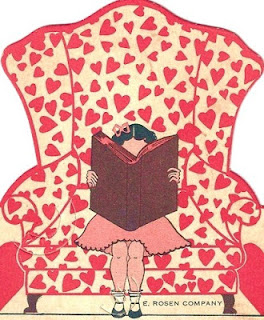 For those of you - like me - who keep track of this sort of thing, it probably doesn't seem as if I'm reading a lot of books this year but the bitter truth is that lots of what I'm reading, I'm not finishing. If I don't finish a book I can't list it as read - right? So round and round I go.

Either I'm getting more particular or the books I'm picking up and tossing aside after a few pages are becoming more the norm. I'd hate to think that's the case.

Maybe this restlessness is the reason I've been doing a lot of re-reading lately. You can hardly go wrong re-visiting old tried and true friends.

Books tend to come and go around here at a very rapid pace, some I review, most I don't - even if I enjoyed what I read. No rhyme or reason. But the truth is that a lot of books don't make it past the initial 50 page criteria. Those are usually set aside with a sneer and roll of the eyes, occasionally with a sad shake of the head. I can be merciless.

You know I rarely dis books on this blog, it's not my thing. Generally if I dislike a book I just quietly swallow my disappointment, return it to the library and move on. But sometimes the disappointment lingers longer than usual and I feel the need to vent.

Two books that really rankled this year were recommended on various sites and I suppose that led me astray. Hey, I didn't say I was perfect.

One: MR. PENUMBRA'S 24 HOUR BOOKSTORE by Robin Sloan seemed to hold a lot of promise. I guess I expected a kind of magical/realism thing, a 'genre' I'm always willing to love and indulge just a bit. I suppose that's why Sloan's book is the most disappointing (he is the better writer). It reads as if it couldn't quite make up its mind what it wanted to be.

The first half of MR PENUMBRA is brilliant and inventive and intriguing and everything I hoped it would be. The characters are likable, even the quirky girl who works for Google. But the second half (except for the idea of the collapsible 'cardboard scanner) fails to deliver.

You can see it coming and yet you hope against hope that maybe... But in general, I had the feeling that the author couldn't figure out how to connect the dots. However, the book doesn't qualify as unread since I did finish it (okay, skipping a few pages here and there), despite my natural inclination. Sloan is a terrific writer, I could tell that from the first, but I think this just got away from him. Foolishly, I kept hoping for something wonderful even up until the last couple of pages.

(I notice that both books I'm venting about were written by a person named Robin. Just a coincidence, folks.)

The second book, JANE The Woman Who Loved Tarzan by Robin Maxwell did sound as if it would be a lot of fun. Haven't you Tarzan aficionados (of which I am an utterly devoted one) ever wondered about the Tarzan story from Jane's point of view? I mean, it's a great idea.

Even so, at first I resisted, since everything wonderful about Tarzan is ingrained in my psyche from the Johnny Weissmuller films I watched over and over when I was a kid. (Heck, I still watch.) And I know that the 'real' Tarzan of the Edgar Rice Burroughs books was a totally different sort of chap from the film's incarnation. Yet somehow I've managed to reconcile two improbables into one heroic, loin-clothed ideal. Ideals are hard to live up to and maybe that's my problem. Maybe I expected too much.

Robin Maxwell's book features Edgar Rice Burroughs as himself - a writer looking for a good story to write. A very nice shtick. It passed the first fifty pages test (though the somewhat stolid writing troubled me a bit) and I kept on reading just to see if Jane's side of it would add something new and interesting to the mix.

But here's the problem in a nutshell: as fashioned by Robin Maxwell, Jane just isn't very likable. In fact, she seems rather ghoulish, especially when we come across her calmly dissecting a dead body alongside her father the professor. She has a lot to prove. Being the only woman in a room full of male students doesn't dampen her spirits one single bit.

Jane is a born heroine, a gal meant for great adventures. She is undaunted in her drive to prove herself in a world of male domination, a budding scientist who, with her father, will travel into the heart of deepest Africa to search for Darwin's 'missing link'.

Okay. But couldn't we like her just a little bit in the meantime?

What bothered me most about all this is that not one of the characters we meet along the way, not even Tarzan, has any living, breathing warmth. Tarzan seems more like a phantom than a real human being (not that this is necessarily a bad thing, but here it doesn't work).

Tarzan comes equipped with all his Edgar Rice Burroughs created idiosyncrasies (which is just as it should be), so in a way, this hamstrings the author. But I also thought affection for the character would have inspired some wonderful riffs. But alas, it was not to be.

Maxwell does mention Tarzan and Jane's sexual urges (something I'm not sure Burroughs ever did) - will they or won't they? did he or didn't he? - are questions answered soon enough. I suppose that's part of the problem in this version of the story: some things are better left to the imagination.

Tarzan is a living myth. I don't really want to know about his bodily functions. Or Jane's, for that matter. I don't care if Jane has a anthropologist's eye for this sort of detail. Too much information!

There is one long, boring and rather silly sequence (accompanied by drums) set among a tribe of African natives which serves no real purpose except to let us see that Jane and Tarzan have the hots for each other. (In case we didn't know.) This leads to a mundane sexual confrontation inside a native hut. Ho-hum.

Oh, and one more thing: the villain (packing a Gatling gun on a scientific expedition - sometimes you just have to shake your head) is a guy straight from Bad-Guys-Are-Us. He reminded me of Bluto from the Popeye stories. I can't help it. That's who sprang to mind. And even this I wouldn't have minded if only the book had a sense of humor.

I finally gave up.

Okay I promise, no more negativity for awhile.