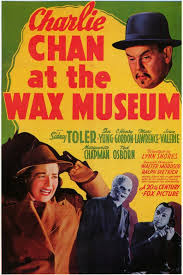 Though Warner Oland is my preferred Charlie Chan of choice, I still harbor a not-so-secret liking for Sidney Toler in the part. Toler plays Chan in a several of my favorite movies in the series so it's hard for me to discount him (as some do), so I won't. But Keye Luke will always be my very favorite son of Chan. Okay, okay, Victor Sen Yung is a close second.

CHARLIE CHAN AT THE WAX MUSEUM (1940) is a film directed by Lynn Shores and written by John Larkin (original screenplay) based on characters created by Earl Derr Biggers. It stars the aforementioned Sidney Toler as the brilliant detective Charlie Chan and Victor Sen Yung as Jimmy Chan, the great detective's not-so-brilliant son.

This time out, as usual, the plot makes little sense, but hey, as I like to say: if you want sense then these are not the movies for you. It's only if we want comfort-food entertainment that we turn to these old familiar chestnuts. (Though maybe no so familiar to some of you. Tsk. Tsk.) I never get tired of watching my favorites in the Charlie Chan series so I am speaking to you as an enthusiastic fan and will brook no opposition. Ha!

CHARLIE CHAN AT THE WAX MUSEUM begins in a courtroom where nasty, hatchet-faced convicted killer Steve McBirney (the always reliably evil Marc Lawrence) is about to be sentenced to the electric chair. Charlie Chan was the chief contributor to McBirney's conviction and he is in the courtroom as well and earns a threat from the unrepentant McBirney who vows to get his revenge. Uh-oh.

Sure enough, as McBirney is being led out of the courtroom a gun battle ensues and McBirney escapes with the help of his cohort and henchman, the usual weasely, brainless type that these guys always seem to have in reserve. 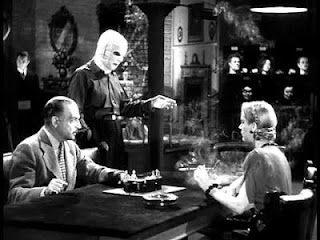 Despite a city-wide hunt for the escaped cop-killer, McBirney later turns up (after closing hours) at Dr. Cream's Wax Museum of Crime downtown near the docks - a museum filled with scary exhibits of famous criminals and their crimes. There McBirney will receive plastic surgery (to make him unrecognizable) performed by the sinister Dr. Cream (C. Henry Gordon) who is apparently well-known in crime circles for providing this service, conveniently, in the secret basement surgery of his museum.

McBirney (wrapped in bandages) will then hide out at the museum until his face heals much to the consternation of the good Dr. Cream and his hench-woman, Lily (Joan Valerie) who would rather not be dealing with the crazed McBirney at all. But crime makes for strange bedfellows and so... 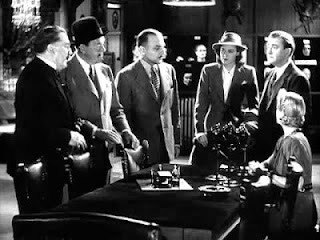 In the meantime, Chan is goaded into taking part in a hammy true crime radio performance which each week outlines a famous crime from the past. That particular week the show is being broadcast from....wait for it, wait for it - Dr. Cream's Wax Museum of Crime. Neat how these things come together.

It is on a dark and stormy night (naturally) in which all these elements have fused to make for murder most foul at the wax museum. The program for the evening is the long ago locked room murder which resulted in the conviction and execution of Joe Rocke, an innocent man. Rocke was tried and convicted for a crime rightly committed by a killer who Chan suspects had his face 'changed' by Dr. Cream (uh-oh) and who might, even now, be lurking at the museum in the guise of...well, anyone. 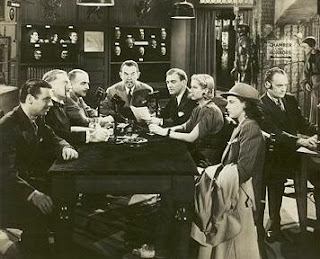 As the radio crew sets up the broadcast which includes among the guests, a famed German criminologist (a braggart whose faulty evidence convicted Joe Rocke to begin with) and an eager lady-reporter of the 1940's type and uninvited, a smart-mouthed lawyer who later gets to ask the reporter for a date. Jimmy Chan (Victor Sen Yung) shows up, of course, also uninvited, but ready to lend his famous father a not-always-so-helping-hand. At any rate, lo and behold, in the middle of the broadcast the criminologist is electrocuted by a handy-dandy little wire hook-up - a trap originally meant for Chan. 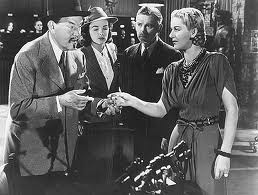 Thereafter a couple of other murders ensue and what with all the doors locked and the telephone lines down, the lights going on and off, and oh yes, a terrible thunderstorm, it all makes for a nicely lurid murder mystery with lots of creeping about among the dark shadows and even, lurking among the exhibits, the rather odd widow of Joe Rocke who shows up just as the museum is closing for the night. An entertaining way to spend an evening if you're in the mind for a nicely comfortable murder and mayhem story with a dandy ending and a very familiar cast of characters all doing their shtick. Most especially the wonderfully mean-faced Marc Lawrence, a terrific character actor who specialized in playing hoods his entire career and was one of those actors (a very select group) who practically lived forever, passing away at the age of 95 in Palm Springs, California just a few years ago. 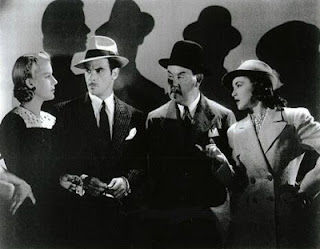 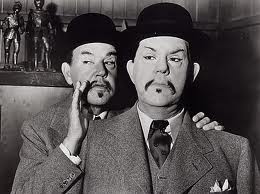 Last but not least, do not forget to check in at Todd Mason's blog, Sweet Freedom, to see what other overlooked or forgotten films and/or other visuals, other bloggers are talking about today. It's a mouthful, I know, but never mind, just do it - you will be rewarded.