Not so much forgotten as maybe overlooked: BREAKFAST AT MADELINE'S (1999) - A Jacob Burns Mystery by Matt Witten 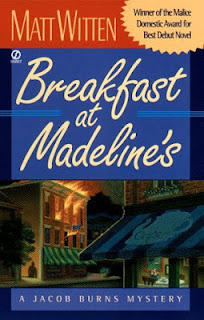 Now and then you get something for nothing and it turns out to be a pretty good thing. That was the case when I downloaded Matt Witten's mystery, BREAKFAST AT MADELINE'S free from Amazon a few weeks ago.

I like to think I'm pretty good at sizing up a guy's writing from the first page so when I read that page online I saw almost immediately that Witten was my kind of writer. And after all, they were giving the book away at the time (now it's back to its 2.99 Kindle price which, far as I'm concerned, is still a bargain). The book, first in a series featuring lead character Jacob Burns, is also available in paperback.

Even though I'm not fond of reading off my computer, I was hooked by the author's catchy way with words and the easy way he has of telling a story. It's a cozy sort of thing, the setting is the smallish town of Saratoga Springs, New York (though it hardly resembles the Saratoga I visited some years ago which seemed to me a busier and more active place than Witten's Saratoga) and the characters all live locally, know each other and seem to meet every day at Madeline's for Ethiopian and/or other esoteric cups of coffee.

Jacob Burns is a very likable protagonist. He is a writer who, through happy happenstance, was hired to adapt a  screenplay (about gas fumes rising up out of the earth to destroy San Francisco) soon to be made into a Hollywood extravaganza. For this this he was paid a small mint (750,000 take-home, which in today's money is not HUGE, but still a nice chunk of change). Not sure if he wants to turn into another Hollywood Hack, Jacob has serious doubts about his abilities and is currently afflicted with writer's block.

He is happily married (but that doesn't stop him having lascivious thoughts about the curvy help down at Madeline's and almost falling victim to a coffee-shop seductress) with two young boys and a wife who works in a school in the next town over. The whole family dynamic is delightful without being over coy.  The charming interaction between father and sons is believable and occasionally very funny. I love the way that Jacob isn't afraid to call his boys 'honey' when speaking to them. It's sweet and believable and yes, dare I say it, adorable. In a very good way.

But wait, this is a tale of murder and chicanery - right?

One morning as Jacob is finishing his coffee at Madeline's, a man drops dead right in front of him. Literally. The man is Donald Penn, a scruffy down and out town character, a failed writer usually seen scribbling on bits and pieces of paper at Madeline's while drinking his ritual cup of Ethiopian.

As Penn collapses, he throws Jacob an object which turns out to be a key to a safety deposit box at the bank. After that puzzling event, Jacob is drawn immediately into a local mystery involving murder, blackmail, breaking and entering (something which Jacob quickly develops a talent for) and the burning down of a local Arts Council office. Who knew that that would-be artists could be so underhanded and sleazy, not to mention, violent? Who knew that an application for an arts' grant could lead to murder?

Though the mystery isn't as involving as it could be and the solution far-fetched, Jacob's family inter-action as well as his frenetic midnight escapades around town hunting for clues, make for mighty fun reading. He is just a charming guy, someone you want to spend time with - that's half the battle in these sorts of books. I enjoyed Jacob's tenaciousness, his single-minded search for the truth and his way of rationalizing the more outrageous of his flights of investigative fancy, i.e. robbing the local bank.

There are two other Jacob Burns books, GRAND DELUSION and THE KILLING BEE. I'll definitely be reading them.

P.S. Found out from the author that the second book in the series, GRAND DELUSION is available for free download from Amazon until Thursday of this week. I've already got mine.

To see what other Forgotten or Overlooked Books other bloggers are talking about today, don't forget to check in at Todd Mason's blog, Sweet Freedom for all the relevant links.
Posted by Yvette at 12:27 PM