I don't know how I missed this little gem the first time around, but I'm so glad I finally saw it this past week. I love Walter Matthau (even with his hairy ears), most especially when he plays the smartest person in the room with that sly twinkle in his eye.

HOPSCOTCH (1980) is a film directed by Ronald Neame, written by Brian Garfield (based on his book) and Bryan Forbes and starring not only Walter Matthau but the wonderful (not to mention, brilliant) Glenda Jackson and co-starring Sam Waterston, Ned Beatty and Herbert Lom. (Not bad - huh?) I am slowly beginning to think that the 80's spawned some pretty terrific movies. Even if the fashions were awful - though not as godawful as the 70's which were the bottom of an abyss as far as fashions go. But I digress.

Think of HOPSCOTCH as a geriatric Jason Bourne spy thriller without the memory loss, the physical beauty and super-human prowess, the shooting and killing and strangling, the electronic gadgetry and the lightning quick editing. So, what's left? 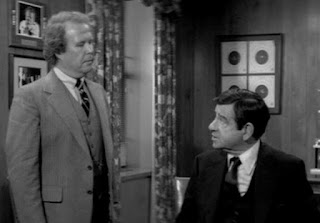 Upon his return to Washington from his most recent spy sojourn overseas, Kendig is demoted to a filing desk job by Myerson (Ned Beatty), his spiteful/hateful/incompetent boss who is also, as Kendig never tires of reminding him - short.

Sam Waterston, not as schmoey as he would appear in this scene.

Not only that but Kendig's assistant, Cutter (Sam Waterston), will now head the Overseas Section.

The boss doesn't like that Kendig allowed the head of the KGB (Yaskov, an old friend - Herbert Lom) to get away after Yaskov failed in his mission to steal a certain microfilm. Kendig explains that if he'd captured Yaskov, the KGB would only assign someone else. Someone new. Someone whom he might not know as well as he knows the current chief. "I know how he thinks," says Kendig. But Myerson is immune to intelligent subtlety.

Kendig will spend the rest of his tenure as a filing clerk.

So the first thing he does is nonchalantly stroll down to records and shred his entire personnel file. Then, rather than report to his new desk job, Kendig goes off to Salzburg to spend a little quality time with a widow lady.

Matthau and Glenda Jackson who can do nothing wrong in my book.

Kendig then decides, in a stroke of genius, to write his memoirs and reveal all the dirty secrets Washington (and Myerson, not to mention, the Russians and everyone else in authority) wants kept hidden.

In this endeavor, Kendig unites with Isobel (Glenda Jackson in a fetching short haircut) - a widow who lives in Salzburg and is used to Kendig's hijinks - she is ex-agency as well. She will help him in his plans to screw the CIA and live to tell about it though, admittedly, she thinks he's crazy.

A writer's work is never done.

It is obvious from the getgo that Kendig IS the smartest person in the room (and the best secret agent) at any given moment and knows it. After years of towing the official line (though in his own admittedly eccentric way), he is ready to pull off the biggest caper of his spying career. It's all revenge fantasy, but Kendig is just the guy to carry it off. You never doubt him even when things don't go completely as planned.

Once he begins writing the book he starts sending each finished chapter to Myerson in Washington and to the Russians and several other significant persons of interest. 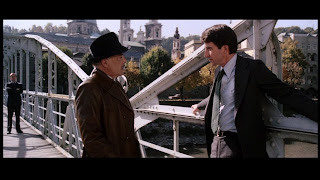 Myerson wants Kendig stopped or (preferably) taken out but Cutter (Sam Waterston) appears unconcerned. He realizes that Kendig is playing a game and that eventually he'll call it off. Cutter likes and admires Kendig, but still, at the end of the day he has a job to do.

The chase is on from Washington to Salzburg to London to Washington again, to Savannah, Georgia (in one of the funniest sequences in the movie) to Bermuda, to England again with Kendig always one step ahead of his former cohorts.

Oh what a wonderful cat and mouse game. The screenplay is not only funny but intelligent and witty with nary any of the regular spy movie cliches we've come to expect. The soundtrack is mostly Mozart with some Puccini and Giacomo Rossini thrown in for good measure.

One of my favorite scenes: Kendig crossing the border into Germany while singing (?) along (at the top of his lungs) to an aria from The Barber of Seville. The crossing guard is left shaking his head (crazy Americans) and no wonder.

If you love spy movies but not necessarily the lethal blood and guts that usually accompany them (believe me you won't miss it) and you love a great story with an intelligent cast of actors doing what they do best, line up HOPSCOTCH on your Netflix queue because it's currently available for streaming. Hooray! 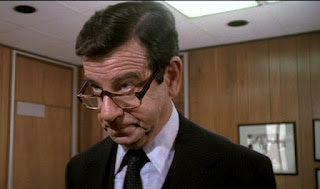 The interesting thing is that none of what Kendig gets away with would likely be possible today because of all the electronic tracking paraphernalia we are so accustomed to. But that's neither here not there, the movie takes place way back when and it works splendidly.

Oh, meant to mention that there's also a Doberman Pinscher featured prominently in some scenes. A dog after my own heart.

It's Tuesday and of course, it's Overlooked (or Forgotten) Film day - the weekly meme hosted by Todd Mason at his blog Sweet Freedom. So don't forget to check in and see what other movies other bloggers are reminding us of today. 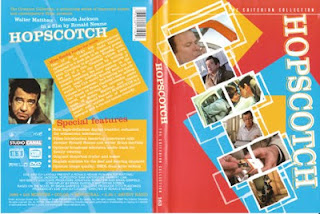