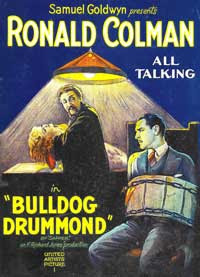 Tuesday is Overlooked (or Forgotten) Film day at Todd Mason's blog, so don't forget to check in and see what other films and/or Television or Audio/Visuals other bloggers are talking about today.

My entry this week is BULLDOG DRUMMOND (1929), a film directed by F. Richard Jones and starring Ronald Colman and Joan Bennett.

I'm new to this very old, pre-code talky (one of the first, I imagine) featuring the ultimate in suaveness, Ronald Colman, as the upper-crust war veteran and hero, adapted from Sapper's book. This is the first of the Bulldog Drummond films, but not the last. There were many more to come, a few with Colman but most with other actors inheriting the part, i.e. Ralph Richardson, John Howard etc. 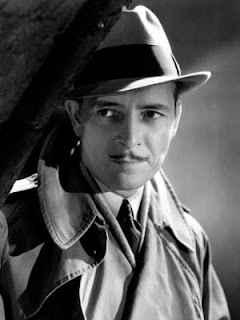 Though the film is rickety old in attitudes and some of the characterizations border on burlesque -  especially that of Claud Allister as the ludicrous Algy, the film's comedy relief. He plays a skinny upper-class twit who, I suppose, might have been meant to make Colman seem more manly in comparison. Though I must say that even I would look more manly in comparison to poor old Algy prancing around in his evening clothes and spouting, "Oh, I say....!" at the drop of a top hat. It's the sort of thing that Edward Everett Horton might be called upon to do a few years later but Horton had a way with it that few other actors could match.

The mechanics of the film work beautifully especially the brilliant sets by William Cameron Menzies and the wonderfully creepy, noir photography by George Barnes and Greg Toland. Because of Barnes and Toland (and the director, of course) there are a few very effectively frighting moments - just moments, mind you, but they work their spell. The whole film takes place at night with odd angles and shadows sharply drawn in black and white - if you're going to skulk, it's always best to do it in the evening for the full effect. 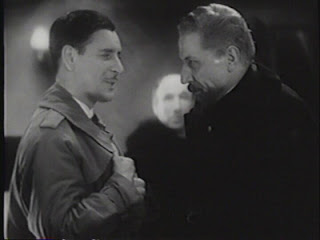 Most of the acting (except for Colman and Bennett) is straight from the silent film school of overwrought and mannered, while the skulking (literally) villains appear to have come over from some horror movie set during a break. Montagu Love and his henchman are laughably evil as is Lilyan Tashman as Irma the vamp, who begins the movie as a moll but soon graduates to head thinker, doer and order-giver all the while wearing the most outrageously hideous 1920's cocktail dress with a huge bow tacked to the hip.

Irma is the girlfriend of Montagu Love whom, it must be said, I'd never before seen in impassioned clinches with a woman on film or elsewhere and it's just as well. Montagu Love driven mad by desire? Yes, so it would seem.

WWI is over and Hugh 'Bulldog' Drummond is in the mopes. He's bored, you see. He even has the temerity to whistle at his 'old boys' club, something that is just never, NEVER done.

As he says (and I paraphrase), he's rich and doesn't need to work and he's intelligent but has nothing to use his brains on. What is a poor upper-crust Brit to do?

He advertises for adventure in the newspaper (wouldn't you?) and sure as you can say 'meet me under the bridge at midnight', he gets a doozy.

Drummond receives many responses to his ad, but the one that intrigues him most is from a desperate woman in need of help. If he's serious he's to meet her at midnight (of course, you know it has to be at midnight - it's in the rules) at an Inn in the country (at least it's not under a bridge). Once there, she will explain the situation and please, please, please he must help her since she is in terrible danger.

Okay, sounds good. Drummond is hooked. To the horror of his valet and his friend Algy, he goes off into the night seeking adventure. A few minutes later, Algy and the valet follow, vowing to keep Drummond - whom they suspect has gone nuts - from getting into real trouble.

At the inn, while Drummond is waiting for his pen pal to show up, Algy pops up instead and must be shunted off into another room at midnight when a knock at the door heralds a mysterious lady veiled in black. 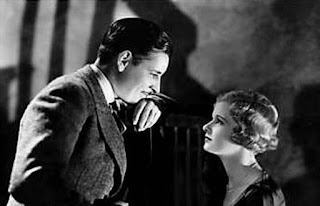 Enter beautiful Joan Bennett as the young woman snared in a vicious plot to get her uncle to hand over his fortune to a group of vicious crooks. 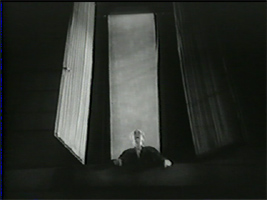 The rich uncle is supposed to be suffering from a nervous disorder and is being kept at at large and creepily mysterious psychiatric hospital out in the middle of nowhere. 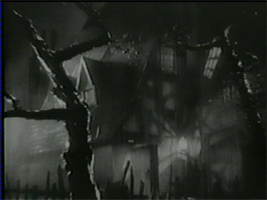 When he refuses to sign a paper handing over certain bonds in a London bank to the head crook (Montagu Love), he is tortured and drugged. These are real comic book villains but that doesn't stop them being nasty and icky. 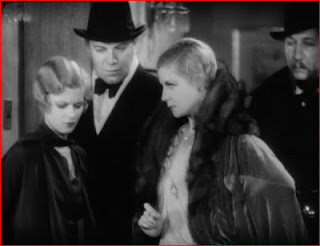 It's all non-sensical but then, as I always tell you, these films are not meant to make a lot of sense. I enjoyed the atmospherics, the car chases, the dark and rainy night, the thunder and lightning, the lingering shadows, the fast-paced jump from one absurd danger to the next, the hideously gleeful faces popping up out of the dark and the gang of creepy-crawly henchman who apparently have nothing to do but skulk around the 'hospital' while awaiting orders. There seem to be no other 'patients' and all the villains' energies are apparently spent on trying to control one stubborn old man and his courageous niece. 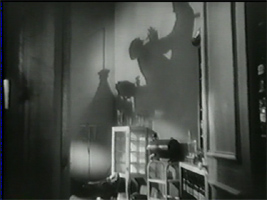 One supposes that the fortune must indeed be large for all these people to take all this trouble. (One also can't help wondering if Irma shops at Vamps R Us, but I digress.) 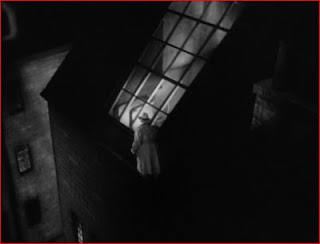 There's a great scene where Drummond is looking down into the 'torture' room from a criss-cross skylight above - so brilliantly lit and photographed, it hardly seems 1929.

For the moment, Drummond foils the evil-doers' plot and later Irma shows up at the inn (with a carload of villains) on track of the temporarily rescued uncle and niece. She spots Algy who can't help leering at her femme fatale voluptuousness. She in turn takes one close look at him and says, "Animal, vegetable or mineral?" Too cruel and too funny.

Algy sputters, "Oh, I say....!" But that doesn't stop him asking for her telephone number.

I told you it makes no sense. 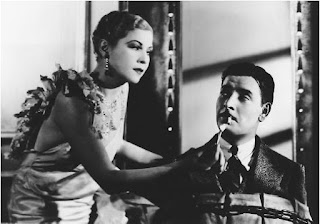 Anyway, Drummond is taken captive, Phyllis too. Then she's drugged and threatened with a fate worse than death in the shadowy back room at the 'hospital' by the sadistic Dr. Lakington, a guy with an evil sneer and a hypodermic.

In the end it's hard to figure who is more clever, Drummond or the bad guys, but all's well that ends well as the camera fades on a clinch between Drummond and Phyllis.

A fun movie I wish I could have seen on the big screen. 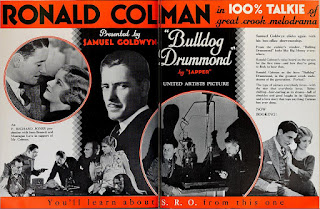 Bulldog Drummond is currently available for viewing on youtube. Link.
Posted by Yvette at 9:30 AM