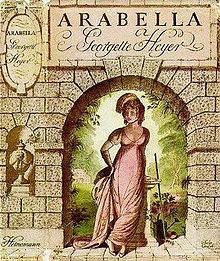 I've been absolutely keen on Georgette Heyer lately (in case you hadn't noticed) - enjoying the heck out of her books. Been spending all my time in Regency England among the pinks of the ton, the virtuous, gently bred heroines, the titled dandies in buckskin breeches and flowing capes, the ladies and gentlemen of British society 'who matter' - having a great time.

I absolutely promise this is the last of the Heyer posts from yours truly (at least for a while) - you must be tired of hearing about my current Heyer fetish but what can I do? I'm besotted. The only way to handle this is to let it run its course. Eventually I'll tire. One would hope. Ha!

All I'm doing today is posting a nice chunk of wonderful writing from Georgette Heyer's ARABELLA, written in 1949 and as fresh today as if it were written yesterday.

"A charming piece of frivolity about Regency England and the bewitching Arabella, daughter of a country parson, who arrives in London disguised as an heiress and consequently takes the town by storm."  News Chronicle

Here's a wonderful (and very visual) excerpt which concerns a certain Mr. Beaumaris, a rich gentleman who is the charming (in spite of himself) hero of the piece:

Mr. Beaumaris returned to his London house in time to partake of a late breakfast on Tuesday morning, having been absent for six days. It had been considered probable by his dependents that he would be away for a full week, but as he rarely gave any positive information on his movements, counted no cost, and had accustomed his highly-paid servants to live in a constant state of expectation of being obliged, at a moment's notice, to provide suitable entertainment for himself, or for a score of guests, his premature arrival caused no one any dismay.

It caused one member of his household a degree of joy bordering on delirium. A ragged little mongrel, whose jauntily curled tail had been clipped unhappily between his legs for six interminable days, and who had spent the major part of this time curled into a ball on the rug outside his master's door, refusing all sustenance, including plates of choice viands, prepared by the hands of the great M. Alphonse himself, [Mr. Beaumaris' French cook] came tumbling down the stairs, uttering canine shrieks, and summoned up enough strength to career madly around in circles before collapsing in an exhausted, panting heap at Mr. Beaumaris's feet.

It spoke volumes for the light in which Mr. Beaumaris's whims were regarded by his retainers that the condition to which his disreputable protege had wilfully reduced himself brought every member of the household who might have been considered in some way responsible into the hall to exonerate himself from all blame. Even M. Alphonse mounted the stairs from his basement kingdom to describe to Mr. Beaumaris in detail the chicken-broth, the ragout of rabbit, the shin of beef, and the marrow-bone with which he had tried to tempt Ulysses' vanished appetite.

Brough (the butler) broke in on this Gallic monologue to assure Mr. Beaumaris that he for one had left nothing undone to restore Ulysses' interest in life, even going to the lengths of importing a stray cat into the house, in the hope that this outrage would galvanize one notoriously unsympathetic towards all felines, to activity. Painswick (the valet),
with a smug air that rendered him instantly odious to his colleagues, drew attention to the fact that it had been his superior understanding of Ulysses' processes of thought which Mr. Beaumaris had to thank for finding himself still in possession of his low-born companion: he had conceived the happy notion of giving Ulysses one of Mr. Beaumaris's gloves to guard.

Mr. Beaumaris, who had picked Ulysses up, paid no heed to all these attempts at self-justification, but addressed himself to his adorer. "What a fool you are!" he observed. "No, I have the greatest dislike of having my face licked, and must request you to refrain. Quiet, Ulysses! Quiet! I am grateful to you for your solicitude, but you must perceive that I am in the enjoyment of my customary good health. I would I could say the same of you. You have once more reduced yourself to skin and bone, my friend, a process which I shall take leave to inform you I consider as unjust as it is ridiculous. Anyone setting eyes on you would suppose that I grudged you even the scraps from my table!"

He added, without the slightest change in voice, and without raising his eyes from the creature in his arms: "You would also appear to have bereft my household of its senses, so that the greater part of it, instead of providing me with the breakfast I stand in need of, is engaged in excusing itself from any suspicion of blame and - I may add - doing itself no good thereby."

Ulysses, to whom the mere sound of Mr. Beaumaris's voice was ecstasy, looked adoringly up into his face, and contrived to lick the hand that was caressing him. On his servants, Mr. Beaumaris's voice operated in quite another fashion: they dispersed rapidly, Painswick to lay out a complete change of raiment; Brough to set the table in the breakfast-parlour; Alphonse to carve at lightning speed several slices of a fine York ham, and to cast eggs and herbs into a pan; and various underlings to grind coffee-beans, cut bread, and set kettles on to boil.

Mr. Beaumaris tucked Ulysses under one arm, picked up the pile of letters from the table in the hall, and strolled with them into his library. To the zealous young footman who hastened to fling open the door for him, he said: "Food for this abominable animal!" - a command which, relayed swiftly to the kitchen, caused M. Alphonse to command his chief assistant instantly to abandon his allotted task, and to prepare a dish calculated to revive the flagging appetite of a Cambaceres. [First Duke of Parma - later Duke of Cambaceres]

Ulysses is a lowly little cur found suffering in the gutter by Arabella [the heroine of the piece] and given to Mr. Beaumaris [hero and unlikeliest of pet owners] to house, since she cannot keep the little dog while staying with relatives in town.

I loved the ending of this book so much that I reread it several times just for the pure enjoyment. This is one Heyer book I will definitely have to add to my own library.

Don't forget to check in at Patti Abbott's blog, Pattinase, to see what other forgotten books other bloggers are talking about today.
Posted by Yvette at 12:37 PM