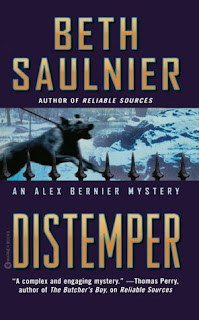 If it's Friday, it's usually Forgotten Books Day at Patti Abbott's blog, Pattinase. So don't forget to go take a look and check out the links. We're a fun bunch.

DISTEMPER by Beth Saulnier is one of those books I never get tired of telling people to read (though people may get tired of hearing me going on and on about it). Set in an upstate New York college town full of the sorts of people you'd meet everyday if you were a wily reporter for the town paper named Alex Bernier and you were slightly famous for making headlines in a previous murder case which struck a little too close to home.

Alex is a complicated but thoroughly engaging character, a young woman who lives a kind of casual yet intense lifestyle (the author's figured out a way to put those two seemingly opposite ideas together) which involves various housemates, several dogs, an unpleasable, foul-mouthed boss down at the paper and an awkward knack for stumbling over dead bodies. Or maybe not so awkward, considering she's a reporter. Plus the current case allows her to interact with a big, attractive, red-haired Irish cop:

"Good guard dogs you've got there. Yours?"

I shook my head. "That lump on the couch is mine. Her name is Shakespeare. She's part German Shepherd, part Beagle. She'd play fetch with a rapist. The big black poodle is Tipsy. He belongs to my roommate Emma. The shepherd is C.A.'s. He's a purebred, real champion stock. Her mom's family's really into the dog-show thing. Name's Nanki-Poo."

But as usual, I'm getting ahead of myself again. Let's back up to the utter 'wow' of a beginning to give you a better idea of what goes on in frozen wastes of upstate New York - land of the hearty and the eccentric - in case you didn't know.

"They found the first body in April, which is when things tend to turn up around here. The sun came out for the first time in six months, the top crust started to melt, and some poor bastard cross-country skiing in his shirt-sleeves saw her foot sticking up out of the snow."

So here we have a serial killer stalking and killing young women and of course, Alex gets caught up in the middle of it all. Especially since the killer isn't averse to keeping her in the loop - so to speak.

But as Alex links two and two together and discovers a four legged denominator common to the crimes, she puts herself in danger, yet again. Reporters lead such interesting lives.

The main reason for liking this book (other than the tricky plot and the likable main characters) is the dialogue. For me, the kiss of death with most books is the generally clumsy dialogue which makes the characters 'sound' as if they KNOW their words are being read. This is a book in which the characters speak exactly as you think they would. And that's good enough for me.

"Hey, you know, you got really big tits."

I looked up to find two college guys, each just slightly smaller than the new Volkswagen Beetle. They were bleary-eyed and standing close together, like they were holding each other up.

"Didn't ya hear me?" said lout number one. "I said, 'Man, you got really nice tits.' We saw ya through the window here." He gestured with his beer mug and I felt a splash go down my neck.

"Yeah," said his companion. "He said, like, 'Look at that girl with that great rack,' and I said, like, 'Dude, it's your duty to go in there and tell her how you feel.' And he said, 'Dude, you are so right.' And...here we are." He said it like he was Lindbergh describing his trip across the Atlantic. I didn't know whether to laugh at them or reach for my Mace. Oh, hell. If you live in a college town, sometimes you have to suffer for all the good coffee and reasonably priced drugs.

"Is there a question? Because if there is, I believe I may have missed it."

They looked at each other. "Huh?" said lout number two. "My friend here just wanted to express himself, that's all."

Where do these guys come from? Failed government experiments?

Alex is someone you want to meet. And not just because she has a nice rack.