Friday Forgotten (or Overlooked) Books: MAIGRET AND THE WINE MERCHANT by Georges Simenon 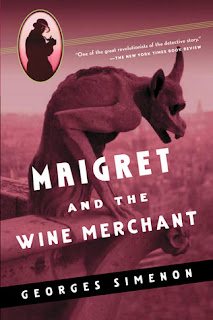 Friday is half over and I'm just now sitting down to write my Friday Forgotten Book post. The day has gone on without me, or so it seems. Patti Abbott usually hosts our weekly meme, but this week Todd Mason has the links on his blog, Sweet Freedom. Don't forget to drop by.

Last week I talked about a Maigret re-read that I enjoyed and this week I'm doing the same. Apparently I'm having a good time. So all the modern stuff will have to wait.

This week it's MAIGRET AND THE WINE MERCHANT (1970) in which the patient, thoughtful, intuitive and savvy Superintendent Maigret solves the murder of a very nasty man who delighted in taking advantage of those around him.

Monsieur Oscar Chabut, a rich, self-made man - the wine merchant in the title - is found shot to death on the sidewalk in front of a house of ill repute. When Maigret begins his investigation he immediately takes note of the fact that there is little grief displayed by the man's wife or for that matter, by anyone else who knew Chabut. The wine merchant was apparently a belligerent, take-no-prisoners business man who, because of his own insecurities, enjoyed debasing those around him, most especially all the women in his sphere who were subjected to aggressive sexual advances. Not a nice man.

Still, murderers can't be allowed to run amok even if the victim deserved his fate.

So, Superintendent Maigret once again, despite a bad cold, uses his wits, intuition and understanding of human nature to capture a killer, moving in a world where money apparently trumps morals.

'Maigret was never altogether at ease with the aura of opulence that goes with certain reaches of the bourgeoisie. It made him feel awkward and out of place. For instance, all the people on the list that Jeanne Chabut [the murdered man's wife] had provided belonged more or less to the same set, with its own rules, customs, taboos, and private language. They forgathered in restaurants, theaters, and night clubs, spent their weekends together in country houses, and in the summer went off in droves to Cannes or Saint-Tropez.

Oscar Chabut, with his plebian good looks, had elbowed his way ruthlessly into this tight little world, and to prove to himself that he really had arrived he had found it necessary to go to bed with most of the women in it.'

I'm also currently reading a book of Maigret short stories, MAIGRET'S CHRISTMAS, in which all the stories take place in a wintry Paris whose streets are filled with holiday merry-makers. Crime acknowledges no holiday.

To see a complete list of all of Georges Simenon's books, please use this link.
Posted by Yvette at 1:30 PM