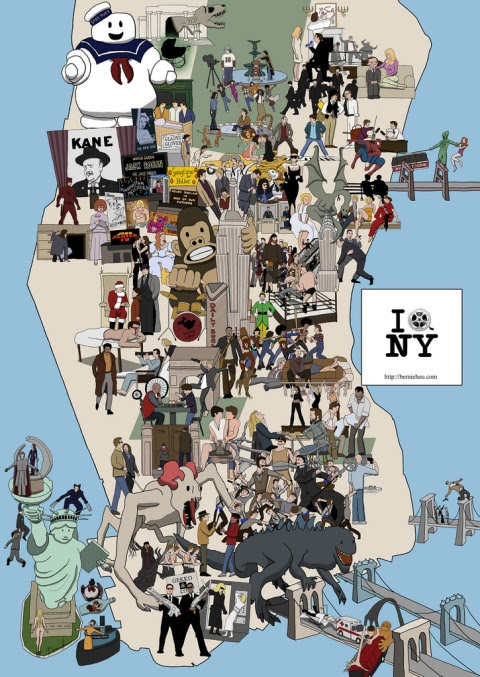 Yet again it is the anniversary of that bleak day, September 11, 2001. I thought I'd try something a little different for Forgotten Film (or other Audio/Visuals) Day, the weekly meme hosted by Todd Mason at his blog, Sweet Freedom.

Don't forget to check in and see what forgotten films or other audio/visuals, other bloggers are talking about today. We're eccentric and eclectic. Can't ask for much more than that.

Here's my entry for this week:
New York In the Movies

Twelve Films set in NYC (real or imagined) which will make you smile and remind you of what a wonderful place the city is, then, now and forever.

Not in any specific order, just listed as they occurred to me:

1) MOONSTRUCK (1987) Directed by Norman Jewison and starring Cher, Nicholas Cage and a sterling cast of terrific actors including a scrabbling pack of assorted fuzzy dogs and a feisty old Italian actor named Feodor Chaliapin who gets the second best line in the movie: "I'm confused." Romance, comedy, Lincoln Center, Brooklyn and Italian food. What could be better?

2) ARSENIC AND OLD LACE (1944) Directed by Frank Capra and starring Cary Grant, Priscilla Lane, Raymond Massey and Peter Lorre. From its memorable opening sequence at Ebbet's Field - home of the Brooklyn Dodgers - to the cozy house (situated next to a grave yard within viewing distance of the Brooklyn Bridge) of two adorable old ladies who have been sequentially getting rid of lonely old men who happen to stop by for a glass of home-made elderberry wine, this movie is a total loony delight. It doesn't hurt that most everyone in the story is nuts and that it all takes place on Halloween. And to top it all off, Edward Everett Horton and Jack Carson stop by.

3) THE WORLD OF HENRY ORIENT (1964) Directed by George Roy Hill and starring Peter Sellers, Tippy Walker, Merrie Spaeth and Angela Lansbury. Two coltish school girls indulge their adolescent (and very inconvenient) adoration of womanizing pianist, Peter Sellers, by spying on him and putting a damper on his love-life. The only film I can remember which shows girls coming of age in a play-land which happens to be the city of New York. Delightful.

4) HANNAH AND HER SISTERS (1986) Directed by Woody Allen and starring Mia Farrow, Barbara Hershey, Dianne Wiest, Michael Caine and Woody Allen. (I'm not the world's biggest Woody Allen fan but I find myself including two of his films on this list. Go figure.) Between one boisterous Thanksgiving and the next, romantic complications occur in one Manhattan family. The thing I like most about this film is that it shows what living in NYC actually looks and feels like - more or less.

5) ON THE TOWN (1949) Directed by Stanley Donen and Gene Kelly, starring Gene Kelly, Frank Sinatra, Jules Munshin, Ann Miller, Betty Garrett and Vera-Ellen, including a small part by the wonderful, rubbery-faced Alice Pearce who steals the movie. Three sailors on leave in NYC have only 24 hours to see everything and, of course, meet some girls and fall in love. Great dancing and Betty Garrett as a cab-driver. Terrific. "New York, New York's a wonderful town. The Bronx is up and the Battery's down, and people ride in a hole in the ground.....!"

6) THE THIN MAN (1934) Directed by W.S. Van Dyke and starring William Powell and Myrna Loy as the always effervescent Nick and Nora Charles. Ex-detective (or so he keeps telling everyone) Nick Charles has married a rich wife - the oh-so-sophisticated, delightful and indulgent, Nora - so he no longer needs to work. But murders will keep happening and beautiful young girls will keep asking Nick to get involved - in between cocktails. A delightful murder mystery that takes place in a make-believe tinsel-town New York over Christmas.

7) BIG (1988) Directed by Penny Marshall and starring Tom Hanks. Robert Loggia is perfection as the likable head of a NYC toy company. He practically steals the movie from Hanks. Remember the piano keys scene in F.A.O Schwartz? My favorite scene, however, is the staff meeting in which Hanks (an adolescent boy in a grown man's body - literally) comes to the attention of the boss and aces out the other staffers. John Heard is hilarious as one of the aced-out staffers.

8) SEARCHING FOR BOBBY FISHER (1993) Directed by Steven Zallian and starring Joe Mantegna, Joan Allen, Ben Kingsley and Max Pomeranc. A film based on real-life chess prodigy Josh Waitzkin's early life which includes some wonderfully atmospheric scenes of chess hustlers in Manhattan's Washington Square Park. One of the hustlers: Laurence Fishburne. Max Pomeranc is absolutely right as the young chess genius who, despite the pressures, must find the right balance between being a prodigy and being just a boy - a terrific performance.

9) TOOTSIE (1982) Directed by Sydney Pollack and starring Dustin Hoffman and Jessica Lange. A New York 'method' actor who has a rep for being difficult to work with, impersonates a woman and, improbably, gets a leading role on a top television soap opera. That's about all you need to know. Hoffman is brilliant and funny and, incredibly, makes for one terrific broad.

10) GUYS AND DOLLS (1955) Directed by Joseph L. Mankiewicz and starring Marlon Brando, Jean Simmons, Frank Sinatra and Vivian Blaine. Based on the Broadway show with characters created by Damon Runyon and set in a glittery fantasy of New York - shot entirely on a sound stage. Loved the scenes of hoods, gamblers and Times Square low-lifes dancing and singing.

11) THE ADJUSTMENT BUREAU (2011) Directed by George Nolfi and starring Matt Damon and Emily Blunt. New York has never looked more beautiful or more mysterious than in this fantasy tale of star-crossed lovers. A fabulous film in which suspension of disbelief is paramount. Matt Damon can do no wrong as far as I'm concerned. Emily Blunt isn't bad either. But New York almost steals the show.

12) MANHATTAN MURDER MYSTERY (1993) Directed by Woody Allen and starring Woody Allen and Diane Keaton as a married couple who are too curious about the death of a neighbor When the nice elderly lady upstairs dies suddenly, New Yorkers Larry and Carol Lipton decide (well, Carol decides, much to Larry's consternation) that the husband is a killer. Not hilarious fun, but funny enough and the ambiance of living in NYC is perfection. (Thanks Dorian, for convincing me to take another look at this film.)

Obviously there are many MANY more movies that have been set in NYC, this is just a brief sampling of some of my favorites. When you think of NYC - what films instantly leap to your mind?

P.S. The poster at the top of the post has clues to the many films made in NYC then and now.
Posted by Yvette at 1:26 PM