Twenty Questions! Found this quiz over at Mythical Monkey's blog (I love movie quizzes) and decided I must answer the questions immediately. (Monkey see, Monkey do - well, you know I had to slip that in.) Don't forget to check in over at the Monkey's and see his answers - when you finish reading mine, that is. The quiz originated at Cinematic Reviews so go take a look at those answers too.

I'm doing as Monkey did (yet again) and breaking the answers up into two posts. One today. One tomorrow. 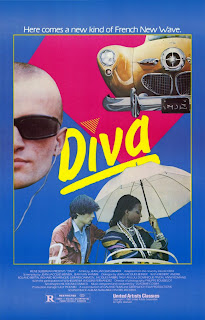 1) WHAT IS YOUR FAVORITE MOVIE? This is a tough one because in truth I have about five favorites I can watch at any time simply because. But forced to choose, I'd say the movie that always springs to mind for me is DIVA (1982). But at the risk of copying the Monkey once again, I also love THE THING From Another World and THE THIN MAN. Then there's LAWRENCE OF ARABIA and Jean Cocteau's BEAUTY AND THE BEAST or THE GHOSTBREAKERS with Bob Hope and Paulette Goddard. Actually I have about 10 favorites that I can (and often do) watch repeatedly.

2) WHAT IS YOUR LEAST FAVORITE MOVIE? Oh, this is really tough because I don't usually sit through bad movies. I either get up and leave or turn off the machine. But if pressed I'd say that my least favorite movie of recent years was director Roland Emmerich's mish-mash fiasco, ANONYMOUS which purported to debunk the idea of Shakespeare having authored his plays. Incoherent and dreadful.

A few other films I disliked intensely:  DE-LOVELY (2004), a musical life of Cole Porter starring Kevin Kline and Ashley Judd. It was amazingly ham-handed and thoroughly un-watchable. Third runner-up would be the first SHERLOCK HOLMES (2009) with Robert Downey Jr. and Jude Law. Fourth runner-up, IT'S COMPLICATED (2009)with Meryl Streep and Alec Baldwin - horrible. 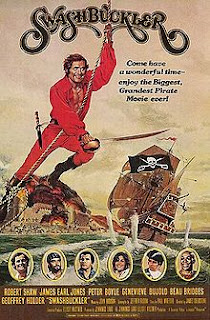 3) NAME ONE MOVIE YOU INITIALLY LOVED UPON FIRST VIEWING BUT THEN GREW TO HATE: Well, there have been several, but the one that leaps instantly to mind is SWASHBUCKLER (1976) with Robert Shaw and Genevieve Bujold. I loved this movie when I first saw it in the theater eons ago. But when I was finally able to watch it again earlier this year, I disliked it intensely. Though the opening sequence and wonderful music still work their magic.

4) NAME YOUR BIGGEST GUILTY PLEASURE FILM: I have so many I feel extra guilty just settling on one. But I guess I'd pick, ABBOTT AND COSTELLO MEET FRANKENSTEIN (1948).

5) YOUR FAVORITE QUOTE FROM A FAVORITE ACTOR/ACTRESS (Line from a movie.):

IN & OUT starring Kevin Kline, Tom Selleck and Joan Cusack.

Left at the altar by high school teacher Kevin Kline who has been outed as gay though he himself is still unsure, the very frustrated bride (Joan Cusack) runs from the church and hits a local bar in her bridal get-up. There she meets up with Tom Selleck who buys her a drink but tells her that he too is gay. Joan Cusack flings herself dramatically onto the counter top and wails as only Joan Cusack can wail, "IS EVERYBODY GAY?"

I laughed so hard I almost fell off the sofa. And by the way, Tom Selleck is actually quite wonderful in this.

Another line I love, from MOONSTRUCK (1987): "Snap out of it!" said by Cher to Nicholas Cage when he professes his love for her. As she says her line she slaps his face, but then they go into a mad clinch. (If I'm remembering correctly.) Another line from the movie is uttered near the end at a contentious family breakfast where one couple breaks up and another couple plans a marriage. The ancient grandfather played by the lovable and legendary Feodor Chaliapin, Jr. complains, "I'm confused." Between you and me, I don't blame him.

Yet another great movie line is uttered by Bob Hope in THE GHOSTBREAKERS (1940), when his gun goes off in the hotel hallway and he thinks he's shot someone. 'Is it murder if you kill a
perfect stranger?'

6) FAVORITE QUOTE FROM AN ACTOR OR ACTRESS THAT IS NOT A LINE FROM A MOVIE:  "I pretty much try to stay in a constant state of confusion just because of the expression it leaves on my face."  Johnny Depp 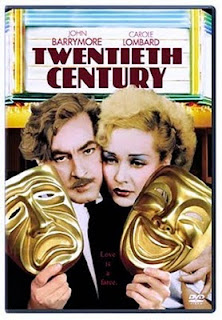 7) THREE FAVORITE MOVIE SCENES?: Off the top of my head? I'm like the Monkey in this as well: Ask me tomorrow and I'll probably answer with three different scenes.

1) John Barrymore plays a ham-bone Broadway director in TWENTIETH CENTURY (1934) only too eager to pretend he's dying when attacked (not very severely) in his train compartment. As his pals rush in, he moans, "The final irony, killed by a lunatic!" It's the way that Barrymore says it - as if it were the grandest of dramas. Hilarious! Love this scene and it works for me every time I see the film which is, needless to say, often.

3)The big reunion scene between Heath Ledger (Ennis Del Mar) and Jake Gyllenhaal (Jack Twist) in BROKEBACK MOUNTAIN. In the script, the two men haven't seen each other in four years and their emotional reunion is incredibly moving. Just gorgeously done. Director Ang Lee improves on the workings of the scene as set in Annie Proulx's short story.

8) NAME FOUR FILMS THAT SHOULD NOT HAVE WON THE OSCAR FOR BEST PICTURE:

2005 - CRASH won instead of BROKEBACK MOUNTAIN. An incredible oversight - no excuse. Other films nominated that year were: CAPOTE, GOOD NIGHT, AND GOOD LUCK, MUNICH.

1998 - SHAKESPEARE IN LOVE won, when most any of the other nominees HAD to be a better picture. Other films nominated that year were: SAVING PRIVATE RYAN, LIFE IS BEAUTIFUL,  ELIZABETH (well, maybe not this one), THE THIN RED LINE.

1948 - HAMLET won instead of THE RED SHOES which for me, after repeated viewings, remains a classic of movie making. Other films nominated that year were: JOHNNY BELINDA, THE SNAKE PIT, THE TREASURE OF THE SIERRA MADRE.

1938 - YOU CAN'T TAKE IT WITH YOU won instead of the brilliant GRAND ILLUSION. Other films nominated that year were: TEST PILOT, PYGMALION, JEZEBEL, THE ADVENTURES OF ROBIN HOOD, FOUR DAUGHTERS, BOYS TOWN, THE CITADEL, ALEXANDER'S RAGTIME BAND.


9) TOP FIVE MOVIES OF THE YEAR - Currently? I can only go by movies I've watched on DVD so far this year, since I rarely go to the actual movies anymore, rarely see anything brand new. Truth be told, I simply prefer older movies. 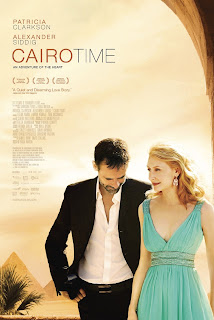 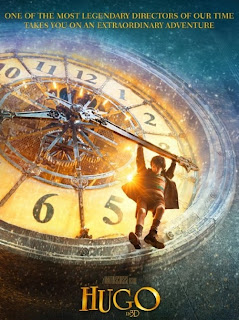 I've got MY WEEK WITH MARILYN starring Michelle Williams, sitting and waiting to be watched when I have a moment, but that's about it - new-wise.

3) THE ADVENTURES OF TIN TIN (2011) Boring. I was expecting something fun.

I'll have the ten final answers to the quiz, tomorrow. Stay tuned.