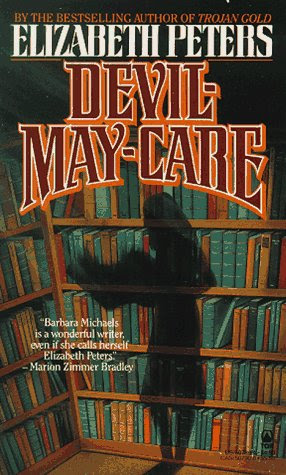 If it's Friday, it's Forgotten Book Day, so don't forget to take a look at Patti Abbott's blog - she's our hostess with the mostest (GAK! Did I actually say that?). All the relevant links from other participating bloggers are gathered there and waiting for your perusal. As I like to say: we're an eclectic (and often eccentric) bunch of readers.

My choice for today is a book that somehow wound up on my bookshelves though I swear I never bought it - maybe a discard from a friend? I rarely borrow books because I lose track of them - could this be an errant book from long ago? Possibly. Probably.

At any rate, DEVIL MAY CARE (1977) is NOT an Amelia Peabody book, but it is one of many inventive, funny, well-written mystery/romances created by the very prolific Elizabeth Peters (aka Barbara Michaels) in the many years she's been writing up a storm.

Our heroine this time is Ellen (aka Ellie), a young, likable, level-headed woman, an obvious graduate of the Mary Roberts Rinehart School for Women in Peril Plots. She is not only all that, but she is someone we can instantly identify with even if we are forty or more years older than she is. In other words, she is not a nit.

She is, however, engaged to the wrong man. Henry is a 'nit' as we soon find out from his dialogue and thoughts on the drive down to Ellie's eccentric and exceedingly rich aunt Kate's house. Ellie will be caretaking the house (so here we have the 'girl alone in the big empty house' thing going on from the getgo) while her aunt takes an unspecified trip.

What Peters does that is so interesting is begin the book from the rather dense Henry's point of view so we're instantly persuaded that he is obviously the wrong man for ANYONE with any sense and we immediately sympathize with the girl sitting by his side about whom we only know what is revealed through their conversation.

"Henry Danvers Willoughby was an extremely fortunate young man. On a marital eligibility scale he  ranked slightly below millionaires and well above promising young doctors. He was aware of his status, but was rather inclined to resent people who described him as lucky, for he felt that he owed his success to his own abilities - intelligence, honesty, hard work, and charm. His family connections had nothing to do with it."

The fact that Henry is a graduate of Harvard Law (shoved through forcibly by said 'family connections') and works for his uncle's Washington law firm - something he goes out of his way not to mention - doesn't strike him as having much to do with luck.

Ellie's aunt Kate is a woman of many artistic hobbies and rumored to be a witch. Her specialty? Shingles. She is a woman of a certain age who is not afraid to allow her many eccentricities to run rampant. It doesn't hurt that she's the opinionated, take-charge type, the sort everyone turns to in an emergency and the sort who doesn't give a fig about her reputation or what the neighbors think - something only the very rich or the very poor can manage successfully.

We get the hint going in that Kate will not be too fond of Henry. We don't like him much either so when he heads back to Washington after dropping Ellie off and meeting Kate for the first time, he will not be missed.

Oh, neglected to mention that Aunt Kate shares her mansion with many pets of the feline and canine variety and one rodent: a white rat named Roger who rules the roost. Hence the reason for Ellie's care-taking duties which involve mostly taking care of said pets and making sure they're all fed and watered and safely accounted for at the end of the day.

It's when things begin bumping about in the night and ghostly apparitions make their debut that things go sour at the mansion and Ellie is forced to turn to her neighbors for help. One of the neighbors is Donald Gold, a young doctor on hiatus, son of the town's genial, elderly and over-worked medico. Aha! I can hear you saying and you'd be right.

The dogs, one a St. Bernard, are no help since they're more afraid of the goings-on than Ellie. Only the 11 or so cats take everything in stride, their only apparent complaints having to do with their sleep being disturbed by Ellie's screams in the night.

One of the things I most enjoy about Elizabeth Peters' writing is she knows exactly how to write animals into a plot and best of all, knows how they can either alleviate or contribute to the general tone of mystery or hysteria, as the case may be.

The first night Ellie spots something ghostly in the dark:

'None of the animals had seemed to notice the apparition. That fact didn't fit the mythology of the supernatural. Some animals were supposed to be sensitive to such things; in all the ghost stories she had read they snarled, or fled, or bristled - or something...The only reaction she had observed was a yowl when she trod on someone's tail.

Ellie glanced involuntarily at the open doorway. She had to leave the door open since the animals insisted on going and coming during the night. Like most old houses, this one was never silent. The timbers moaned and whispered with changes in weather and humidity, and some members of Kate's zoological collection were nocturnal creatures. Ellie was accustomed to these sounds, including the heavy, plodding footsteps of Ambrose, the thirty-pound Maine coon cat, which sounded exactly like the tread of a large man.

A rustling, scrabbling sound might have been unnerving if Ellie hadn't known what it was; she continued to watch the open doorway, and when the shining white shape appeared, she greeted it familiarly.  "Hello, Roger. I haven't seen you all day."

The rat squeaked at her, and two of the cats stirred uneasily. They were terrified of Roger. They had been taught that he was sacrosanct, but Roger didn't feel the same way about them and they knew that he was capable of royal displeasure if they got in his way. Roger the rat was the undisputed head of the house-hold pecking order; his progress through the house resembled that of an emperor, as all creatures fell back before him.

After a moment Roger left; he obviously had other plans in mind, and had only stopped by to pay his respects.'

I have to tell you, I laughed out loud when I read this and knew then, I would love this book.

Turns out the apparitions which appear nightly and cause all sorts of disturbances have much to do with the history of the town's five or so influential families and their diabolical secrets. The few descendants of the original town founders (all characters in the story) are very much concerned with keeping their family secrets dead and buried. It's like that in small town, I suppose - especially when you don't have much else to do but meddle.

While the 'mystery' at the root of this story is easily solved and there are no current murders (but plenty of mayhem - ghostly and otherwise) it is the fun of hanging out with Ellie and Donald and the animal brood that makes this book such a delight.

There's also a seance on a dark and stormy night; thunder and lightning outside while inside all hands sit around the table seeking guidance from the spirits. There's a St. Bernard hiding under  said table who makes his appearance known by standing up just as the lights go out and there's a loud banging at the front door.

What a fun read this would be for Halloween or for any day or night you're in the mood for a light-hearted mystery. Something tells me I'm going to have to go back and find all the Elizabeth Peters books written before and during the writing of the Amelia Peabody series.

P.S. If you already know about the Amelia series, then you know what a terrific writer Elizabeth Peters (a real life archaeologist named Barbara Mertz) is. Her insouciant wit and intelligence shine in everything she does.

Use this link for a list of all of Elizabeth Peters' many books.