Forgotten (or Overlooked) Book: THE CURSE OF THE BRONZE LAMP (1945) by Carter Dickson 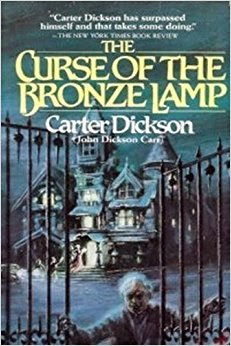 Yes, I can hear you saying: But Yvette, you swore you would not be reading anymore Carter Dickson books for awhile. Yes, I did and I gave good enough reasons why in my recent post. But as you all know, I am a woman of capricious nature and faced with a book entitled THE CURSE OF THE BRONZE LAMP – what would you have me do??
I’m not made of steel, you know.

And besides, Sir Henry Merrivale is not, in general, his usual obnoxious self in this one. But I didn’t know that going in and I groaned thinking what I might be in for, but damn me if I could resist the lure of the title. And when I saw the word ‘’ in the synopsis – it was a done deal. I mean, this is the sort of thing that makes my heart beat just a little faster – THE CURSE OF….or THE MURDER OF….or THE ADVENTURES OF…or THE DEATH OF… and remember MURDER ON SAFARI?? These are the sorts of titles that make my heart go pitter-pat.

(I’ve got another great title coming up next week, but it’s not a Carter Dickson and I’m still in the middle of reading it.)

Hint: Plot-wise, THE CURSE OF THE BRONZE LAMP has something specifically in common with another Dickson/Merrivale book, AND SO TO MURDER. Though one takes place in a movie studio in and the other takes place in and then in a big old stately manor house in the English countryside. I can say no more.

If the following doesn’t have you itching to get your hands on THE CURSE OF THE BRONZE LAMP, then your idea of a fun read and my idea of one are irreconcilable.

In 1934-35, a group of British archaeologists headed by a Professor Gilray and the Earl of  Severn had discovered the tomb of an ancient Egyptian pharaoh on the west bank of the . The world was thrilled. Reporters eager to rhapsodize about the riches supposedly discovered descended on the site. Remembering what happened when the tomb of King Tut had been unearthed a few years earlier, they searched about for a curse angle that would thrill their readers. They wouldn’t have long to wait.

In the second year of the dig, Professor Gilray was stung by a scorpion and promptly died. The curse angle was on with a vengeance. Was it the tomb or the bronze lamp that killed the professor? Or both? and his daughter Helen as well as his associate Sandy Robertson (who happens, of course, to be in love with Helen) all poo-poo the curse.

But now Lord Severn, feeling a little under the weather, insists on sending his daughter along with the infamous bronze lamp, home to Severn Hall. He and Robertson will follow along at a later date.

At the train station surrounded by reporters Lord Severn's daughter emphatically states that there is no curse and all she wants to do is get back to Severn Hall and place the bronze lamp on the mantelpiece in her room. But a local soothsayer named Alim Bey, declares (on the train platform in full view of reporters) that Lady Helen will not reach that room alive.

Meanwhile Sir Henry Merrivale traveling on the same train is also headed back to after his own trip to .  Not so coincidentally, Lady Helen is sharing the carriage with ‘the old man.’ She garbles some nonsense about curses and gossip and reporter speculation and could he (Merrivale) in his wisdom give her some advice but before he can say much she suddenly has a change of heart and decides she doesn’t want Merrivale’s help at all. And you thought I was capricious.

Sir Henry will later weave this odd moment into his who-did-what-to-whom theory as he puts together the truth of the entire matter.

But before that happens, we have a disappearing Lady Helen who vanishes as soon as she enters Severn Hall. Then we have the matter of a missing portrait AND a mysterious man named who shows up wanting to purchase the bronze lamp. Then there is the matter of Kit Farrell, another young gent in love with Helen who is frantic to discover what has happened to her. Not to mention their mutual friend Audrey Vane who happens to be in love with the aforementioned Sandy Robertson – so lots of romantic complications as well as mysterious doings. Not the least of which are the missing gold artifacts which disappeared from the original Egyptian haul and are nowhere to be found – have they made their way illegally to ?

Inspector Masters and Sir Henry are soon on the scene as the merry mix-up gets more and more complicated and yet another person vanishes.

This is one of those hidden in plain sight stories in which the clues are pretty fairly distributed except for the identity of the bad guy which, in the end, seems to me to be more of a ‘close your eyes and pick a killer’ moment than anything really logical. But other than that, a terrific book with plenty of page-turning diabolics to keep those of us who love this sort of thing, reading late into the night.