Friday Forgotten (or Overlooked) Book: WHO KILLED THE CURATE? (1944) by Joan Coggin 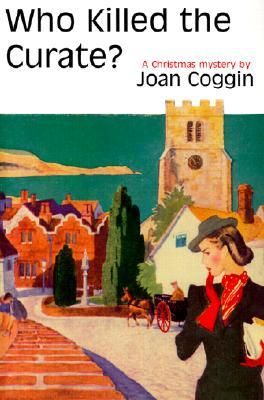 When this book was recommended on someone's recent blog post I first thought it was one of those modern charmless ultra-cozies being written by everyone these days, but turns out I was wrong. Joan Coggins is a Golden Ager - who knew? I forget where I read the review but whoever it was - A BIG THANK YOU! The book was a joy from beginning to end.

Quote from the backcover: "Coggin writes in the spirit of Nancy Mitford and E.M. Delafield. But the books are mysteries, so that makes them perfect." Katherine Hall Page, mystery author.

Actually this is an ultra-cozy, but loaded with charm and the little delights that writers of that era were so clever about. Why hadn't I known about her work? It turns out that Joan Coggin was not the most prolific of writers, she wrote four mysteries and then stopped. She also wrote a few 'girl books' under the pseudonym of Joanne Lloyd - books with titles like JANE RUNS AWAY FROM SCHOOL and BETTY OF TURNER HOUSE - that sort of thing. After the mysteries published from 1944 - 1949, she wrote no more for thirty years and died in 1980. I can't find any other book listings for her online. For whatever reason four was all she wrote and maybe that's why she never rose up the ranks of fame and mystery-writing fortune. So now it's up to us to spread the word about her talents and her delightful heroine, Lady Lupin Lorrimer Hastings.

Remember how I've previously mentioned books with certain titles will always catch my eye - well, who could resist the allure of WHO KILLED THE CURATE? Not me.

I love a good mystery set in an English village just before or during WWII, especially when it's loaded with the types of villagers that in real life would drive you crazy, but in book form are highly entertaining. AND oh by the way, Christmas happens in the middle of it all. I mean, come on, what could be better?

Lady Lupin Lorrimer is a young bored about town member of the 'smart set' when at a London party she first meets Andrew Hastings, the vicar of Glen Marks Parish. She is in her early twenties, he is in his early forties. It is love at first sight to the consternation of friends and family.  Before long  'Loops' as she's known by her close friends, marries the handsome vicar and off they go (after a proper honeymoon) to his quiet house in a quiet country village in Sussex and a life of quiet parish doings.

Unfortunately Lady Lupin is not sure how a vicar's wife is supposed to behave since she's never actually spent much time around clergy or churches. Her duties seem strange and utterly bewildering and life at the vicarage, instead of being the too quiet life she'd been dreading is instead full of social invitations, dinner invitations, tea parties, sherry parties and villagers coming and going at all hours seeking advice and wanting Lady Lupin to join this committee or that or plan one fete or another without hardly giving the poor girl a chance to breathe.

From the back cover: 'She's hopelessly at sea at the meetings of the Mother's Union, Girl Guides, Temperance Society. Nonetheless, she's determined to make her husband Andrew proud of her - or, at least, not to embarrass him too badly.'

It doesn't help that Lady Lupin is a scatterbrain who lives up to her nickname of Loops. However, since she is charming, endearing and utterly guileless, she is not faulted for her lack of brilliance. The vicar is besotted with her and she with him and so she's determined not to be undone by expectations except occasionally, but then she thinks how life without Andrew wouldn't suit her at all, and she buckles down to do her best to get things right.

The villagers welcome Lady Lupin with open arms, thankful their vicar has at last brought home a wife even if she is not exactly what they had imagined for him.

The setting is just right: Glanville, a charming village in the English countryside of Sussex, a warm and comfortable rectory with cozy nooks and crannies, working fire places and comfy chairs, the requisite English garden and an exhausting array of assorted villagers to keep things hopping.

Much of the first half of the book is taken up with Lady Lupin's hapless forays into the life of the parish - often just carried along willing to do her duty, reluctant to give offense, nudged here and there,  as things somehow come together and work out in the end. No one seems to really mind Lady Lupin's misunderstandings and occasional faux pas probably because she is, first and foremost, a lady. And being an attractive young woman doesn't hurt.

"The evening on which she was to go to her first dinner party found her rather nervous. She had bought two black evening dresses while they had been in Paris on their honeymoon, laboring under the delusion that they were suitable for a vicar's wife. Andrew was not sure of their suitability, but he liked seeing her in them.

"How do I look, Andrew?" she asked, turning from her looking-glass as he came into the room. Her fair hair had been brushed back until it looked like silver, she had really put on very little rouge or lipstick, and her dress was black; but somehow she didn't look like a clergyman's wife. Andrew burst out laughing, then he caught her up in his arms and kissed her until she had to recomb her hair and repowder her face.

Andrew sighed as he watched her. "To think," he said, "that after sixteen years of blameless priesthood, that this should happen to me! You don't look like a wife at all, least of all a vicar's wife. Come along, we mustn't be late. When they say seven forty-five in Glanville, the mean seven forty-five."

The rest of the cast of characters include Lupin's close London friends Duds and Tommy Lethbridge who, currently traveling, will show up by invitation to spend a few days, alongside the vicar's nephew, Jack Scott, who happens to be a secret service agent on leave and visiting over Christmas.  The curate in the title, Mr. Young is not the most likable sort but is devoted 'to the adventure of Christianity...I should like to see a missionary box in every home, I should like children to spend their leisure hours in reading lives of missionaries; I should like every boy and girl in the parish to grow up with the wish to be missionaries themselves."  See, that's the sort of thing that after awhile just gets to be too tedious - no wonder the guy gets bumped off.

Other villagers worth noting are the ascerbic and witty Diane Lloyd, a 38 year old writer of children's books currently writing a detective story, and her room-mate 20 year old June Stuart whom Lupin thinks she'll turn into a friend. In fact, Lupin likes both women and is therefore most terribly upset with Diane is first suspected of poisoning Mr. Young, the curate. She has a strong motive which you will probably deduce rather quickly.

But almost everyone in the village sooner or later comes under suspicion (for a brief moment, even Andrew!) including the single-minded Mrs. Brown wife of the town doctor, unable to keep her servants for long and always on the lookout for that rarity - an unemployed maid, churchwardens Mr. and Mrs. Grey - she who is involved in almost every social and/or church activity in the village - they are the couple with whom the unfortunate curate had tea on the fateful day and in whose house he died, there's also Phyllis Gardner whose chief interest in life is the Girl Guides and a pimply young fellow named Lancelot who is sure he's going to be arrested at any moment. And of course a whole gaggle of girl guides themselves and a bunch churchy ladies, all in the habit of walking in and out of the vicarage looking in vain for Lady Lupin to take the lead in all manner of activities of which she knows nothing. All very nice people, very respectable and not the sorts of people who would ever think of committing murder.

But you know what Agatha Christie had to say about respectable people.

So when murder does come to Glanville, what else is Lady Lupin to do but turn sleuth especially since Andrew's nephew Jack the secret service agent, is on the premises willing to lend a hand. Her motive is that she doesn't want any of her friends to be the murderer because everyone's too nice and anyway even if she does find out who killed the curate, she's sure they must have a very good reason.

Christmas comes and goes and the day after (Boxing Day in England) is philosophized on by Lady Lupin:

"What I like about Boxing Day," said Lupin, "is that no one can expect one to do anything. The shops are shut, so even if there is no food, one doesn't have to go out and get any. One's friends are occupied in writing thank-you letters, and the poor are usually feeling ill after their one square meal of the year, so one is bound to have a little peace for once."

But not for long.

WHO KILLED THE CURATE? is lots of fun abetted by lots of laughs in service of a pretty good whodunit. Though the primary reason for liking the book is Lupin Lorrimer Hastings herself, with ambience a close second, not to mention the sorts of English village goings on that seem quaint and engaging and oddly attractive - at least to me. Not serious literature by any means, but still a treat and I'll be reading the other three in the series sooner rather than later.

Once again it's Friday, so don't forget to check in at author Patricia Abbott's host blog, Pattinase, to see what other forgotten or overlooked books other bloggers are talking about today.