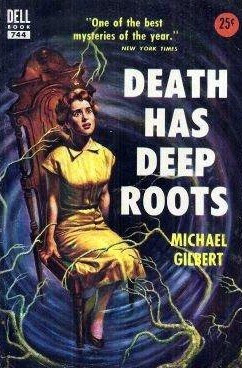 Remember when I went on a Michael Innes tear? Well, I'm kind of doing the same thing with Michael Gilbert, so bear with me. This is the sixth (or maybe the seventh) of Gilbert's books I've read so far - and I'm currently also in the middle of some of his Mr. Calder and Mr. Behrens short stories.  Though there was one clunker back in the beginning right after SMALLBONE DECEASED (a brilliant classic), the rest have been excellent in varying degrees. Kind of a revelation really, because for a writer this good to have languished undiscovered by me for so long is odd, considering that Gilbert wasn't entirely unknown by everyone else AND he'd already written one classic. You'd think I would have stumbled over him at some point or other. But better later than not at all - right?

Michael Gilbert is kind of unique in that he didn't write the same book over and over -  not that that's always a bad thing, in fact there are some writers I return to over and over precisely because I know what to expect story-wise, but not Michael Gilbert. With this author, you just never know what you're going to get. He writes more in the thriller style than whodunit but somehow manages both equally well. Not all his protagonists are cut from the same cloth though all, so far, have been English, reasonably pragmatic and competent. A bit like Eric Ambler, but maybe not as dry and removed.

DEATH HAS DEEP ROOTS is set a few years after WWII and concerns the plight of a young French woman, Mlle Victoria Lamartine - a minor player in the Resistance - on trial in London, accused of the murder of Major Thoseby an ex-lover and father of her deceased child. Thoseby too had worked for the Resistance, though in a more important capacity and it was during that work that he is supposed to have hooked up with Mlle Lamartine at a lonely farm in the then dangerous French countryside teeming with partisans and Nazis.

But the accused denies any involvement with Thoseby and in fact, claims that the real father of her child was a young English flyer named Wells who was last seen in the clutches of the Gestapo on the same night as the residents at the farm were betrayed and rounded up. Later that same night, an unsuspecting Mlle Lamartine had stumbled right into the Germans on her way back from an errand. Yet somehow she survived incarceration and wound up storm tossed and jobless in London after the war. Very sympathetically a French refugee service found her a job as a receptionist at a small hotel providentially owned and staffed by people from the same area of France as the accused.

When Major Thoseby turns up dead in his room at the hotel (having gone there to meet Mlle Lamartine for reasons unknown) she is almost immediately placed under arrest by the officious and short-sighted Inspector Partridge. Later, the case will receive guidance from the author's series detective, Inspector Hazelrigg,  who hesitates to show up Partridge, but wants to see justice done. His presence in this book is minor but important.

Up front, the accused looks guilty. She seems to be the only one with any previous connection to Thoseby and she's the only one who could have gone into his room and stabbed him at a time when everyone else is accounted for. In fact, no one could have gone upstairs and entered Thoseby's room without having been seen by staff and/or guests. This almost seems like a locked room murder, except that it isn't. Mlle Lamartine insists she had no motive to kill Major Thoseby as he was not the man who had abandoned her and her then unborn child.

But it's obvious that the present crime harkens back to the past in Basse Loire during the war at the French farm when all were betrayed and rounded up by the Gestapo.

After a short postponement when new counsel is brought on board at the accused's last minute request, the case develops a kind of back and forth rhythm between antics in court and the actual nuts and bolts of the investigation. The trial moves swiftly forward with the tenacious Mr. Macrea in charge for the defense and the law firm of Markby, Wragg and Rumbold, Solicitors of Coleman Street in the energetic personification of junior partner Noel Anthony Pontarlier Rumbold (known as Nap) traveling to France to track down any possible leads. The sense of France just a few years after the war is well established as is the notion that old crimes are not dead and done for.

I am not a huge fan of shifting stances and points of view and the back and forth of locales, except when it's handled expertly. Michael Gilbert is a master at this sort of sleight of hand.

Intrigues, lies, shifting alibis and courtroom theatrics abound in London while in France, Nap follows various and nebulous leads at the risk of his life. In the meantime back at the office, his father Rumbold senior, frets in very British stiff upper lip style. Author Michael Gilbert is so good at creating these sorts of competent men who aren't flashy but have just enough charisma to entertain. He's not bad at fashioning intriguing women either.

What can I say? A terrific book set in a time that still fascinates me.

It's Friday and this week, Todd Mason is doing Forgotten Book hosting duties at his excellent blog,
Sweet Freedom.