Friday Forgotten (or Overlooked) Book: THE HOUSE AT SEAS'S END by Elly Griffiths 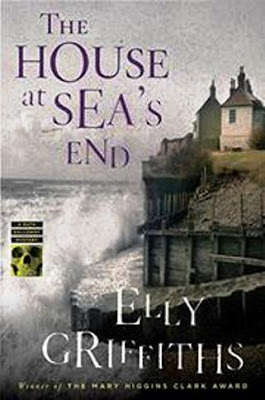 This is not really a 'forgotten' book, but maybe an overlooked one. I hadn't heard of it until very recently myself. It is the third entry (and possibly my favorite) in an excellent series I've just begun reading with great enthusiasm. Actually I've already read six of the books (my local library being very handy to have close-by) because I can read quite quickly when I want to. The books reminds me, in a very singular way, of Julia Spencer Fleming's Russ Van Alstyne and the Rev. Claire Fergusson mysteries set in a cold and snowy upstate New York town. Those of you who are familiar with those books will get what I'm talking about in a moment. Those of you who haven't, well add another great series to your list. Besides this one, I mean.

The main characters in Griffith's series are involved in a long term 'will they or won't they ever wind up together' relationship in which a married cop and a single professional woman are drawn to each other despite the fact that the cop is happy enough in his marriage and loves his wife. Hey, these things happen especially during a very intense criminal investigation in which a child is the victim and turbulent emotions are running high. (See the first book in the series, THE CROSSING PLACES.)

The result of this particular indiscretion is that in this third book, Ruth Galloway is just back from maternity leave and struggling with the dual difficulties of being a new single mother and a Dr. of Archaeology working with the police while also teaching at an university.

But you won't hold it against the doctor, that's how sympathetically her character is written (again in common with Julia Spencer Fleming) and her motivations are understandable. As are Harry Nelson's (the cop involved) mixed feelings of guilt, desire and confusion. For this reason, I'd recommend that the series be read in order of publication. I did exactly that. The various character relationships will be richer for you taking the time to do it this way.

However, if you don't want to, it's not the end of the world but you'd be missing out on the behind the scenes details of ongoing plot lines developed over time by an intelligent writer who has obvious affection for her characters and their various plights. Everything here is evolving book by book and as one might expect, the reader (as well as the characters involved) will begin to take sides.

Dr. Galloway is a forensic archaeologist and head of the archaeology department at the University of Norfolk. Norfolk is a county in mostly rural East Anglia, U.K. The area is bordered by the North Sea and by an estuary known as The Wash. So you can imagine that winters in this section of England might be a trifle frigid and windblown. Most of the books I've read so far seem to have plots which unravel during rainy, cold, icy, winters which add enormously to the atmospherics.

The mystery is almost an afterthought, if you will, an embellishment to the memorable characters which I grew to care about more and more. Plus there's a bleakness of mood and setting which practically make a hot cup of tea a necessity while reading. All good, in my view. And since I'm a big fan of archaeologists in general, I do gravitate towards them when they add solving murder mysteries to their resume.

Now to the plot:

When erosion reveals six skeletons - hands tied behind their backs - in a ravine on a remote Norfolk beach, Dr. Galloway is called in to take a look. Bones are her specialty and she soon determines that these male skeletons are of German extraction. So the cops are dealing with a possible war crime - the coast having been manned by home troops on the look-out for an invasion early in the British part of the war 70 or so years before.

The on-going erosion not only reveals long buried secrets, but continues to peel away at the ground beneath the property perched atop the cliff. The few inhabitants of Sea's End House know that they must soon abandon their home since it will eventually fall victim to the sea. Jack Hastings, the current owner lives there with his elderly mother and his troubled granddaughter. His father, Buster Hastings, was a member of the Home Guard during the war but apparently the family knows next to nothing about six dead Germans found on the beach.

The problem with old crimes is that possible witnesses are surely dead or almost so which makes learning what might have happened that much more difficult. When a veteran in a nursing home is questioned, he winds up dead shortly thereafter. Then another elderly veteran turns up dead in his own home. Whatever information they might have revealed is buried with them. Someone is moving quickly to stop the true story of what happened beneath the cliffs from coming out. Eventually a German journalist shows up looking for answers. As Nelson and Ruth consider that the locals are not telling all they know, another murder occurs unleashing the possibility that Ruth's baby girl, Kate, might be in danger. The last quarter of the book, a fast-paced anxiety inducing race against time in the middle of a coastal snow storm, makes for terrific reading.

Alongside the clever mystery which, by the way, is loaded with clues (though far-fetched, I especially like the clue of the bunch of mystery books left to someone in a will) just in case you're into trying to solve the case ahead of Nelson and Ruth, we get further visits from a continuing cast - various characters who are not only memorable but are the sorts of people one wouldn't mind knowing.

For instance: Cathbad the druid, a good friend to Ruth and an immensely likable hovering presence in a purple cloak. And Shona, a not as likable friend who doesn't know anything about babies, but is happy enough to babysit when desperation calls for it. And Detective Sergeant David Clough, the not-so-politically correct detective and McDonald's aficionado who grows on you as the books progress. And Detective Sergeant Judy Johnson, the female cop of the team who is engaged to be married to her childhood sweetheart as she finds herself intrigued by the guy in the purple cloak.

Author Elly Griffiths makes us care about all these imperfect characters in a way which gives them additional life, her writing style helps the story develop in a very visual way - the way the best books do. I know that devoting oneself to a series takes a dedicated amount of time, but I wouldn't be recommending this particular series if I didn't think it was worth it. And it's not as though there are thirty books involved - there are only 10 including next year's book. AND there is a handy dandy omnibus with the first three mysteries available. I mean, things couldn't get any easier.

And since this is Friday, don't forget to check in at author Patricia Abbott's blog, Pattinase, to see what other forgotten or overlooked books other bloggers are talking about today.