THE RIGHT SIDE by Spencer Quinn 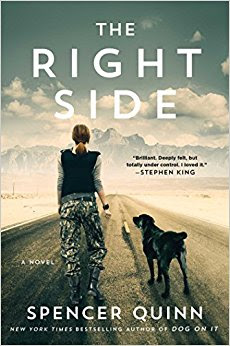 This is the prolific Spencer Quinn's (aka Peter Abrahams) newest novel and perhaps the beginning of a new series, this time out with a moody, damaged female protagonist. Quinn is the mastermind behind the brilliant on-going Chet and Bernie books (which I love) and is also the author of a middle school series which I will probably be looking to become familiar with so I can share it with my grandchildren.

In THE RIGHT SIDE, we meet a fascinating new character, a nearly-ex soldier named LeAnne Hogan, a bitter and disoriented Army officer (awarded a Bronze Medal) with PTSD currently recuperating stateside at Walter Reed hospital. She has lost an eye to an i.u.d. explosion while serving in Afghanistan and has the appropriate unsettling scars which she hides behind an eye patch and large sunglasses. She also has an inoperable piece of shrapnell lodged in an inoperable spot in her skull. Prosthetic eyeballs come into play early on, but not till mid-book does LeAnne bother with one.

Disinclined to play nice, she is a suicidal handful of resentment, grief and simmering anger. As the story evolves we get more and more into her earlier life and how she's arrived at this particular moment in time. This is a woman seemingly born to be a soldier and now that's been taken away. LeAnne Hogan is having to re-introduce herself to herself with all the touchstones removed.

After her hospital room-mate and new friend Marci (who had lost a leg in Iraq) dies suddenly from a blood clot, Leanne takes off on her own, temporarily leaving the world of authority behind. This is not the easiest character to learn to care about because she doesn't give a damn whether anyone likes her or not, but she does become a person whose future concerns us and eventually, yeah, we come to like and understand her.

After ambling around the country by bus and then by beat up used car - she gets a brief visit out of the blue from her worried mother (the army had been tracking Leanne's phone) and they sort of arrange for LeAnne to move in with her and her husband. (LeAnne's parents had divorced years before.) But the idea doesn't grab LeAnne and she takes off again. Eventually she winds up in Belleville, Washington where she remembers that Marci's 8 year old daughter lives with her grandmother. Some vague unfinished business has drawn her there though Leanne isn't sure what that might be, her memory being shot to hell.

While staying at a motel's cabin in the woods, a large black dog shows up one night and adopts an unwilling Leanne - can't put it any better than that. There is a kind of mystical aura surrounding all this which works very well in the context of the story. Especially in the episode where the dog saves LeAnne by valiantly upsetting her suicide attempt. I think if I were the author I would have played up the mystics of dog meets woman even more. But why quibble, it works pretty good as is.

When LeAnn goes to visit the grandmother, she finds out that Marci's daughter is missing - has been since the day before - the day, coincidentally, of Marci's funeral. Despite the fact that the local constabulary dislike her butting in, LeAnne decides that she needs to look for the child.

With the help of Marci's first ex-husband (she had two) and the slightly intimidating presence of husband number two, LeAnne investigates and soon makes a startling discovery.

At the same time, the past comes calling in the form of Captain Stallings, army intelligence, who drops in (literally) to 'request' LeAnne's help (yet again) in ferreting out the truth of who was to blame for the incident in Afghanistan which not only wounded her but killed several others including her commanding officer. This episode which entails a quick flight to Kabul doesn't work as well as it should because it stops the previous story and in an odd way, seems almost pointless (unless it's going to be picked up in a sequel). But again, I kept reading because no matter what I was engaged.

Men writing women doesn't always work, but in truth works better than women writing men (I don't know why) and here, we instantly forget that the author is male. He gets this woman and how her interior operates and that's that.

If you're not familiar with Spencer Quinn, that's too bad. He's a wonderfully inventive writer and if all he'd ever done in his life was create Chet the dog and Bernie the private eye, that would have earned him a trip to Valhalla in my view. This new character he's trying on for size is definitely someone I will want to visit in future if and when another book featuring LeAnne Hogan appears.

It's Friday once again, so don't forget to check in at author Patricia Abbott's blog, Pattinase, to see what forgotten or overlooked books other writers are talking about today.