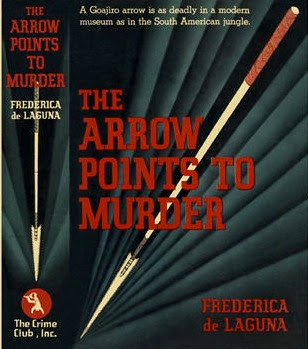 Thanks to John at Pretty Sinister Books, I was recently able to read this cracking good mystery set in one of my all time favorite murder spots: a natural history museum! I think we can all agree that the atmosphere for murder is ripe in this sort of setting. Think about it: creepy animal dioramas, skeletons of all shapes and sizes, weird anthropological minutia, archaeological rarities, exotic botanical samples, ethnological displays, drawers full of bugs and spiders, mysterious bits and pieces of jungle exotica and natural history and best of all, obscure poisons and blow guns! It's a wonder more murders don't occur there.

I first heard about this book (by an author unknown to me at the time) from John's excellent review at Pretty Sinister Books, so if you want a more detailed look at THE ARROW POINTS TO MURDER, go directly there. He does this sort of thing much better than I do.

Behind the scenes at the ornate New York Academy of Natural Sciences teems a hive of highly dedicated scholars and curators. They are as one might imagine, a quirky, scruffy, pedantic bunch overflowing with enthusiasm for their own scientific specialties, each with their own ax to grind, especially when it comes to funding. But on the whole the group is genial enough so that some of them even lunch together at a local aptly named dive, 'Ptomaine Joe's.' Their conversation there is, as you might expect, mostly museum shop talk which I very much enjoyed.

As soon as they were established in the restaurant and had made the dubious choice between wild rabbit (including the shot) draped with gravelly spinach, and flabby ravioli flanked by sinister string beans (more string than legume), Reichenbach pounced upon his audience.

"I've just made a thrilling discovery," he announced, no longer able to suppress the news. "in that batch of lice and fleas that the Hill Museum sent me to identify I found a new type of louse. It's a head louse - the specimens were actually found on the head of one of their oldest Egyptian mummies - but it looks more like a body louse. The type is extinct. And there's no doubt of its antiquity.....Now in Pediculus humanis capitis - head louse to you - the body is somewhat more slender, and the claws for grasping the host's hair are more highly developed than in Pediculus vestimenti - the body louse. In this respect, and in others of a more technical nature -"  Reichenbach, noting the bewildered expressions of his audience, decided to omit these interesting technicalities.

Our sleuth to be is Barton the archaeologist. (The museum is the sort of place where the men all refer to each other by their last names.) In his eagerness to solve the crime he will withhold pertinent information and surmises from the police. His rationale: he insists the cops would never be able to sift through the museum's behind the scenes arcana and day-to-day details in the same way he could. In reality this would place him in great legal jeopardy, but in a book, all is forgiven when the murderer is revealed.

If you (like me) have a liking for esoteric information (not necessarily about head lice) and other obscurities such as curare poison and its uses by jungle tribes and you enjoy reading about museum hierarchy and the nuts and bolts that the museum going public isn't privy to, then this is definitely the book for you.

In the meantime, here's the plot in a nutshell:

When not-so-nice department head Dr. Oberly is found dead on the floor of his office, it is assumed he pricked his fingers on the sharp end of a poisoned arrow. The arrow was part of a shipment of artifacts being packed up for lending to a museum in Russia.

Oberly's death is seen as a tragic accident. But when a second curator dies horribly, gassed in a sealed store room, it appears a murderer lurks in the museum. Dr. Barton deduces this almost immediately, convinced that he alone can solve the crime. He possesses a bit of knowledge that if revealed would put the murderer on his guard.

"...Give me a week! If I can't discover the guilty person withing that time we must call in the police."

An oddity in the story (or so it seemed to me) is the fact that a medical examiner isn't called in until the second death AND neither are the police. Dr. Oberly's body is cavalierly moved and sent off to the funeral parlor without any official notification of the police. One would think that dying from some form of poisoning might be seen as a suspicious death - even if it looks like an accident. I wonder if that was the norm way back then in Manhattan?? No, I don't think so. After all, Nero Wolfe and his ilk were busy then solving crimes in which a dead body always meant the involvement of the cops, one way or another. (Well, most of the time.)

By the way, this very same thing happened in a British mystery I read recently - the body was moved and the cops weren't even called, just a local doctor. Go figure.

At any rate, once the two murders are linked, Barton sets to work with the help of a doctor friend who will contrive to send results of pertinent scientific tests in the nick of time and the aid of the museum's head guard, a man with the unfortunate name of Winterbutt. Barton not only has to find out who the murderer is, but how the killings were done since most everyone has some sort of alibi for the relevant times and there is no apparent motivation to speak of. He has just a few days to solve the thing before his friend must report their suspicions about the second death to the authorities.

The two main reasons I enjoyed this mystery so much were the museum ambiance which added a nicely unique aspect to the story and the often arcane scientific minutia which runs throughout. Who knew that such intrigue goes on behind the scenes in a place where all the exhibits are dusty and long dead?

Oddly enough, I recently read another mystery in which an arrow also plays a part - THE CHELTENHAM SQUARE MURDER by John Bude. It's odd how that happens some times. I mean, it's not like death by arrow is a regular run of the mill occurrence.

John's review of THE ARROW POINTS TO MURDER will reveal pertinent facts about this talented author who, for reasons unknown, only wrote a very few mysteries, hence her dwelling in obscurity. See link above.

Todd Mason, at his blog, Sweet Freedom, is doing meme hosting duties today for author Patricia Abbott who is away. So don't forget to check in at Todd's for the links.