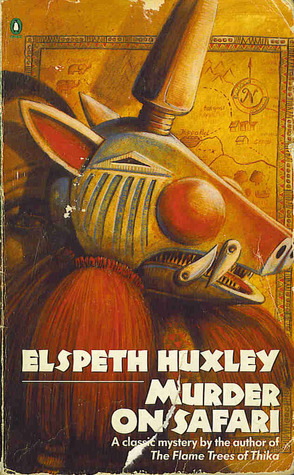 Well, I mean, how can you NOT read a book titled MURDER ON SAFARI? It's almost automatic even if you know going in that there will dead animals. Three of my blogging friends have already written their reviews of Huxley's book though seemingly I was unaware of it until recently. I know, where have I been?

Elspeth Huxley wrote the non-fiction classic, THE FLAME TREES OF THIKA and assorted other books set in the land of her youth (she grew up on a coffee farm in British Kenya) so was very familiar with the African veldt and assorted wildlife. Her knowledge of inhospitable regions is unquestioned and comes through in her vivid descriptions of the land and safari day-to-day.

Of course these sorts of stories usually feature a dead body (it helps if it's a gorgeous female though in this case the female is a little long in the tooth) and a great 'white' hunter and an assortment of witless rich folk 'roughing' it in the wilds of Africa. This group's idea of 'roughing it' is laughable but eccentric enough that you don't hate them for their absurdity - you just sneer, nicely.

Lady Barradale has hired the stalwart Superintendent Vachell to find out who stole her stash of fabulous jewels which she, inadvisedly, insisted on bringing with her on safari. Who brings jewels on safari? Well you might ask - obviously only a very foolish woman. Despite the halfhearted protestations of her hubby, Lady Barradale flaunts her jewels every night at dinner in the jungle then of course has the temerity to be surprised when these jewels go missing.

Turns out that Lady Barradale was carrying on with the second white hunter (there are always two) a young Dutchman who is in love with the lady's step daughter Cara described as 'one of those hard-boiled, prickly girls' and she with him so it did get kind of awkward especially since Cara's fiance is also part of the safari - an affected sort of fellow named Sir Gordon Catchpole. (I know, but THAT'S his name.) He's an interior decorator and seems an odd choice for an heiress, but apparently still waters run deep. 'He was fair and slender and looked delicate.'  Vaguely gay characters were written a certain way back in the day and I can't fault Huxley since most everyone else was writing these fellows in the same fashion. (See Christianna Brand among others.) It was a kind of accepted mindset - I suppose if any sympathy were shown to them, the publishers or even the reading public might have caviled. I don't like the stereotyping but if I continue to read vintage, which I plan to, I will run across this sort of thing now and again.

The short-tempered Lord Barradale appears oblivious not only to his wife's bad behavior but to everything else that goes on around him and spends most of his time fiddling with his cameras. There are nine Europeans in the bunch, four to hunt and five - including a pilot who uses her plane to spot the game and report back to the group - smoothing the way for the others. The animals who die are not exactly given a sporting chance which, by the way, is the subject of a later conversation where Lord Barradale's enlightened view refreshes.

There are also assorted natives and personal valets and such who do the grunt work. And since it is 1938, these Africans are occasionally referred to as 'boys' even among themselves. But none, far as I can see, are treated egregiously. This is just the way it was. In addition there is also a group of renegade natives, members of an especially ferocious tribe, lurking about in the bush. So, lots of atmosphere and lots of danger.

Yes, I know, Yvette actually read a book where animals die. Well, I prepared myself for it - knowing it must happen because at that time people hunting in Africa were not just shooting with cameras. (Though Lord Barradale does spend an inordinate amount of time taking pictures of flora and fauna.) But I gritted my teeth and kept reading - there's not really that much wildlife blood shed. The real blood shed is reserved for the corpse of Lady Barradale which is only found after a wake of vultures has finished dining on her flesh. Nasty.

Later, there's a second murder by wild buffalo. Yes, you read it here first (unless it was mentioned in the previous three reviews). Unique in my experience.

There are also assorted attacks upon the person of Superintendent Vachell who joins the safari masquerading as a hunter though he has no experience being such and his 'disguise' is soon seen through by the lady pilot who apparently knows more than she's letting on. And if you have a plane in a story, it follows that there must, at some point, be a crash. And there is - vividly so.

A very enjoyable book in which the killer remains masked until the very end, at least to me. Superintendent Vachell is not an especially clever chap or for that matter, an engaging one. But he is, as I said, stalwart and bound to do his duty. He is described as tall, bony and sun bronzed and that's good enough for me.